Continuing to contrast his economic approach to the Biden White House, DeSantis said the approximately 25-cent-a-gallon "gas tax relief" proposal could save the average Florida family up to $200 over a five- to six-month period, while reducing state revenue by more than $1 billion. DeSantis wants lawmakers to approve it during the legislative session that starts Jan. 11.

"We've always been very strong on tax relief in Florida. We did things like sportsmen's relief (a sales-tax "holiday" around July 4). We've done back-to-school (tax holidays). We've done all that stuff. And that's good. But this is, I think, really, really big," DeSantis said while at a Buc-ee's convenience store in Daytona Beach.

RELATED: AAA: Thanksgiving gas prices in Florida to be the most expensive in 8 years

Later at a Daily’s convenience store in Jacksonville, DeSantis said, "It's clearly not going to eliminate all the inflation, because it's gone up so much. But it will make a real difference in folks' pocketbooks. And I think we're going to get a lot of good support for that."

Arch "Beaver" Aplin III, owner of the Texas-based Buc-ee's chain, called the proposal a "phenomenal idea" and said he anticipates "most companies" will lower pump prices when the discount is enacted.

"If this, in fact, happens and they lower the tax, the day they lower it we’ll roll back the pumps the entire 25 cents instantly," Aplin said.

"We're doing infrastructure, not just roads, including roads, also the water resources, all that," DeSantis said. "We probably have never had such strong reserves in the history of the state. So, we have the ability to provide relief for people, and I don't think we're going to miss a beat." 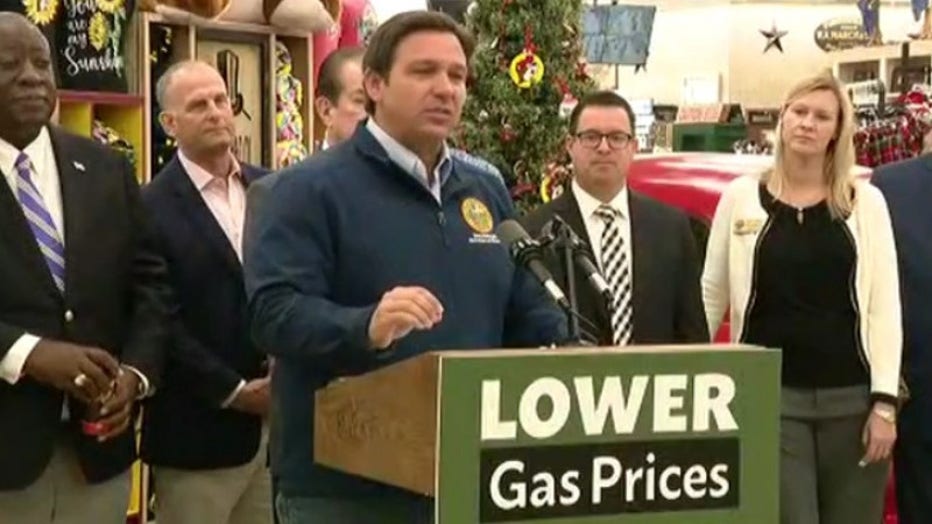 AAA reported on Monday that the average price of gasoline in Florida jumped 10 cents, reaching $3.36 per gallon. That is said to be the highest daily average price since Sept. 2014.

WEATHER ALERT: Cold front to drop temperatures in Central Florida to 30s, 40s ahead of Thanksgiving

"Florida drivers are going to find the most expensive Thanksgiving gas prices in 8 years (2013). The average fill-up will cost $50 for a 15-gallon tank. That's $13 more than what Thanksgiving drivers paid pre-pandemic (2019)," they said.

AAA explained though that gas prices should decline through the holidays.

In the meantime, they said that drivers can save some money at the pump by: