Governor Ron DeSantis has won his bid for reelection in the 2022 midterm election.

TAMPA, Fla. - Governor Ron DeSantis has won his bid for reelection in the 2022 midterm election.

The Republican incumbent carried a 10-point lead over his Democratic opponent, Charlie Crist, who was formerly the Sunshine State’s Republican governor and, most recently, U.S. Representative for Florida’s 13th District in Pinellas County.

The race between DeSantis and Crist was not particularly contentious, however, the candidates made their opposing stances clear on issues like abortion, public health, and the government response to the pandemic.

DeSantis was declared the winner, moments after polls closed in the Panhandle. According to the Associated Press, DeSantis won with 57.2% of the vote, with 73% of the votes counted as of 8:10 p.m. Tuesday.

DeSantis chose Tampa to celebrate his election night victory over Crist. His supporters gathered early to watch the returns. Crist, meanwhile, was just across Tampa Bay in his home district of Pinellas County. 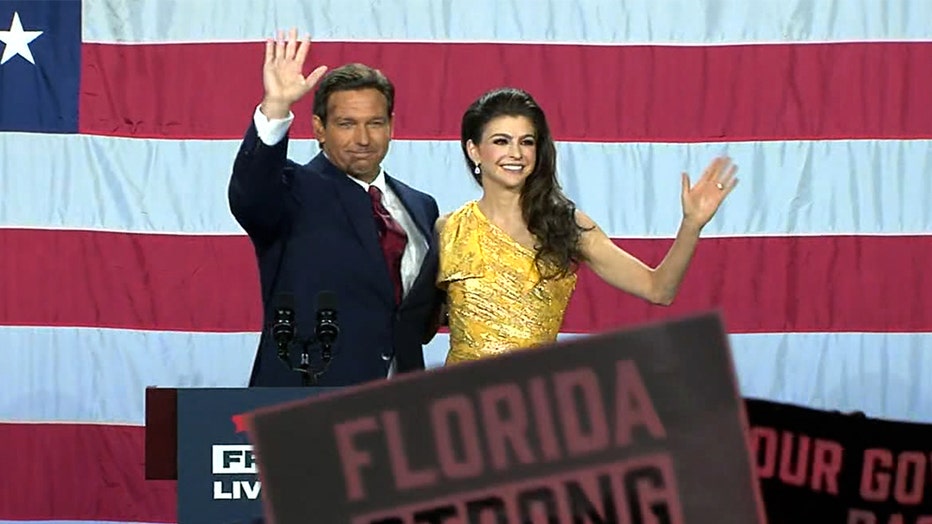 Inside the Tampa Convention Center, the governor's supporters yelled and cheered as the race was called in his favor.

Both candidates had a home court advantage in the race for governor and both have a reason to call Florida’s most populous county home.

DeSantis was born in Jacksonville, but his family moved to Dunedin when he was a child. Crist moved from his hometown in Pennsylvania to St. Petersburg in high school.

But, going into the race, DeSantis had two benefits. Crist did not.

First, DeSantis ran for office as a Republican in the midterm following Democrats taking the majority in the House and Senate, and the White House.

Gov. DeSantis victory speech: 'We have rewritten the political map'

After winning a second term, Gov. Ron DeSantis gave a victory speech at the Tampa Convention Center, saying 'I have only begun to fight.'

Second, and likely more significantly, DeSantis was the popular incumbent governor whose actions during the COVID-19 pandemic were praised by voters from Key West to Jax Beach, and even by then-president Donald Trump.

See a breakdown of how Bay Area counties voted below:

Outside of campaign events during the final weeks of the campaign, DeSantis was highly visible in his governing capacity as efforts to recover after Hurricane Ian were underway.

The governor gave daily, public updates from the Fort Myers area, showcasing his administration’s work to rebuild the Sanibel Causeway and deliver supplies to the hardest-hit areas.

RELATED: More than 15,000 mail ballots flagged in Florida – how to make sure yours is counted

During the campaign, however, DeSantis has dodged the question of whether he is considering a run for president in 2024, which would leave the governor’s mansion vacant halfway through the upcoming term.

In his speech, Charlie Crist congratulated Gov. Ron DeSantis on his re-election after election results showed he lost to the Republican incumbent.

During their only debate, Crist asked DeSantis to verbally commit to staying in office all four years, if he wins. DeSantis remained silent, later citing debate rules that candidates were not permitted to ask each other questions.

It appears the majority of voters in Florida are willing to take their chances, should he decide to aim for higher office in two years. DeSantis, along with his wife, Casey, and their three children, will remain in Tallahassee for the foreseeable future.