On the first day of Pride Month, Florida Governor Ron DeSantis signed the bill into law that bans transgender athletes from female sports teams. The move drew swift condemnation from the LGBTQ community.

JACKSONVILLE, Fla. - Speaking at a private school in Jacksonville on the first day of Pride Month, Florida Gov. Ron DeSantis on Tuesday signed a wide-ranging education bill that includes a ban on transgender females participating on girls’ and women’s high-school and college sports teams.

The measure (SB 1028), one of the most-controversial bills of the 2021 legislative session, will make female athletes’ eligibility for sports teams contingent on their "biological sex" on birth certificates issued "at or near the time of the student’s birth."

"I can tell you this, in Florida, girls are going to play girls’ sports, and boys are going to play boys’ sports. That’s what we’re doing, and we’re going to make sure that that’s the reality," DeSantis said, flanked by Republican lawmakers and student-athletes at Trinity Christian Academy.

Within an hour of DeSantis signing the bill, the Human Rights Campaign announced it intends to file a lawsuit challenging the new law.

"Gov. DeSantis and Florida lawmakers are legislating based on a false, discriminatory premise that puts the safety and well-being of transgender children on the line," Human Rights Campaign President Alphonso David said in a statement.

Under the measure, which is set to go into effect July 1, student-athletes who contend they are "deprived of an athletic opportunity" because of violations of the law will be able to sue their schools or colleges.

"We’re not just setting a standard, we’re also providing ways where that fairness and the equality can be enforced on behalf of our girls and our women athletes," DeSantis said. 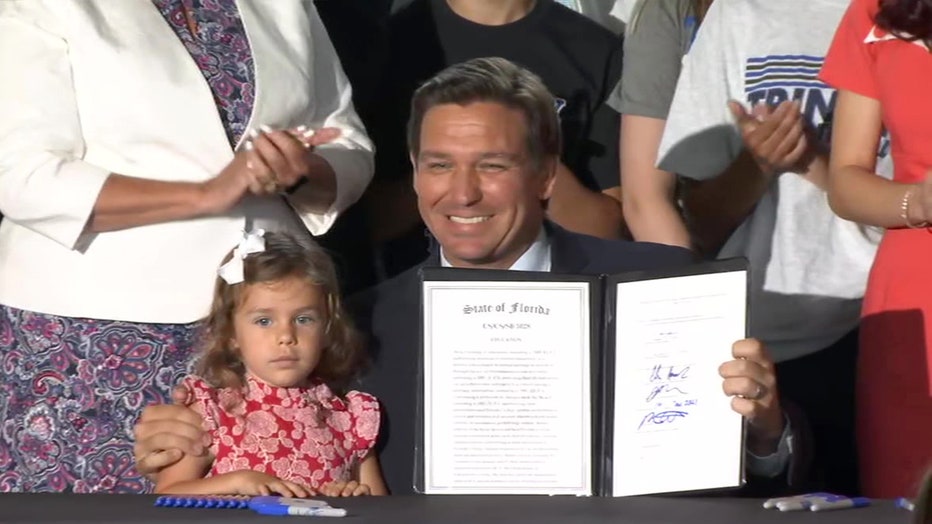 The measure also sets up a potential showdown between colleges and universities that comply with the new law and the National Collegiate Athletic Association, the main governing body for college sports.

In April, the NCAA issued a statement that said "only locations where hosts can commit to providing an environment that is safe, healthy and free of discrimination should be selected" for such things as tournaments and championship events.

The new law would give colleges and universities a cause of action to file lawsuits "against the governmental entity, licensing or accrediting organization, or athletic association or organization" if they suffer "direct or indirect harm" related to violations of the law.

DeSantis took aim at the NCAA during the bill-signing event Tuesday.

"We will stand up to groups like the NCAA who think that they should be able to dictate the policies in different states. Not here, not ever," DeSantis said.

During the legislative session, opponents of the bill pointed to lack of complaints in Florida about participation of transgender student-athletes in sports. At Tuesday’s  event, Republicans enlisted the help of a student-athlete from Connecticut in trying to make the case for what’s dubbed the "Fairness In Women’s Sports Act."

"Sports have always had separate rules to ensure fairness. Everyone should have the chance to participate in sports, but they need to compete where it’s most fair," said Selina Soule, a track-and-field athlete who was part of a group that sued the governing body for Connecticut high-school sports.

Florida Senate Democrats, however, criticized the legislation as being purely political and not aimed at solving a real problem. The ban was added to a bill that largely focuses on charter schools in the waning days of the legislative session that ended April 30. A stand-alone bill on the transgender issue had earlier stalled in the Senate.

"By folding the transgender ban into the charter school legislation, Republicans in Tallahassee rejected both science and reason, openly attacking vulnerable LGBTQ+ children without a single shred of evidence that a problem even exists," the Senate Democratic caucus said in a prepared statement.

"The consequences for states that have passed anti-LGBTQ+ laws are clear --- bigoted policies lead to major economic loss. Today, Gov. Ron DeSantis allowed ignorance to prevail and took our state backwards in the fight for LGBTQ+ equality. We won’t forget it," Eskamani said in a statement Tuesday.

The NCAA did not immediately respond to questions Tuesday from The News Service of Florida about whether future tournaments and championship games are at risk of being moved from the state.

DeSantis’ signing of the bill --- and the timing --- riled LGBTQ advocacy groups.

Equality Florida, which fought the bill during the legislative session, announced that a series of rallies will be held in the state to "fight back" and "protect trans kids."

The governor was asked Tuesday about the message he was sending by signing the legislation on the first day of Pride Month.

"It’s not a message to anything other than saying we’re going to protect fairness in women’s sports," DeSantis responded.