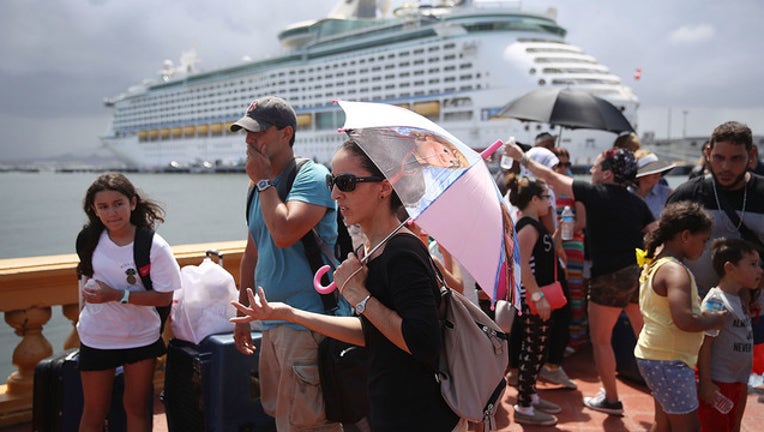 Evacuees line up to get on a Royal Caribbean relief boat that is sailing to Ft. Lauderdale, Florida from San Juan, Puerto Rico.(Photo by Joe Raedle/Getty Images)

Noting that more than 140,000 Puerto Ricans have arrived in Florida since the powerful storm devastated the U.S. territory in September, Gov. Rick Scott directed the Division of Emergency Management to place the State Emergency Operations Center in a “Level 2” status.

“This will ensure that local, state and federal agencies are all working together and enhance the delivery of resources at the state's disaster relief centers at Miami and Orlando international airports as they prepare to assist more families with services like crisis counseling, educational resources, job placement services, medical services and help getting housing and drivers licenses,” Scott said in a prepared statement.

The state designation follows a Federal Emergency Management Agency announcement that it will offer the option to relocate to the U.S. mainland to about 3,000 Puerto Rican residents still in shelters after Maria.

Scott, who declared a state-of-emergency on Oct. 2 as Florida prepared for the arrival of people from Puerto Rico, traveled to the Caribbean island last week with utility officials to discuss power restoration efforts.

FEMA's Transitional Shelter Assistance program, according to its website, "provides short-term lodging assistance for evacuees who are not able to return home for an extended or indeterminate period of time following a disaster."

The federal agency usually covers hotel costs for storm victims until they can find long-term housing. However, in Puerto Rico, hotels remain at capacity.

FEMA is working on agreements with New York and Florida to handle storm evacuees on a temporary basis.

The governor's office said Florida expects to be repaid by the federal government for expenses related to FEMA's assistance program.