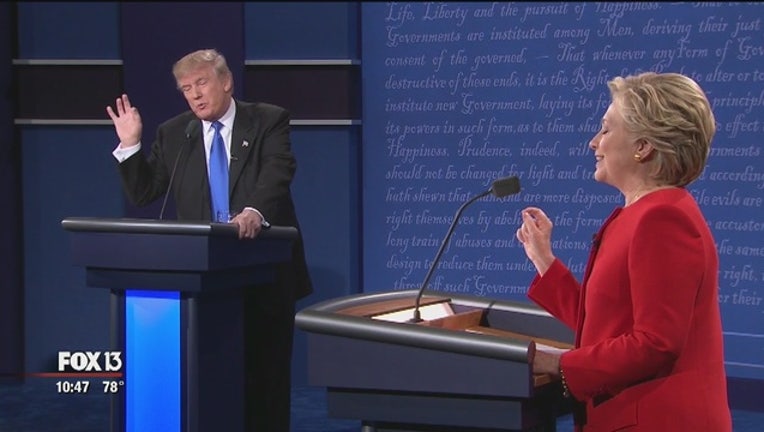 TALLAHASSEE (NSF) - One of the noisiest, most bizarre and seemingly longest campaign seasons in American history careened toward the finish line Monday, with candidates at all levels zipping across Florida as major races remained up for grabs.

The presidency and control of the U.S. Senate could very well be decided today in the Sunshine State. Republican presidential nominee Donald Trump needs Florida's 29 electoral votes in his fight with Democratic nominee Hillary Clinton for the White House, and incumbent U.S. Sen. Marco Rubio, also a Republican, is trying to fend off a re-election challenge from Democratic Congressman Patrick Murphy.

Voters were also set to pick the winners in 26 of the state's 27 congressional districts --- Miami Congresswoman Frederica Wilson doesn't have a general-election opponent --- and dozens of legislative seats, with Democrats hoping to make gains on both fronts, even if outright control seems unlikely. And a pair of high-profile constitutional amendments, one dealing with solar power and the other with medical marijuana, also faced final decisions.

More than 6.4 million Floridians had already cast ballots by Monday afternoon, either through the mail or through in-person early voting, leaving partisans scouring the tea leaves to search for a pattern. But the push continued for millions of more votes to be finalized on Tuesday.

Trump, meanwhile, tried to rally support during a campaign stop in Sarasota.

Late-breaking polls indicated that Clinton and Trump were virtually tied in the state, while most surveys gave Rubio a lead ranging somewhere between a little and a lot --- though many showed his lead hovering within the margin of error.

Biden tried to tie Rubio with the more unpopular Trump, whom Rubio endorsed after a bitter fight when both men were running in the Republican presidential primaries.

"You got a guy running for the United States Senate here ... who says that he disagrees with Donald Trump on these things, but doesn't have the courage to stand up and say, 'I won't vote for him.' ... Ladies and gentlemen, this goes to your character," Biden said.

Later, he added: "These guys are cut from the same political cloth."

Both sides claimed to see positive signs in the early voting totals.

"This is an 81,000-vote improvement, which completely erases the margin that Romney lost by," Dunn said.

"What we see today is very encouraging," he said.

But veteran Democratic strategist Steve Schale said on Twitter that the early-voting electorate was more diverse in 2016 than four years earlier, in large part thanks to rapid growth in voting by Latinos. Trump has angered many Hispanics with charged comments about immigration.

"Need to look at more data, so not ready to predict a spread (though I have number in mind), but the majority of data looks good for HRC," Schale wrote, using Clinton's initials.

Republicans were expected to maintain a majority of the seats in the state's congressional delegation, but a few districts bear watching Tuesday. Republican Congressman David Jolly is fighting former Gov. Charlie Crist in a district in Pinellas County, while South Florida features a battle between U.S. Rep. Carlos Curbelo, a Republican, and his Democratic predecessor, former Rep. Joe Garcia.

U.S. Army veteran Brian Mast, a Republican, could take the congressional seat in northern Palm Beach County and the Treasure Coast that Patrick Murphy is vacating to run for the Senate. Mast is locked in a race with Randy Perkins, who made his fortune in disaster relief.

In the Legislature, Democrats were hoping to get back to at least 41 seats in the Republican-dominated House, giving them more leverage over the flow of legislation in chamber. They are at 37 seats now. And they were looking to get closer to parity in the Senate, which currently features 26 Republicans and 14 Democrats.

But Valerie Scoon, a professor from Florida State University who attended the Biden rally in Tallahassee, might have highlighted what the day meant to many Floridians.

"I think we just mostly feel excitement about this election, and some relief that we are going to be able to move forward past the election season," she said.