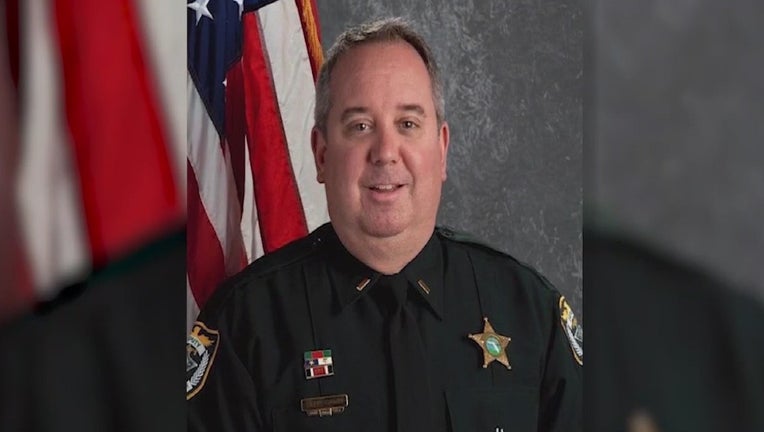 VIERA, Fla. - The president of a Fraternal Order of Police chapter along Florida’s Space Coast was suspended by a sheriff’s office as it investigates him for a social media post over the weekend that encouraged officers linked to departments accused of using excessive force during recent protests to apply for jobs in Florida.

Brevard County Sheriff Wayne Ivey said at news conference Tuesday that Lt. Bert Gamin had been suspended from his agency as an internal investigation is conducted.

“I’m embarrassed by it. I’m infuriated by it, and I’m having it investigated,” Ivey said.

Earlier in the week, Gamin, president of the Fraternal Order of Police lodge in Brevard County, Florida had called his post “in poor taste” in a statement sent to local news media.

The message posted over the weekend on the Brevard FOP Facebook page said, “Hey Buffalo 57 ... and Atlanta 6 ... we are hiring in Florida. Lower taxes, no spineless leadership or dumb mayors rambling on at press conferences ... Plus ... we got your back!” It ended with the hashtags “lawandorderflorida” and “movetowhereyouare.” 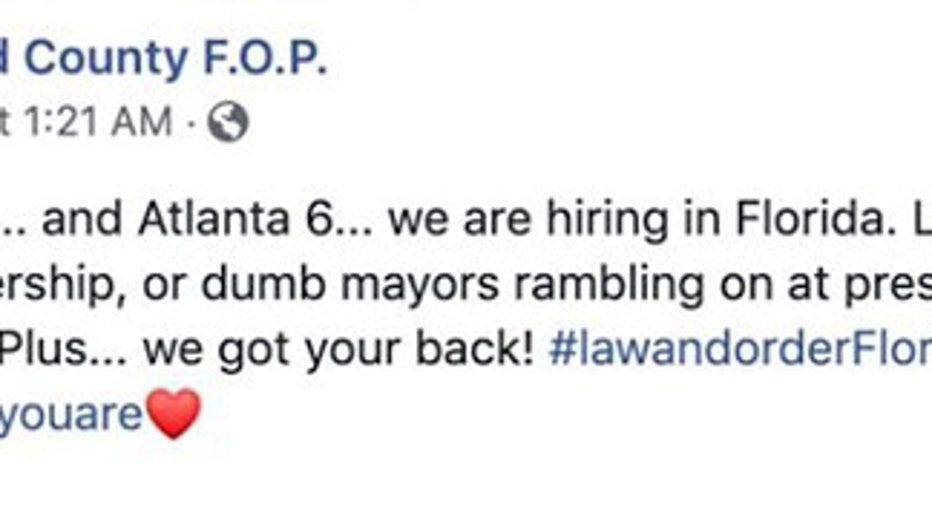 Tweet from Brevard County F.O.P., which has since been removed

In Atlanta, two officers were fired and face criminal charges after video showed them using stun guns on two college students pulled from a car that was in traffic during a large protest. Four other officers were placed on desk duty.

In Buffalo, New York, dozens of police officers stepped down from the department’s crowd control unit last week, objecting to the suspensions of two fellow officers in the shoving of a 75-year-old protester who fell and injured his head.

Earlier this week, Gamin sent the following message, apologizing for the post:

"This weekend I made a posting on social media which was in poor taste and did not reflect the sentiment that I was trying to convey. For that, I humbly apologize to all of you.

I would especially like to apologize to all the men and women in law enforcement across the country who report to work every day and conduct themselves like the true professionals that they are. Their job is hard enough already and I'm afraid my actions just made it that much harder.

I have been a proud member of law enforcement for over 28 years and have spent my entire law enforcement career advocating for and supporting good cops who serve our communities with pride and professionalism every single day. In my recent FB post, I let my emotions and frustration with all the negative media portrayals of law enforcement get the better of me.

My intent was to rebut some of the negative messaging and offer a supportive message to all the men and women in law enforcement, clearly I failed. I offer this to you not as an excuse, but simply as an insight to my thoughts. I admit that my post was insensitive and wrong and that it did not convey the actual thought that I was trying to communicate.

Good cops do great work every day. I deeply regret the my original post and sincerely apologize to all who have been negatively affected by it."