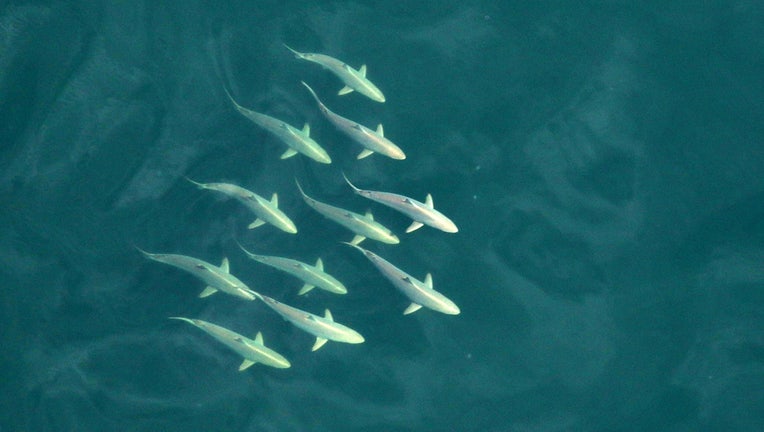 A group of 11 sharks swim together about 12 nautical miles offshore of New Smyrna Beach, FL on March 9, 2019. The school is likely comprised of spinner sharks (Carcharhinus brevipinna) known for their leaping and spinning behavior. (Florida Fish and

The incidents haven’t made the waters deadlier. But as conservation efforts have helped some shark species repopulate, the encounters appear more prevalent amid reports of sharks consuming catch before it’s brought onto boats or shortly after it is released back into the water, said Jessica McCawley, director of the Florida Fish and Wildlife Conservation Commission’s Division of Marine Fisheries Management.

While such interactions aren’t new, they have an economic impact, and a possible need for new regulations is under review, McCawley said.

"There's evidence of learned behavior, such as sharks associating the sound of an engine or a spear gun being shot underwater with an easy meal," McCawley said. "These increased interactions are a likely outcome of successful management of both sharks and prey. And increases in sharks combined with increasing fishing participation equals more interactions, and determining which potential management steps to take is challenging."

Guy Harvey, a wildlife artist and conservationist, told the commission during a meeting Wednesday that the interaction problem is with humans, not the rebounding shark population.

"The shark is not an invasive species. We cannot treat it as the enemy," Harvey said. "We need to learn more about the species. I think the FWC (Fish and Wildlife Conservation Commission) needs to spend more time and effort researching the lesser-known species, especially those coastal species that have really suffered from severe depletion, like the lemon sharks, the great hammerhead, the bull sharks and the black tips (which) have definitely accounted for a lot of these interactions." 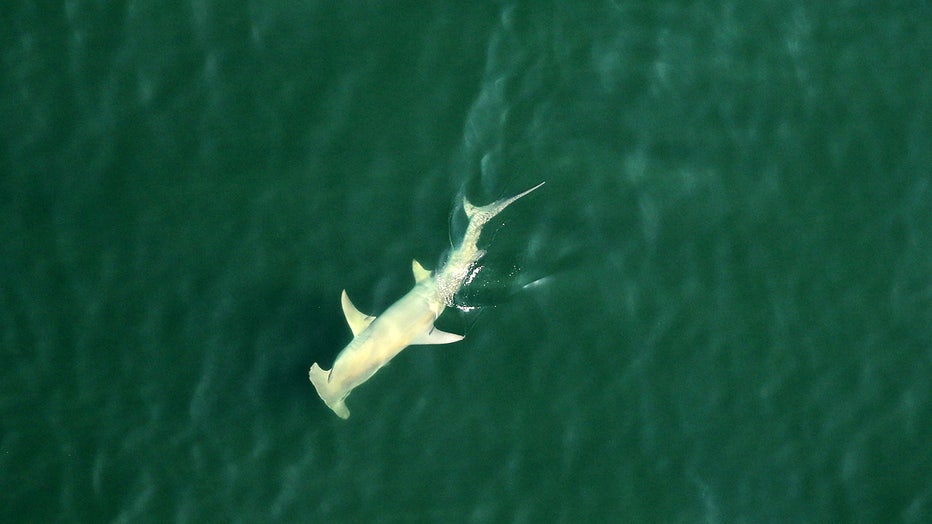 Harvey was part of a panel discussion on the issue. Robert Hueter, a shark scientist at Mote Marine Laboratory, said many of the shark interactions are being reported by people who started fishing after the 1990s.

"We've achieved real success in shark conservation, a goal that, quite frankly, was laughable in the ‘Jaws’ era, leading up to the 1990s," Hueter said. "Since then, we've come to understand the vulnerability of sharks to fishing pressure and the important role they play in marine ecosystems. And we've also put the risk of shark bites on humans in the proper perspective."

But Mike Merrifield, owner of Wild Ocean Seafood Market in Titusville and the Cape Canaveral Shrimp Co., said shark interactions are significantly higher than ever, and the negative economic impact is worse than ever.

"Shrimp nets are being shredded by sharks," Merrifield said. "Gear damage equates to hundreds of thousands of dollars per vessel per year, just from sharks. And this does not include the cost of lost fishing days and the lost product that ripples through the seafood supply chain."

"We were seeing five times what we saw three, four years ago. And it's not going to stop, you know, until something happens," Taylor said. "So, we're at a crossroads, I'm going to have to change my rigs."

Taylor suggested the state could start adding the number of fish lost to predators into daily catch reports charter operators have to file.

For a period of about 20 years starting in the mid-1970s, shark stocks declined due to upticks in harvesting, with demand growing for such things as shark meat and fins.

More than 50 shark species can be found along the Atlantic coast, of which 16 can be harvested in Florida waters. The state began protecting some of the larger, more-targeted species in the early 1990s.

Evidence shows that some species, such as the blacktip and Atlantic sharpnose sharks, have rebounded, but others continue to be overfished.

The commission in December directed staff members to review the status of sharks on a prohibited-species list, state recreational and commercial regulations and the rationale for the regulations. McCawley said a final report is expected later this year.