Truman and Eleanor are two dogs who are being trained by the Florida Fish and Wildlife Conservation Commission to track down invasive pythons in the Everglades.

TALLAHASSEE, Fla. - Truman, the python-sniffing black Labrador retriever, recently tracked down his first snake in a new program Florida is using to eradicate the invasive species.

The Florida Fish and Wildlife Conservation Commission recently began training Truman and another dog named Eleanor to detect a python’s scent and alert handlers when they’ve come across one. The first success was last week when Truman found an 8-foot Burmese python in the Rocky Glades Public Small Game Hunting Area in Miami-Dade County.

“We’ve got to stay innovative. We’ve got to try new approaches and the detector dogs is just one area where we’re doing that,” commission Executive Director Eric Sutton. told commissioners during an update Wednesday.

He showed commissioners pictures of the dogs during a virtual meeting, including one with Truman standing behind the massive snake he found.

“They’re hard workers, commissioners. They really are very dedicated and you can see that they’re very proud and they should be,” Sutton said. 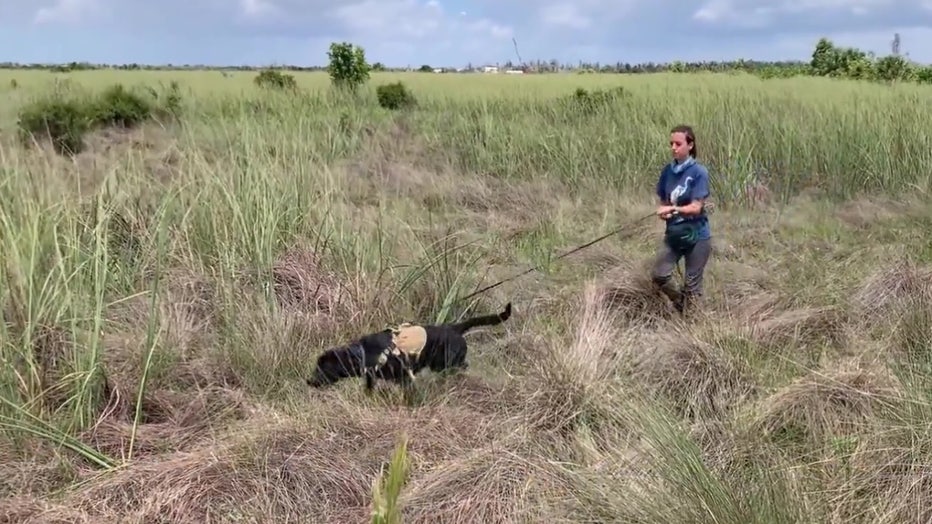 Estimated to number between 100,000 and 300,000, pythons have become a threat to the fragile Florida Everglades ecosystem as they devour native mammals and birds, disrupting the natural balance of predator and prey. They’ve been successful at reproducing in the swampy Everglades because they have no predators. Females can lay up to 100 eggs.

Trainers use python-scented towels and live pythons with surgically implanted trackers to teach the dogs to pick up a snake’s scent. The dogs were trained for more than a month before going out in the wild, according to the agency’s website.

And while Burmese pythons have been known to eat small alligators and small deer, Truman and Eleanor are trained to stay about 3 feet away from the reptiles.

The battle to contain the pythons in the Everglades and nearby areas has been a difficult one for Florida, and Republican Gov. Ron DeSantis made increasing eradication efforts a budget priority. He also signed a bill that allows drones to be used to track down the snakes.

Sutton told commissioners that snake hunters hired by the state captured about 6,300 pythons over the last four years. He said nearly 40% of that total was in 2020 alone and credited the governor for the increased attention on the problem.