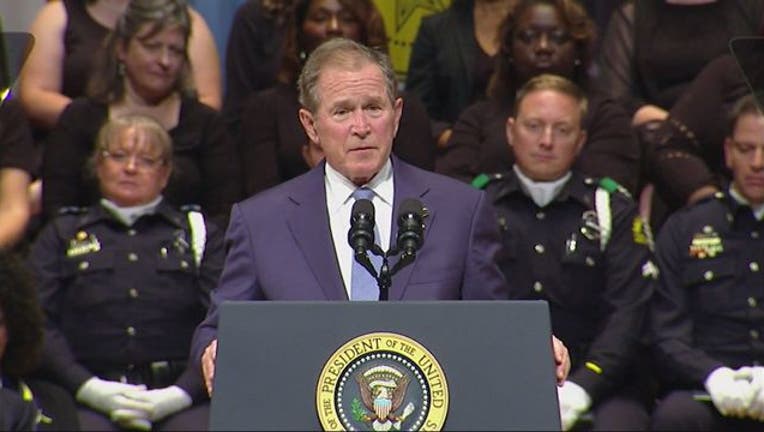 Freddy Ford says the most recent Republican president voted "none of the above for president and Republican down-ballot." That means Bush voted for Republicans in congressional and local races.

It's not a complete surprise. The Bush family includes the two most recent Republican presidents but neither endorsed nor campaigned for the billionaire businessman who captured the party's nomination. Former Florida Gov. Jeb Bush was a one-time favorite to win the GOP presidential nomination until Trump got into the race and branded him with a name that stuck: "Low energy."

Preliminary presidential exit polls results suggest that a clear majority of Americans going to the polls Tuesday have at least a moderate amount of confidence that votes will be counted accurately.

About half of those polled for The Associated Press and television networks told Edison Research they are very confident in the results. Another third said they are somewhat confident.

Fewer than one out of five say they're not very confident or at all confident in the vote count.

Republican presidential nominee Donald Trump has railed against the electoral system. He's called it rigged and suggested without evidence there is widespread voter fraud that could affect the outcome.

Just more than half of voters going to the polls Tuesday approve of the job President Barack Obama is doing. But a majority is still upset with the way the federal government is working.

That's according to preliminary results of the exit poll conducted for The Associated Press and television networks by Edison Research.

Just under half of those surveyed say they're dissatisfied with the government's performance. About a quarter say they're angry.

About four out of 10 voters said the top quality they're looking for in a candidate is change. That outranks good judgment, the right experience and caring about people like you as the preferred qualities in a president.

Arizona's most populous county may not know its vote totals today, which could leave in doubt the presidential race in the traditionally Republican-voting state.

Maricopa County, which includes Phoenix, expects to have more than 350,000 uncounted early ballots by the time the polls close. Roughly 1.1 million voters in the metropolitan county had returned early votes as of Tuesday, up 140,000 from 2012.

Election workers had counted roughly 800,000, leaving more than 200,000 to count. Roughly 150,000 are expected to have been dropped off at polling sites around the county.

Elizabeth Bartholomew, communication manager for Maricopa County Recorder's office, says, "If there's a large enough gap in votes, you might not be able to call some races."

Republican Donald Trump and Democrat Hillary Clinton were running neck-and-neck in Arizona, carried by Republicans in all but one election since 1952.

Neither Donald Trump nor Hillary Clinton is able to claim favorable standing with a majority of the U.S. electorate.

Six of 10 voters say they are somewhat bothered or bothered a lot by Clinton's use of a private email server while secretary of state, according to preliminary results from exit polling conducted by Edison Research for The Associated Press and television networks.

More than seven out of 10 presidential voters say they are irked by Trump's treatment of women.

Trump hammered Clinton for how she handled classified information at the State Department. The FBI twice said it had no cause to pursue criminal charges.

Fewer than half of voters who cast presidential ballots say they made their choice out of a strong preference for their candidate.

That's according to preliminary results of the exit poll conducted for The Associated Press and television networks by Edison Research.

The early exit polls found both Republican Donald Trump and Democrat Hillary Clinton are viewed unfavorably by a majority of the presidential electorate. A majority of the electorate also distrusts each of them.

A third of voters said they have reservations about the candidate they backed. A quarter of voters say their vote was mostly about opposing another candidate.

In 2012, the presidential electorate was more optimistic about their choices. That year, about two out of three voters said they strongly backed their candidate.

Seven in 10 Americans going to the polls Tuesday say they think immigrants now in the country illegally should be allowed to stay. Just a quarter say they should be deported.

More than half say they oppose building a wall along the Mexican border to stop illegal immigration, according to preliminary results from the exit poll conducted for The Associated Press and television networks by Edison Research.

But immigration isn't necessarily at the top of the minds of most voters. Just 1 in 10 say immigration is the most important issue facing the country.

Republican Donald Trump made cracking down on immigration a top item on his agenda.

Most voters going to the polls Tuesday have a pessimistic view of the U.S. economy.

According to preliminary results of an exit poll conducted by the Associated Press and television networks by Edison Research, about 6 in 10 describe the state of the economy as not so good or poor.

But that economic unhappiness isn't as high as it was in 2012, when three-quarters called the economy not so good or poor.

Among voters today, 3 in 10 say their personal financial situation has gotten better in the last four years, while nearly as many say it's gotten worse.

More than half of voters say the economy is the most important issue facing the country, over terrorism, foreign policy and immigration.

Authorities have beefed up Election Day security for Donald Trump by parking dump trucks filled with sand outside his Trump Tower building on Fifth Avenue.

Police said Tuesday that similar precautionary measures were being taken at other sites around midtown Manhattan where Trump and Hillary Clinton plan to spend election night.

Authorities say the heavy trucks could block an attempted car bombing. They say there are no confirmed terror threats.

The NYPD had previously said it will deploy more than 5,000 police officers to keep order on election night. The deployment also includes police helicopters, mobile radiation detectors and bomb-sniffing dogs.

A state judge in Nevada has denied a request from the Donald Trump campaign to preserve ballots and voting materials related to what the campaign alleges were irregularities during early voting.

Clark County District Court Judge Gloria Sturman said Tuesday that making the names of poll workers part of the court record could expose them to "public attention, ridicule and harassment."

She says the county registrar is already required to keep the records, and the Nevada Secretary of State is responsible for investigating the complaint.

Trump campaign attorney Brian Hardy told the judge he wants to preserve records from the final day of early voting at four locations in the Las Vegas area.

The campaign says allowing people to vote past closing time was illegal, but the county says they were accommodating people already in line.

The Trump campaign lodged a separate complaint with the secretary of state.

A software glitch that indicated scores of voters showing up at the polls had already cast ballots has led to voting delays in one of North Carolina's most heavily Democratic counties.

North Carolina Board of Elections lawyer Josh Lawson says officials in Durham County quickly concluded that there was a problem with their electronic poll books and began relying on paper rolls to confirm voter registrations. Attempts to vote twice are rare.

Lawson says there's no indication "nefarious activity" caused the computer problems. Rather, he said it could have been a failure to clear out caches of votes cast during the primaries.

About two dozen other counties using the same software have not reported problems.

Lawson said those in line when the polls close will still be allowed to vote.

President Barack Obama is hitting the radio airwaves to encourage Americans to go to the polls to vote for Hillary Clinton.

The White House said Obama gave Election Day interviews to six radio stations that target listeners in Orlando, Detroit and Philadelphia. The cities are in states where the race is believed to be close between Clinton and Republican Donald Trump.

Obama told syndicated host Jana Sutter that continuing the work of the past eight years depends on having a "steady, smart, serious" president follow him into office.

He praised Clinton and reiterated his view that Trump is unfit to be president.

Donald Trump is rekindling his unsubstantiated concerns about a rigged election system.

Asked Tuesday afternoon on Fox News if he would accept the election results, Trump continued to demur.

The Republican presidential nominee said: "We're going to see how things play out."

He said. "I want to see everything honest."

Concerns about voter intimidation and fraud led to a flurry of lawsuits in the run-up to Election Day. New voter regulations in more than a dozen states also held the potential to sow confusion at polling places.

But at least in the early going, most of the problems at polling places appeared to be routine — the kinds of snags that come every four years, including long lines, machines not working properly, and issues with ballots or voter rolls.

Asked whether he was feeling nervous about the presidential election outcome, Obama said "I think we'll do a good job" as long as the American people vote.

Lines were long in some areas as voters chose between Democrat Hillary Clinton, Republican Donald Trump and some third-party candidates.

Obama said he hopes everyone has "voted early. If not, get out there."

Obama supports Clinton and voted early last month in his Chicago hometown. He spoke while walking from the White House residence to the Oval Office, following his Election Day tradition of playing basketball with friends.