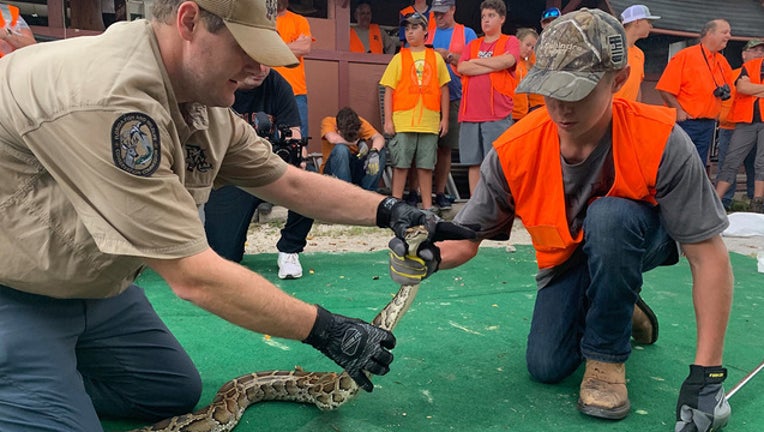 TAMPA, Fla. - Even some of Florida’s youngest hunters get to help out with the state’s effort to eradicate invasive pythons.

The results of Florida’s python eradication programs are well documented, but it’s not every day that they have this kind of help. For the first time, FWC’s Python Action Team welcomed some participants of the Youth Hunting Program for a "highly supervised" python roundup last month in Broward County, and the team managed to snag four of the dangerous snakes.

FWC’s Youth Hunting Program is meant to introduce the state’s teens to hunting and conservation by providing mentored hunting opportunities. It’s open to boys and girls between the ages of 12 and 17 who have passed a hunter safety course and are accompanied by a parent or guardian.

The youth hunts usually focus on more traditional wildlife like deer, turkey, hogs, waterfowl, and other small game. But this first-ever hunt -- at the Everglades and Francis S. Taylor WMA and Rocky Glades Public Small Game Hunt Area -- was all about pythons, which are an invasive species that threaten to upset the state’s ecosystem, especially in the Everglades.

"The educational weekend began with participants learning about the negative impacts of releasing exotic species in the Everglades. In addition, python program experts provided information about snake identification, how to safely and responsibly catch and remove invasive pythons, and the rules and regulations associated with python removal," FWC spokesperson Tammy Sapp told FOX 13.

Adult guides "gained control" of the pythons, Sapp explained, before the younger participants helped with the removal process.

The snakes were killed humanely, FWC noted. Typically, they are used to create goods like boots and wallets.

FWC says more youth python roundups are planned for 2020, but not scheduled yet.