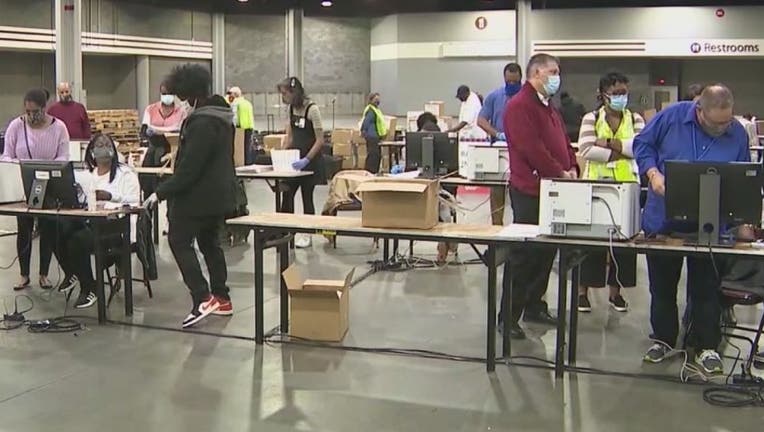 It was the second defamation lawsuit by Fulton County election workers Ruby Freeman and Wandrea "Shaye" Moss this month over debunked claims they introduced suitcases of illegal ballots and committed other acts of election fraud to try to alter the outcome of the presidential election in Georgia. The pair, a mother and daughter, sued conservative website The Gateway Pundit on Dec. 2.

The lawsuit filed Thursday says One America News Network continued to accuse Freeman and Moss of wrongdoing even after Georgia election officials refuted the allegations against them. Giuliani, a lawyer for former President Donald Trump, appeared frequently on the network and along with OAN, "continued to publish and amplify the lie," according to the suit filed in federal court in Washington.

In a phone call with Georgia Secretary of State Brad Raffensperger on Jan. 2, Trump pressed the Republican official to "find" votes for him and mentioned Freeman by name, calling her "a vote scammer, a professional vote scammer and hustler."

Freeman worked as a temporary election worker during the 2020 election, verifying signatures on absentee ballots and preparing them to be counted and processed. Moss has worked for the Fulton County elections department since 2012 and supervised the absentee ballot operation during last year’s election.

The suit says Freeman and Moss received "an immediate onslaught of violent and racist threats and harassment" as a result of the false claims against them and are "afraid to live normal lives." It seeks punitive damages as well as a court order requiring the defendants to remove false statements about Freeman and Moss from their websites and other media channels.