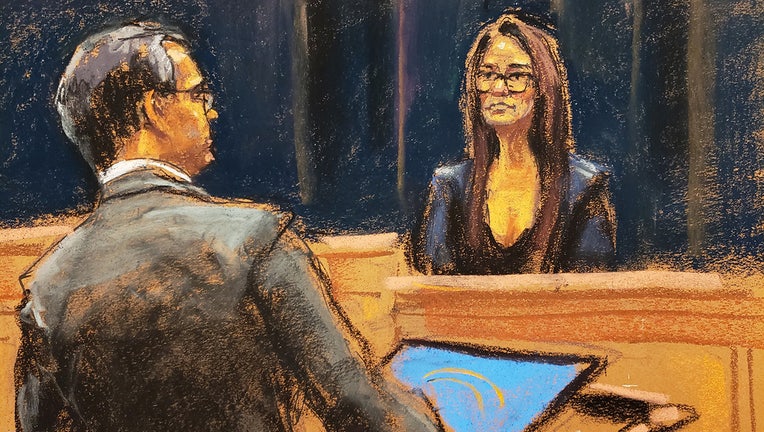 NEW YORK - A former office worker for financier Jeffrey Epstein testified Thursday as the first defense witness at the sex abuse trial of Ghislaine Maxwell, telling jurors she did not witness misconduct by Maxwell while working closely with her for six years.

"Never," Cimberly Espinosa responded when asked if she ever saw Maxwell or Epstein "engaged in any misbehavior."

Espinosa also testified about seeing a key accuser in the case — who testified for the government as "Jane" to protect her privacy — visiting Epstein’s New York City office on Madison Avenue "a few times" in the late 1990s. She said Jane’s mother had told workers she was Epstein’s goddaughter.

Because of that, "She was treated with utmost respect," Espinosa said. Jane’s interactions with Epstein gave her the impression "it was a loving relationship," she added.

Espinosa told the jury in federal court in Manhattan she assisted Maxwell in managing Epstein’s multiple high-end properties between 1996 and 2002, saying "I looked up to her very much."

The defense case began after the jury heard four women detail accusations, including Jane, that they were teens when they became victims of a sex-abuse scheme devised by Maxwell and Epstein. The British socialite's attorneys are expected to make their case that Maxwell isn't the one to blame.

The government's case lasted only two weeks and the defense case could last just two days. Both sides streamlined their witness lists without revealing why, making the trial end well short of an original six-week estimate.

The start of the defense case has already sparked the usual speculation about whether the high-profile defendant will take the witness stand in her own defense — a gamble that is almost never taken. Either way, U.S. District Judge Alison Nathan will have to receive direct confirmation from Maxwell about her decision before the defense can rest.

Maxwell, 59, has pleaded not guilty to charges she acted as Epstein’s chief enabler, recruiting and grooming young girls for him to abuse during sexual massages.

Maxwell was once Epstein’s girlfriend before becoming a trusted employee. Witnesses testified the pair exploited them between 1994 to 2004 at Epstein’s homes, including an estate in Palm Beach, Florida; his posh Manhattan townhouse; and a Santa Fe, New Mexico, ranch.

The defense has insisted that Maxwell is being made a scapegoat for alleged sex crimes by Epstein, who killed himself in jail in 2019. Her lawyers have sought to show that the accusers exaggerated Maxwell's involvement at the behest of lawyers seeking payouts for the women from civil claims against the Epstein estate.