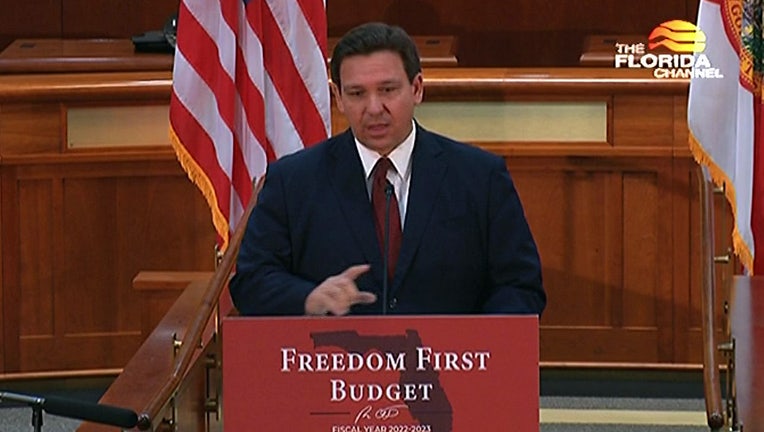 TALLAHASSEE, Fla. - Saying that Florida is "clicking on all cylinders," Gov. Ron DeSantis on Thursday proposed an election-year $99.7-billion budget that would funnel money to education, the environment and law-enforcement officers while giving motorists a temporary gas-tax break.

The proposal, which came as DeSantis runs for a second term in November, will be a starting point for lawmakers as they negotiate a spending plan during the legislative session that will start Jan. 11.

"This is a huge, huge budget. This is a huge deal," DeSantis said during a news conference at the Capitol. "This is something that is going to have very positive effects. We are doing that while remaining the lowest per-capita tax burden in the country."

The bottom line of DeSantis’ proposal would be about $2 billion less than the current year’s budget, according to the governor’s office. The current year budget, which took effect in July, became the state’s first $100 billion budget, at least in part because of a huge influx of federal money tied to the coronavirus pandemic.

DeSantis’ proposal would continue to use such federal money to fund key issues, such as a plan to eliminate state gas taxes for five months starting in July. Federal money would make up for about $1 billion in lost gas-tax revenue that ordinarily goes to transportation projects.

The governor in recent weeks trickled out some details of the budget, spurring Democrats to argue that the spending plan should be more "people-centered."

"The state’s budget should prioritize the everyday challenges facing the people across our state and reflect a commitment to the important partnership between the state and federal government that is needed for Florida and Floridians to thrive, not more double talk from the governor that only serves his political aspirations," Agriculture Commissioner Nikki Fried, a Democratic candidate for governor, said in a prepared statement Thursday after DeSantis released the proposal.

--- Spending $600 million to continue efforts to raise salaries of public-school teachers, an increase of $50 million over the current year. The plan also would provide $238 million for $1,000 "retention" bonuses for teachers and principals.

--- No tuition increases for state college or university students.

--- Spending $980 million on Everglades restoration and other water projects. That amount includes $660 million related to the Everglades, with other money going to addressing issues such as blue-green algae, red tide and natural springs.

--- Spending $124.2 million to increase base pay for correctional officers, as the prison system grapples with massive turnover. DeSantis also wants to give pay raises to law-enforcement officers at other agencies and provide $1,000 bonuses to police officers, firefighters, paramedics and emergency-medical technicians throughout the state.

--- Spending $226.5 million to increase Medicaid payment rates for health- and human-services providers such as nursing homes as a way to address staffing problems. The budget also would provide $100 million for cancer care and research, an increase of $37 million from the current year.

--- Providing $225 million for pay increases for state employees, in addition to the increases sought for correctional officers and law-enforcement officers.

--- Eliminating state gas taxes for a five-month period and holding a series of sales-tax "holidays." That includes a 10-day period in which back-to-school shoppers could avoid paying sales taxes on clothes, school supplies and personal computers.