Minutes before Gov. Ron DeSantis' press conference was scheduled to start, police handcuffed a protester for trespassing at the Florida Department of Health in Jacksonville.

JACKSONVILLE, Fla. - The president of a Florida civil rights group was handcuffed Tuesday morning after refusing to leave the building where a Governor Ron DeSantis press conference was supposed to occur.

DeSantis was scheduled to hold a COVID-19 press conference at 10:15 a.m. at the Florida Department of Health in Jacksonville. However, a handful of people were inside the room who were without press credentials, including Ben Frazier, the founder and president of Northside Coalition of Jacksonville.  The group is described as a group "focuses on the problems of social, racial, and economic injustice," according to its website.

Early on, Frazier was heard telling staff that those who were not members of the press were present to hold the governor accountable, saying he wanted to speak to the governor about his response to the pandemic, adding that the public had the right to be there when a public official was present.

"It's time for him to address the people…there's nothing private about public health," Frazier said, and also called the governor the "enemy of the public." 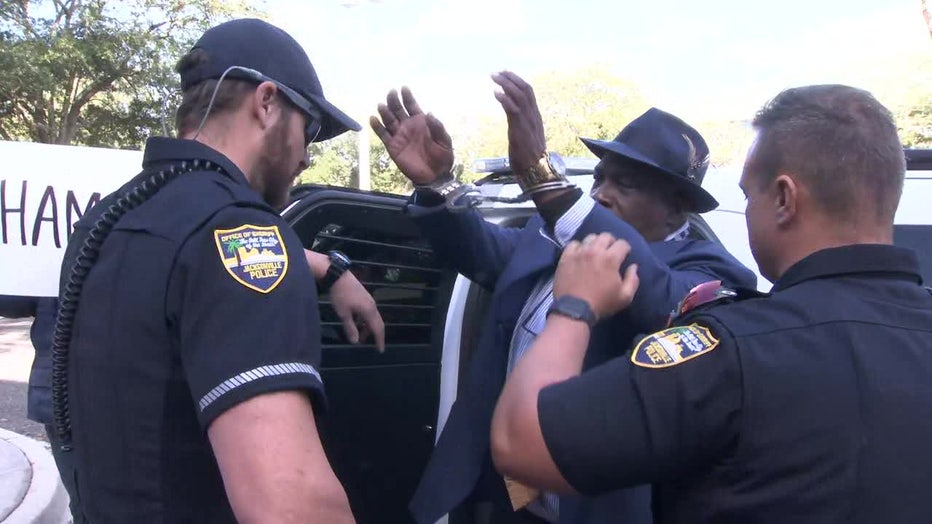 One aide continued to ask Frazier to leave, but the community activist replied, "You're trying to stop the people from gathering on public property…Go get the governor."

A woman who did not have a press credential was heard saying DeSantis was "missing in action" last week during the omicron surge. A DeSantis spokesperson previously said the governor accompanied wife Casey to cancer treatment Dec. 29, the day several accused the governor of "missing."

Another man identified himself as a member of Take Em Down in Jacksonville, a group focused on removing "all monuments dedicated to white supremacy," according to their Facebook group.

"I want to talk to the governor about his policy regarding the pandemic, regarding critical race theory…regarding all of his policies that are negatively affecting the community," he told another governor aide, who offered business cards to the individuals.

A man who described himself as the facilities' manager said the room is usually locked, and an appointment was scheduled for the press conference. He was heard telling Frazier and others that he could have them trespassed. That's when law enforcement arrived.

"The governor is afraid to meet with the people," Frazier said as an officer handcuffed him. "When it comes to public welfare, this governor does not care."

"Shame! Shame! Shame!" people were heard saying outside as Frazier was placed inside the back of a Jacksonville Sheriff's Office patrol car.

The press conference was eventually held -- but in a different room. DeSantis opened with no comment on the protest.

In a statement to WOKV, a spokesperson for the governor said, "Every citizen has the right to protest in public places but not to disrupt press events that are being held in secured facilities."

Agriculture Commissioner Nikki Fried, who is challenging DeSantis for his office this year, said she was "deeply disturbed by the arrest" and referenced HB1, Florida's new ‘anti-riot’ law that was recently deemed unconstitutional.

"The extremely disturbing events we saw take place today, arresting an individual for simply asking to speak with the Governor at a press conference held on government property discussing public health policy, were a realization of our fears surrounding HB1’s enactment," Fried wrote. "HB1 set a dangerous precedent, disallowing individuals from speaking their minds and peacefully gathering – freedoms guaranteed by the First Amendment. I hope that any charges brought against Mr. Frazier, a respected civil rights activist in the community, are swiftly dropped and apologies issued for infringing on his rights. The Governor should be ashamed."

Past news reports in Jacksonville show that Frazier has been involved in previous lawsuits against the state, including the "anti-riot" law that a federal judge ruled unconstitutional in September 2021.

Marcia Grace said she didn't come with Frazier and wanted to ask DeSantis questions, such as how he will handle the demand for COVID-19 testing. She said she was not there to make disruption and was seated in the back of the room. She said it was disappointing it turned into a show of force.

"I think they were making an example out of him," she said.

It's unclear if Frazier is facing charges.