KISSIMMEE, Fla. - Florida doctors soon will be barred from performing abortions after 15 weeks of pregnancy, as Gov. Ron DeSantis on Thursday signed a measure that closely resembles a Mississippi law under review by the U.S. Supreme Court.

The Republican-controlled Legislature passed the bill (HB 5) along almost straight party lines after tense and hours-long debates during this year’s legislative session. Opponents quickly threatened Thursday to challenge the measure in court.

The law, which will take effect July 1, bans most abortions past the 15-week mark. An exception would be allowed for instances of a "fatal fetal abnormality." The law defines such abnormalities as "a terminal condition that, in reasonable medical judgment, regardless of the provision of life-saving medical treatment, is incompatible" with life outside the womb.

The U.S. Supreme Court heard arguments in December about the Mississippi law, a case that could lead to the court’s conservative majority scaling back or overturning the landmark Roe v. Wade abortion decision.

The bill closely mirrors a Mississippi 15-week abortion law that is currently being debated by the Supreme Court as a challenge to the 1973 Roe v. Wade decision.

Florida Sen. Kelli Stargel, a Lakeland Republican who sponsored the 15-week limit in the Senate, took aim at Roe v. Wade during the bill-signing event in Kissimmee. Roe v. Wade generally has allowed women to have abortions until about 24 weeks of pregnancy.

"When I ran for office this was something I never dreamed, that we’d be to a day where … we’re looking to the potential of Roe v. Wade being overturned," Stargel said, eliciting loud applause from the crowd. "And that we’re protecting the life of every single baby past 15 weeks of gestation."

"The reality of the Roe decision is that men on the Supreme Court proclaimed that women, in order to achieve equality with men, must be able to kill their own children. As a woman, I refuse to accept such a perverse version of equality," Grall said.

Meanwhile, Democrats and abortion-rights groups said the bill is unconstitutional and an affront to women’s rights.

"Not only is this unconstitutional and infringes on personal freedom, it also isn’t our place as elected officials to mandate choices women must make about their health," House Minority Leader Evan Jenne, D-Dania Beach, said. 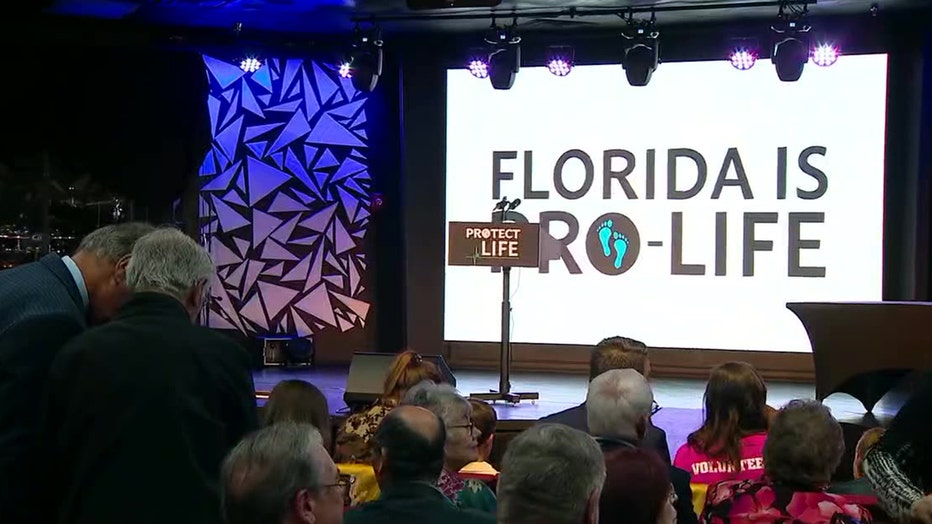 The backdrop of the stage inside the Florida church, Nacion de Fe, before Gov. Ron DeSantis signed the 15-week abortion bill into law. (FOX 13 / File)

Alexandra Mandado, president of Planned Parenthood of South, East and North Florida, said the organization is "exploring every option to stop this unconstitutional ban from being implemented."

The American Civil Liberties Union was more direct in its warning to Florida leaders.

"We'll see Florida in court," a tweet from the organization said, in part.

Critics also slammed the Legislature for rejecting proposed changes to the bill that would have added an exception to the 15-week abortion limit for victims of rape or incest.

"This abortion ban has total disregard for victims of rape, incest, and human trafficking who may need more time to physically and psychologically heal, arrive at a decision and receive care," Senate Minority Leader Lauren Book, D-Plantation, said in a statement.

In order for an abortion to be performed past the 15-week mark, two physicians would be required to certify that a "fatal fetal abnormality" exists under the law. Democrats criticized that requirement as "onerous" and argued it could put an undue burden particularly on Floridians living in rural areas.

"Obviously you don’t have two OB-GYNs in your rolodex. You’re not a patient of two of them. So, by definition of this bill, you have to find a new doctor," said Sen. Tina Polsky D-Boca Raton, adding that the wait for an appointment with a new physician can take weeks.

After a 7-year battle, Florida will soon be able to enforce a 24-hour waiting period for abortions. A Leon County judge ruled the law passed in 2015 requiring the waiting period is constitutional. Abortion rights advocates sued the state, claiming the law violates a woman's privacy.

DeSantis’ signing of the bill also drew criticism from Democrats who are running for governor.

U.S. Rep. Charlie Crist criticized the signing as representing a "solemn, dark day for women’s rights" in Florida. Agriculture Commissioner Nikki Fried, another Democrat vying to become governor, denounced the law as a "despicable and disgusting assault on women."

But organizations such as Catholic Bishops of Florida rallied around DeSantis. The Catholic Bishops group praised the law as "significant progress towards full legal recognition of unborn children."

Florida in recent years has ramped up restrictions on abortions. For example, lawmakers passed a requirement that minors get consent from their parents before having abortions.

On Friday, a Leon County circuit judge upheld the constitutionality of a 2015 law that requires a 24-hour waiting period for abortions in the state.

Abortion advocates and pro-life supporters took to the streets of St. Pete Saturday to mark the 49th anniversary of Roe v. Wade.

The state Agency for Health Care Administration in early January posted statistics about abortions in 2021 in Florida:

— 0: Abortions in the third trimester.

—111: Reported abortions due to rape.

— 8: Reported abortions due to incest.

— 13,467: Abortions reported for residents of Miami-Dade County, the most in the state.

— 10,184: Abortions reported for residents of Broward County, the second-highest total.

— 3: Counties (Glades, Lafayette and Liberty) in which fewer than 20 residents had reported abortions.