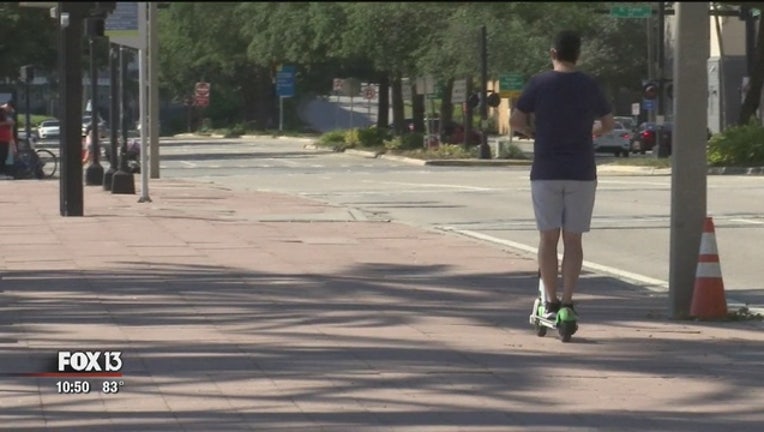 TALLAHASSEE, Fla. (FOX 13) - Florida Governor Ron DeSantis signed a bill into law Tuesday expanding individual cities' authority to regulate electric scooters. Most notably, the bill lifts a restriction that limited the use of e-scooters to sidewalks.

Effective immediately, riders in downtown Tampa can now ride e-scooters on streets and in bike lanes. Four separate companies have rolled out electronic scooters in recent weeks during the city's pilot program -- which launched in late May -- prompting concerns from some over safety.

"Some of the issues we're seeing are people riding in the middle of the streets, they're supposed to only be on the sidewalks right now. We see people that are going very quickly by pedestrians without any warning," Duncan said.

However, under the new legislation, e-scooter riders have "all rights & duties applicable to the rider of a bicycle," including the use of streets and bike lanes.

While Duncan could not immediately be reached for comment following news of the law's passing, City of Tampa public affairs director Ashley Bauman said the city welcomes "any legislation that makes our streets safer, for not only scooter riders but also pedestrians and drivers."

As of Thursday morning, at least one of the e-scooter companies, Lime, continued asking its app users to 'please only ride on the sidewalks in Tampa.' The company also warned riders against taking electric scooters onto streets or sidewalks on Bayshore Boulevard, 7th Avenue or the Tampa Riverwalk.

In early June, Clearwater officials passed a six-month ban on the motorized scooters in order to come up with a plan on regulating them.