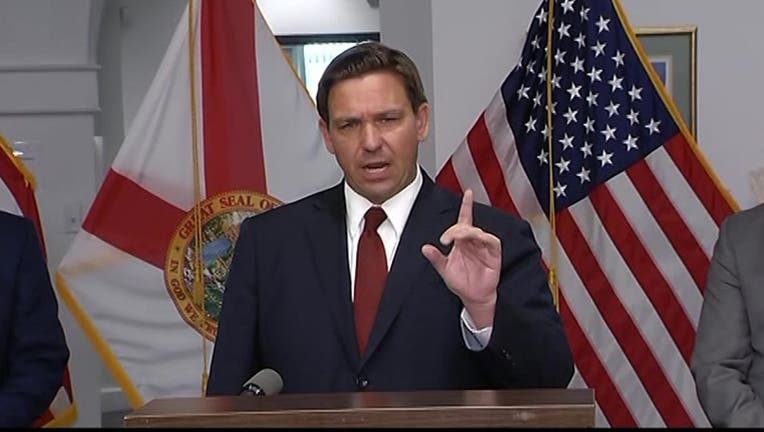 TALLAHASSEE, Fla. - Florida Gov. Ron DeSantis made it clear in his State of the State speech Tuesday that he likes teachers, first responders and freedom and he doesn't like Dr. Anthony Fauci, critical race theory, abortion, illegal immigration and Burmese pythons.

DeSantis opened his speech with a subject he has hammered over and over again during the pandemic: Florida won't be a lockdown state and mandates that other states imposed to fight the coronavirus don't work.

"Florida has become the escape hatch for those chafing under authoritarian, arbitrary and seemingly never-ending mandates and restrictions," DeSantis said. "These unprecedented policies have been as ineffective as they have been destructive. They are grounded more in blind adherence to Faucian declarations than they are in the constitutional traditions."

DeSantis referred to Florida being a free state 10 times during the 33-minute speech, often interrupted by applause from Republican lawmakers as the Legislature opened its annual 60-day session.

The governor said his policies have made Florida a leader in job growth and that rising state revenue puts the state in a good position as it prepares the next budget.

"Freedom works," DeSantis said. "Our economy is the envy of the nation. And our state is well-prepared to guard against future economic turmoil."

DeSantis, who is up for reelection in November and is eyeing a possible 2024 presidential run, laid out a conservative agenda for 2022, including keeping undocumented immigrants out of Florida, creating a law enforcement office solely dedicated to fighting election fraud, stopping schools from teaching critical race theory and protecting the unborn.

"We cannot be a party to what is effectively a massive human smuggling operation run by the federal government. Companies who are facilitating the movement of illegal aliens from the southern border to Florida should be held accountable," DeSantis said.

He said he'll ask the Legislature for money to send undocumented immigrants to other states.

"When the feds dump people here in Florida illegally, the state can re-route them to states that have sanctuary policies," he said.

DeSantis also said he wants $1,000 bonuses for teachers and first responders and to save drivers $1 billion with a gas tax holiday.

As DeSantis made his way across the House floor to deliver the speech, he shook the hands of Florida's two independently elected Republican Cabinet members, but snubbed Democratic Agriculture Commissioner Nikki Fried, who was seated next to Attorney General Ashley Moody and Chief Financial Officer Jimmy Patronis.

"As he walked in, there was no decorum in the recognition," said Fried, who is seeking the Democratic nomination to challenge DeSantis.

Fried said DeSantis' speech was more of an appeal to a national audience than it was an outline of goals for the state.

"Half of his speech was talking about immigration, talking about what's happening in Washington, D.C., and there was less focus on the concerns and the issues that are happening every single day in (Florida) families," she said.

Also seeking the Democratic nomination for governor are state Sen. Annette Taddeo and U.S. Rep. Charlie Crist. But DeSantis has paid little attention to them.

During the speech, DeSantis took time to recognize a man he called the python king, Charlie Dachton, who caught 41 pythons in the Everglades as part of the state's annual roundup of the invasive reptile.

"We resolved to leave our unique natural inheritance to God better than we found it, and we are fulfilling that pledge," DeSantis said.