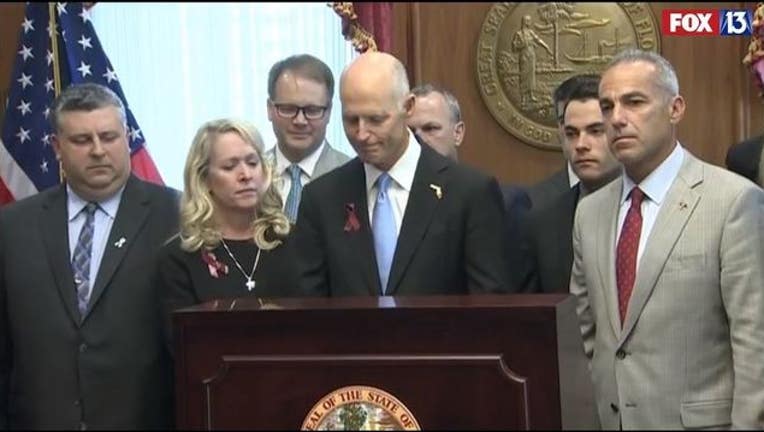 TALLAHASSEE (NSF) - Gov. Rick Scott met Friday with the families of victims of last month’s mass shooting at Marjory Stoneman Douglas High School, raising expectations that he would sign into law a sweeping school-safety measure that sparked veto requests from critics on both ends of the gun-control spectrum.

After the meeting, surrounded by those families, Scott signed the bill (SB 7026) into law.

The bill raises the minimum age from 18 to 21 and requires a three-day waiting period for people purchasing rifles and other long guns, requirements that already apply to buying handguns. The measure also bans the sale of “bump stocks,” which allow semi-automatic rifles to mimic fully automatic weapons.

The new gun restrictions have infuriated the powerful National Rifle Association, in a state the gun-rights organization has used for years as a testing ground for model legislation.

Meanwhile, teachers, parents, black lawmakers and other critics are blasting the bill for a controversial provision that would allow specially trained school personnel, including teachers, to bring guns to schools. Teachers who “exclusively” perform classroom instruction would be excluded from the program, meaning teachers who have other duties, such as drama coaches, would be eligible to participate.

The Florida Education Association on Thursday asked Scott to veto the measure, saying more than 200,000 school employees could qualify to carry firearms, which would “do more harm than good.”

“Our teachers and other school employees are ready to fiercely defend our students but none of them should ever have to choose between shepherding students to safety or confronting an armed assailant where they are sure to draw fire towards the very students they are trying to protect,” Joanne McCall, president of the teachers’ union, wrote in a letter to the governor.

NRA Florida lobbyist Marion Hammer on Thursday also sent out an “emergency alert” to supporters, urging them to contact Scott and demand a veto.

Hammer, a former national president of the gun-rights group, accused House leaders of forcing Republicans to support the measure, which the House passed Wednesday in a 67-50 vote. Just 19 of the chamber’s 77 Republican members opposed the bill, following what Hammer called “one of the most despicable displays of bullying and coercion.”

The proposal “violates Second Amendment rights and punishes law-(abiding) citizens for the actions of a mentally ill teenager who murdered 17 people after Florida officials repeatedly refused to get him the help he needed,” Hammer wrote, referring to 19-year-old Nikolas Cruz, who is charged with murdering 17 people at Marjory Stoneman Douglas.

The $400 million school-safety package includes money for early mental-health screening and services, school resource officers, school-hardening grants, and $25 million to raze and rebuild the freshman building where the shooting spree occurred. The bill also includes a commission that will investigate the events leading up to and response to the attack by Cruz, who had a lengthy history of mental-health problems. The commission will also make recommendations.

Scott has repeatedly said that he objects to the three-day waiting period in the legislation and opposes “arming teachers,” but would not say whether he intends to sign the bill into law.

But the governor telegraphed what action he might take on the measure, which the 17 families said they support and asked him to sign.

Immediately following the nation’s second-worst school shooting, students, parents and teachers from the Parkland school flooded the Capitol, pleading with the Scott and the Legislature to act. Many Douglas High student survivors demanded a ban on assault-style weapons, along with a hike in the age to purchase rifles.

Lawmakers on both sides of the aisle have been inundated by emails and phone calls from opponents and supporters of the measure, which does not include an assault-weapons ban.

Two fathers whose daughters were among the 14 students slain on Valentine’s Day watched from the House gallery as the chamber debated the measure Wednesday.

The Parkland parents and students were instrumental in the passage of Florida’s first gun restrictions in nearly two decades, said Rep. Jared Moskowitz, a Coral Springs Democrat who graduated from Douglas High and served on the Parkland city commission.

“These parents, unfortunately, should not have had to do this. It should have been obvious that we needed to do something after Parkland. We should not have needed an additional push from these parents. These parents should be grieving, not lobbying for us to do the right things. There’s no question that they were the difference makers,” Moskowitz said.

In contrast to previous school shootings, such as the massacre at Connecticut’s Sandy Hook Elementary School in 2012, when the Republican-controlled Florida Legislature was unwilling to irk the NRA, state lawmakers quickly passed this year’s measure for two reasons, according to Moskowitz.