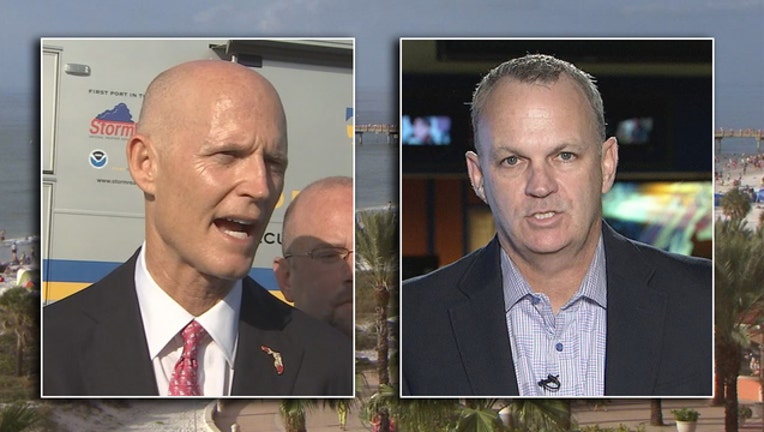 TAMPA (FOX 13) - Gov. Rick Scott came out in his most forceful terms yet against the plan by Florida's House Speaker Richard Corcoran (R-Lutz) to do away with Florida's tourism and business incentive programs.

Speaker Corcoran says Visit Florida and Enterprise Florida, which promote the state to potential tourists and businesses, don't live up to the state's expectations in terms of budgetary dollars.

Gov. Scott disagrees. After his cabinet meeting Tuesday, he told reporters he did not appreciate the speaker's input.

"This is so frustrating because I don't understand how anybody can sit there and say I don't care about a person getting a job," said the governor. "These are individuals who have never been in business, and they want to lecture me."

Gov. Scott said he sees the plan to do away with Visit Florida and Enterprise Florida as a political move, not an effort to do the best thing for the state.

"What we are seeing is, are people who just want to run for higher office and not concerned about what happens to other people," said Scott. "They just think it is a nice sound bite."

Scott argues the number of tourists visiting the state went from 80 million six years ago to a record 110 million this year. He says job growth is double the national average. He's requesting $85 million for Enterprise Florida and $76 million for Visit Florida in the new budget.

"If we think we shouldn't keep marketing our state then some people are going to lose their job," said Scott.

But Speaker Corcoran fired back. He put out a chart showing Visit Florida's budget doesn't correlate with tourism growth, adding only 10 percent of Enterprise Florida's projects met all of its requirements since 1994.

"Why is government in the free market space, competing against businesses and picking winners or losers? That's de facto socialism," Corcoran said on FOX 13's program, Money Power and Politics.

Corcoran's plans have been met coldly in the Senate, so it's unclear where negotiations will wind up. Scott, meanwhile, is digging in.

"It is shocking to me anybody could ever think that way," he said. "Has [the state] gotten more jobs? Yes. Has Visit Florida worked? It sure as heck has."