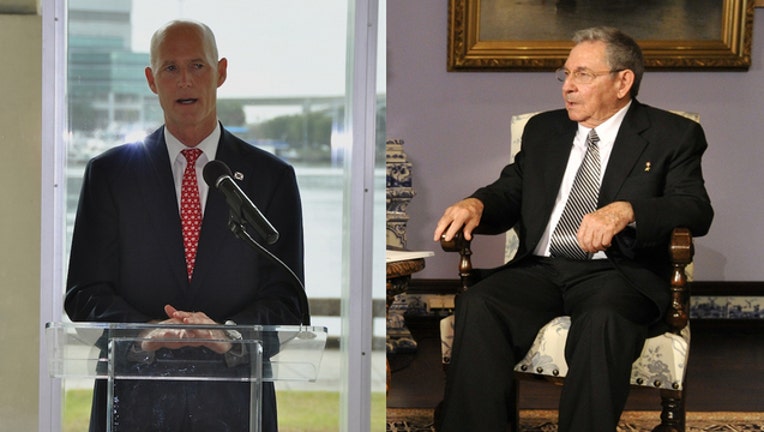 In the correspondence, Governor Scott tells Cuba's new leader, "You have a tremendous and historic opportunity right in front of you.  You can take Cuba in one of two directions."

Scott called Castro out for continuing his brother's tyranny, bringing up specific examples of people the younger Castro imprisoned in the wake of his brother's death.

The Florida governor appealed to religion, recalling that after Pope Francis' visit, Castro suggested he might return to church and begin to pray again.

Governor Scott ended the letter with a moment of self-reflection and hope, stating, "People will mock this letter and call it naïve.  But, for the sake of the Cuban people, I pray change will come."

Read the letter in its entirety, in English, below:

As you know, following the death of your brother Fidel, the streets of Miami were packed with people celebrating.  The celebration represented the hope for an end to the decades of torture, repression, incarceration and death that you and your brother have caused the people of Cuba.

While many are hopeful for the future of Cuba, it is thus far clear that nothing has changed.  Let me be specific with a few examples: You recently imprisoned the artist El Sexto for expressing his views following the announcement of your brother's death.   It is reported that he is in isolation without food or clothing.  Dr. Eduardo Cardet, the National Coordinator for the "Movimiento Cristiano Liberación" (MCL) was imprisoned.  And, just a few days ago Berta Soler, the leader of the Ladies in White, was detained.

Like your brother, you are known for firing squads and imprisonment of those who oppose you.  You have said that you plan on retiring in 2018, but the leadership that you have picked to come after you is designed to keep your oppression intact, and to keep your people trapped.

After Pope Francis' trip to Cuba, you suggested that you may return to the church and pray again.

My prayer for you and the Cuban people is that you listen to Pope Francis and focus on bringing absolute freedom and democracy to Cuba.  I pray that you open Cuba to freedom of the press and religion; release all political prisoners; provide unfettered access to the internet; allow ownership of land; provide reparations to those whose property was confiscated; bring all Cuban military home and allow for free and fair elections with international supervision.

You have a tremendous and historic opportunity right in front of you.  You can take Cuba in one of two directions.

You can allow a new era of freedom and opportunity for Cuba.  This path will almost overnight provide all Cubans with a dramatic improvement in their quality of life at every level.  The people of Florida and of the entire United States are ready to help make your country an overnight success with unprecedented levels of trade and capital investment.  Every human heart longs for freedom, and your people long for freedom.

Or, you can continue on the other path.  This path is best characterized by oppression, tyranny, wrongful imprisonment, torture, and murder.  This is the path that hates freedom, the path that does not trust every man and woman to make their own decisions, the path that opposes all those who honor and worship God.

And this is also the path of poverty, the path where the tyrants live like kings while the people live like peasants. But, right in front of you is the opportunity to embrace freedom and bring in a new era of unprecedented prosperity for your people.   I have no doubt that the people of Florida stand ready to flood Cuba with prosperity.

No one thinks you will choose the way of freedom, the way of democracy, the way of peace.  People will mock this letter and call it naïve.  But, for the sake of the Cuban people, I pray change will come.