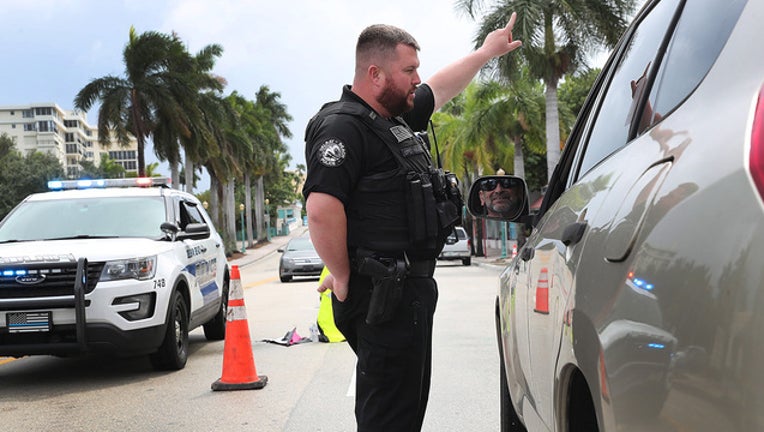 Delray Beach police officer Matt Warne informs a driver that the road to the beach is only open to residents as Hurricane Dorian continues to make its way toward the Florida coast. (Photo by Joe Raedle/Getty Images)

TALLAHASSEE, Fla. (NSF) - Florida officials said Monday that 72 nursing homes and assisted living facilities and seven hospitals on the state’s East Coast had been evacuated in preparation for Hurricane Dorian.

Agency for Health Care Administration Secretary Mary Mayhew told reporters that only four of the long-term care facilities were evacuated because they didn’t have emergency generators and access to backup power as required by law.

“They are making a determination based upon their buildings’ ability to withstand a Category 5 (hurricane), whether they are in the surge zone. So that is separate and apart from the generator,” Mayhew said.

Nevertheless, mandatory evacuations have been ordered along many parts of the coast, as officials warn of storm surge, damaging winds and power outages.

Evacuating the nursing homes and assisted living facilities means that residents must be transferred to different locations. Mayhew didn’t directly answer whether any nursing home and ALF residents were being transferred to emergency shelters or special-needs shelters.

She said those decisions were not being made in Tallahassee.

“All of this is local. All of the coordination and the decision-making around evacuations are local,” she said. “Patient safety, our requirements, our expectations around patient safety, remain intact.”

Florida has 84,078 nursing home beds, with more than half --- 46,255 beds --- in facilities that have requested, and been granted, additional time to meet the backup power mandate.