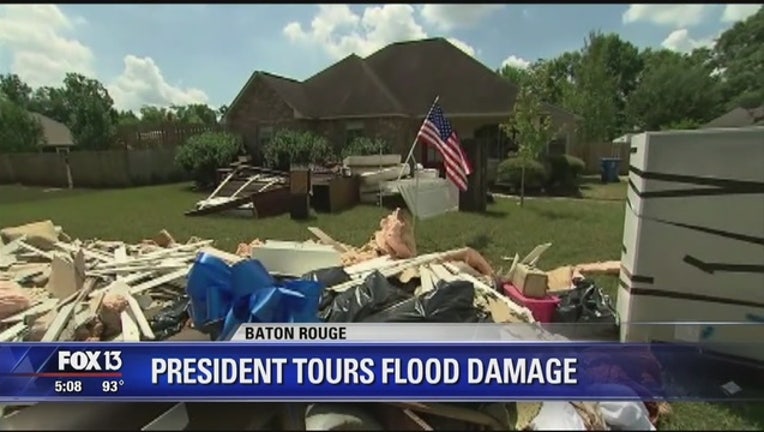 BATON ROUGE, La. (FOX 13) - For information on how to help flood victims in Louisiana, visit http://volunteerlouisiana.gov/

President Obama visited parts of Louisiana devastated by flooding. He met with victims and called on Americans to "stay focused” on the tremendous need for help.

The president took some heat for waiting until Tuesday to make this trip; 10 days after historic flooding that damaged or destroyed tens of thousands of homes.

He was met Tuesday morning at the Baton Rouge airport by Govenor John Bel Edwards, a democrat who said he asked the president to hold off on visiting until the initial disaster response was over.

Last week, the president chose not to cut short his vacation to Martha’s Vineyard. He told reporters Tuesday, he is not too concerned about the politics that critics are playing and he was confident in his administration's response.

Meanwhile, FEMA has been on the ground in southern Louisiana for more than a week.

The president toured a neighborhood in east Baton Rouge Parish, where an estimated 70-percent of homes are damaged by flooding from a series of storms that brought record rainfall. At least 13 people have died in the flooding.

All total, more than 60,000 homes in southern Louisiana were damaged or destroyed.

Going door-to-door Tuesday, the president offered sympathy to residents and promised more help is on the way.