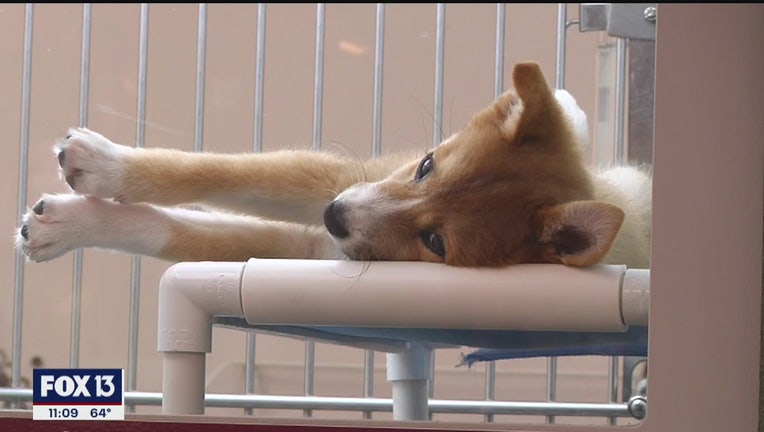 TAMPA, Fla. - It’s now been four months since more than 300 dogs were rescued from a Tampa breeding facility. Since then, county commissioners said they want to crack down on stores that sell pets, but some businesses say they’re being unfairly targeted.

"I respectfully encourage you to completely ban the retail sales of puppies and kittens," a resident said during the public comment section of Thursday's Hillsborough County Commission meeting.

One by one, residents pleaded their case to commissioners, asking they put a stop to puppy sales.

"Removing the grandfather clause is a right thing to do," another resident said.

The clause is part of a 2017 ordinance prohibiting new puppy stores from opening while allowing Tampa's two remaining puppy stores to continue operating, but Thursday commissioners accepted recommendations to remove the grandfather clause.

"There's no way that my clients can comport with the restrictions of this ordinance and stay in operation," attorney Luke Lirot said.

Lirot represents both stores: All About Puppies and Puppies Tampa.

As part of the restrictions, both stores would have six months to convert into strictly rescued-based sales, but Lirot says it would put his clients out of business.

"The options they are trying to propose are just not workable. You can't force everyone in the world to get a rescue puppy," Lirot said.

But some residents disagree.

In September 2019, hundreds of dogs were rescued from cramped cages inside a Tampa breeding facility, prompting county commissioners to take action.

"For two years, this county has turned itself inside out to accommodate the greed of two store owners," one resident said.

County commissioners voted to accept the recommendations. They'll have another public hearing at their next meeting and plan to hold an official vote on the ordinance on February 19.