TAMPA, Fla. - After more than three hours of presentations, public comment, and debate, Hillsborough’s emergency planners narrowly voted to make face-coverings mandatory at all businesses in the county.

The Emergency Policy Group’s order, which takes effect at 5 p.m. Wednesday, brings the county closer in line with the city of Tampa, where Mayor Jane Castor issued her own order requiring individuals to wear masks in most indoor public spaces late last week.

The county's new order says business operators must require customers and employees to wear face coverings inside, but does not apply to churches or non-profits. Schools are also omitted, at least until the superintendent issues his plan.

It applies to everyone over the age of 2, but provides exceptions for those impaired by pre-existing health conditions.

At the request of Temple Terrace vice mayor Andy Ross, the order was modified to target business operators rather than individuals, meaning individuals cannot be charged or cited for not wearing a mask. It’s punishable by a second-degree misdemeanor against non-complying businesses.

The order was opposed by the sheriff, who feared the impact on law enforcement. He instead proposed educational 'strike teams' to enter communities with low compliance.

“If the purpose of this measure is to educate and encourage citizens, why do we need a law to do that?” Chad Chronister asked.

“I think most business owners are going to do the right thing and comply,” Mayor Ross countered. 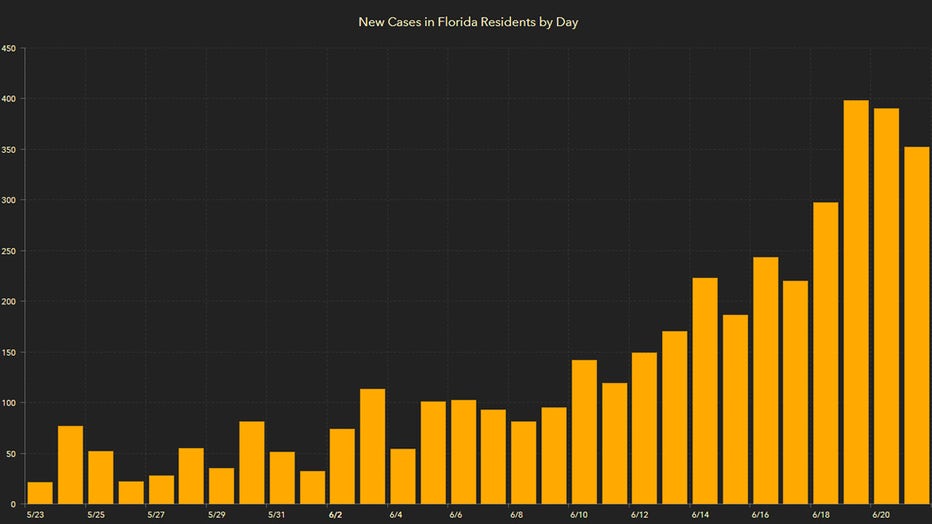 The lengthy debate came after a weekend where test data continued to yield new record-high numbers of positive cases for both the state and Hillsborough County. The county recorded around 400 new positive cases each of the last several days.

Presenting to the EPG, Dr. Doug Holt, the county’s health director, characterized the numbers as “quite a surge in community-based transmission.”

“We are not alone. We are seeing increases among our local county neighbors,” he warned.

Holt said contact tracing has uncovered increases in restaurant workers, in healthcare workers outside of their jobs, as well as those who play team sports -- specifically indoor hockey and volleyball players.

“We’re beginning to see very early signs of what could be a big increase in hospitalizations,” he warned.

The peak age group of patients is now between the ages of 15 to 40, and Lockwood said those young patients represent a “double threat” because they are asymptomatic and they are not social distancing.

He said the use of face-coverings makes you six times less likely to transmit the virus.

“If everybody wears a mask, we would have a big reduction in the occurrence of this infection,” he offered.

Earlier in the pandemic, the EPG declined to enact a mask policy. The vote Monday again followed contentious debate, with Chronister opposing the measure, along with Plant City Mayor Rick Lott and school board chair Melissa Snively.

“Masks are not the end-all,” Snively insisted, expressing concern about the load on small businesses as well as the effect on individuals who may have to reveal health conditions to explain why they are not wearing masks.

“I’m getting the same flood of calls for and against face coverings,” Commissioner Kimberly Overman said, acknowledging the polarizing nature of the topic. “But our numbers are increasing and we need to do what we can to stop the spread of this disease.”

“This is really a public health crisis,” agreed Commissioner Sandra Murman. “I have seen the emails and I do sympathize with them. But we have to worry about the health of our citizens. I think the data presented today was compelling.”

The order must be re-approved by the EPG every week.

Meanwhile, officials said high demand is causing technical issues and delays for residents trying to schedule COVID-19 tests but they encouraged residents to call and schedule tests while they improve the technology. An online reservation system could be online by Thursday.