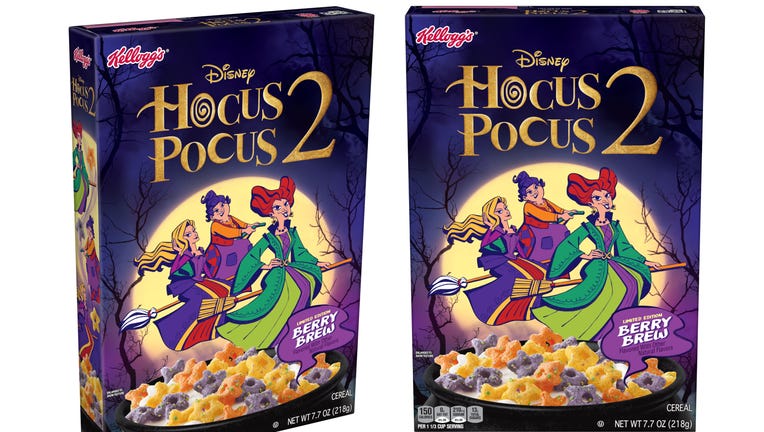 Kellogg’s debuted its new Disney Hocus Pocus 2 cereal, which will be available at grocery stores nationwide for a "limited time" starting in August. The new breakfast treat comes ahead of the film’s debut on Disney+ on Sept. 30.

"Hocus Pocus," the original 1993 comedy-fantasy film, is about three villainous witches from the 17th century who are accidentally resurrected by a teenage boy in Salem, Massachusetts. The first movie was not particularly successful in its original theatrical run, but has since found a cult following — particularly during the Halloween season.

In the sequel, Midler, Parker, and Najimy reprise their iconic roles as the evil Sanderson sisters, who return to present-day Salem and take on the teenagers who dared to evoke them.

"It’s been 29 years since someone lit the Black Flame Candle and resurrected the 17th-century sisters who were executed for practicing witchcraft, and they are looking for revenge," a synopsis for the new film reads. "Now it is up to three high-school students to figure out how to stop the ravenous witches from wreaking a new kind of havoc on Salem before midnight on All Hallow’s Eve."

The fan-favorite Halloween film is finally getting a follow-up movie.

"The delicious berry brew flavor of Kellogg’s Disney Hocus Pocus 2 cereal will enchant you," the company said in a statement about the "Hocus Pocus 2" cereal. "Each bite contains mixed berry flavors with purple, orange and yellow star-shaped pieces topped with green and purple flecks reminiscent of the Sanderson Sisters’ robes."

The first trailer for "Hocus Pocus 2" was released in June, showing two girls lighting the Black Flame Candle and summoning the witches.

"Lock up your children," Midler's character Winifred shouts in the trailer. "Yes, Salem, we're back!"

The witches are later pictured at what appears to be an outdoor Halloween carnival, where they're recognized.

"Hey, it's the Sanderson Sisters," he says. "I bet you're looking for the stage?"