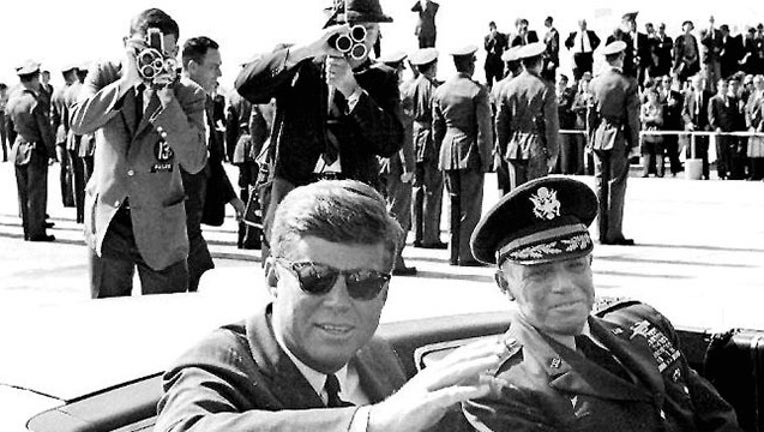 Tim Moran, left, films the president in Tampa for Channel 13.

TAMPA, Fla. - When I first saw Tony Zappone's wonderful collection of photographs of President Kennedy in Tampa, my eyes went from the president in his limousine to a man with an old film camera wearing a sport coat with "WTVT 13" on the pocket.

Had I been here then, that could have been me. But if I could find that early TV newsman, I'd ask him about his camera and his sport coat.

LIVING ON THE ISLAND

Fifty years after filming the president, Tim Moran is a retired lawyer. I found him at his home on Davis Islands.

"This is a Bell and Howell handheld 16-mm camera," he explained, expertly manipulating the buttons and latches to show me where the film was loaded.

In 1963, Moran was fresh from the University of Missouri and covering Kennedy was the biggest story he'd ever been assigned.

"This was the major story, as far as I was concerned, in the nation," he said.

As for the sport coat: "They bought us one jacket," he smiled. He lost it long ago, but vividly remembers that day.

I knocked on another door. As it opened, I saw and heard a guy who helped build the industry in which I work today.

"All hands on deck," he said, in a rich baritone voice that belied his 82 years.

All hands were on deck at all the local TV and radio stations and newspapers. Arch Deal was a news man for WTVT and WFLA, and later a radio traffic reporter for WRBQ 105.

On November 18, 1963 his assignment was covering the president. The streets were lined with people and reporters.

"The whole atmosphere was Camelot," he said. "I think a lot of people were fascinated by this young couple running the nation."

Deal said he was alone with the president for a few minutes at MacDill Air Force Base. "I found him to be the kind of guy you'd like to have a beer and a cigar with, just a real nice guy."

Technology for live on-the-scene reports wasn't available then. But Deal says the stations presented special reports on the evening of the Kennedy visit.

Sadly, 16mm film doesn't keep well and virtually all of the local news film from that day is gone. But it was still fresh on November 22, 1963 when they had to cover the news of the assassination in Dallas.

"And suddenly I saw that flash on the teletype," recalled Deal.

Walter Cronkite's famous report appeared on the screen. "Walter was choked up when he had that story," remembered Deal, "And I can imagine that."

Moran was sent on assignment with a shout: "You and Ray (Dantzler) go down to the courthouse!"

"I was stunned, just trying to keep working."

As Moran looked at the old camera, he remembered what a difference four days made on local TV -- from celebration to sorrow.

LAST IN A SERIES: President John F. Kennedy visited Tampa on November 18, 1963, just four days before he was assassinated in Dallas. Lloyd Sowers interviewed seven people with special stories of the Tampa visit and how they were affected when the tragic news came from Dallas.