TAMPA, Fla. - When the gorilla outside State Vacuum in Tampa wears "The GOAT's" number, it’s a big deal.

"I mean [Tom] Brady comes in and immediately changes it all," offered David Epstein. "We always have great players’ numbers on that one right there."

Epstein’s family has owned the store for 75 years. They’ve dressed their animatronic gorillas in sports jerseys for decades, and he’s seen generations of Buccaneers.

"Whether it be the Derrick Brooks of the world or the Tom Bradys, or the Leroy Selmons of the world," he continued.

That includes that first Bucs team in 1976. Epstein was there. 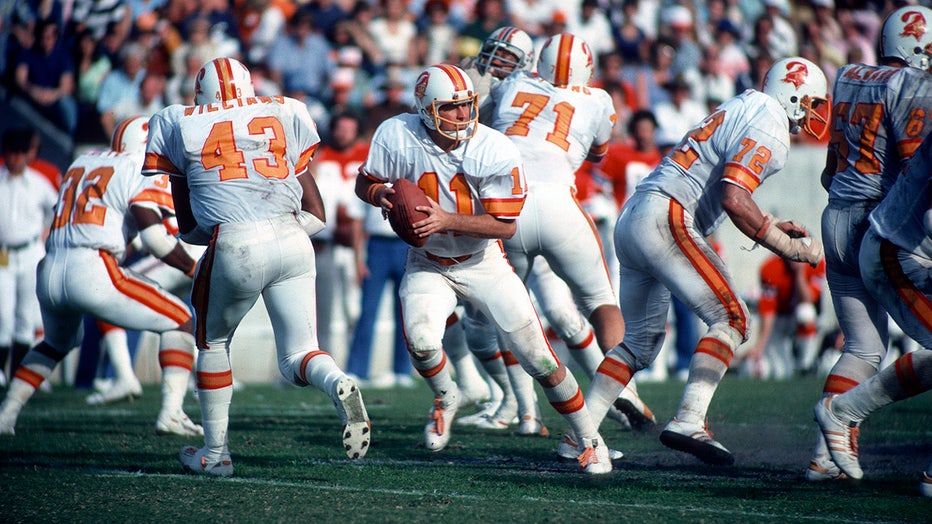 Steve Spurrier of the Tampa Bay Buccaneers drops back to pass against the New England Patriots during an NFL football game December 12, 1976 at Tampa Stadium in Tampa Bay, Florida. (Photo by Focus on Sport/Getty Images)

It was a team that, in those days, some thought was out of reach for the area.

"We were the absolute definition of a small market," offered Rodney Kite-Powell of the Tampa Bay History Center.  "We were even regionally, very small in those days."

The Year Round Play permanent exhibit at the history center chronicles the Bucs and the four previous Super Bowls Tampa has hosted. The first one was in 1984.

"There was only one limousine in town the very first Super Bowl," recalled Epstein. "They had to import them from Atlanta."

From fireworks and lasers to the NFL Fan Experience and beautiful weather, downtown Tampa was buzzing with pre Super Bowl energy Friday.

There was no such problem this time. Dozens of private jets landed at the airport, hundreds of lasers shined from the Jose Gasparilla pirate ship, and the eyes of the world were on Tampa.

This worst-to-first story has become part of the fabric of the Tampa Bay Area. In fact, Kite-Powell says, the effort to get the NFL to award the franchise helped lead to the name "Tampa Bay." It’s always been a body of water, but when local cities banded together to get the Bucs, the region itself became known nationally as Tampa Bay.

You have to go back a few years to remember this. It’s the Super Bowl halftime show from 30 years ago. You may even know some of the performers. Three decades later, it’s still remembered as a magical night.

Meanwile, if the "GOAT" sees the gorilla, Epstein hopes he will stop and take a picture.

"Yeah, we would love to have Tom Brady’s picture on the wall. And Gisele’s as well," he chuckled.