TAMPA, Fla. - A worker was attacked, beaten, and robbed after leaving International Plaza over the weekend. Now, Tampa police are searching for four men believed to be behind the crime.

Sunday afternoon, an employee at Burger Culture was leaving the restaurant at the mall, heading to another location. The man, who asked not to be identified, noticed a group was watching him.

"They were just looking at me, very different than a normal person would look at you," he said.

At times, he said they were following a little too close for comfort. When he exited Dillard's into the parking garage, "All I heard was, like, heavy footsteps behind me like someone's running behind me," he said, "and then I was grabbed."

Tampa police are searching for four men they say followed a victim outside the Dillard’s at International Plaza and beat and robbed them before fleeing in a dark-colored sedan.

"They just picked me up and started beating," the man said. "They were going for whatever I had on me. So, I just held onto my pockets, and I put on my body weight over everything in my pocket."

The group got their hands on his cell phone and money. Despite chasing them back through the mall, yelling to draw attention, they got away, driving off in a dark four-door sedan.

"Normal people don't do that," he said. "You don't just attack people as soon as they exit the mall in broad daylight."

The worker was left with a gash on his forehead and a swollen face from being kicked in the cheek.

"I couldn't really see out of my right eye because of how swollen it was," he said. 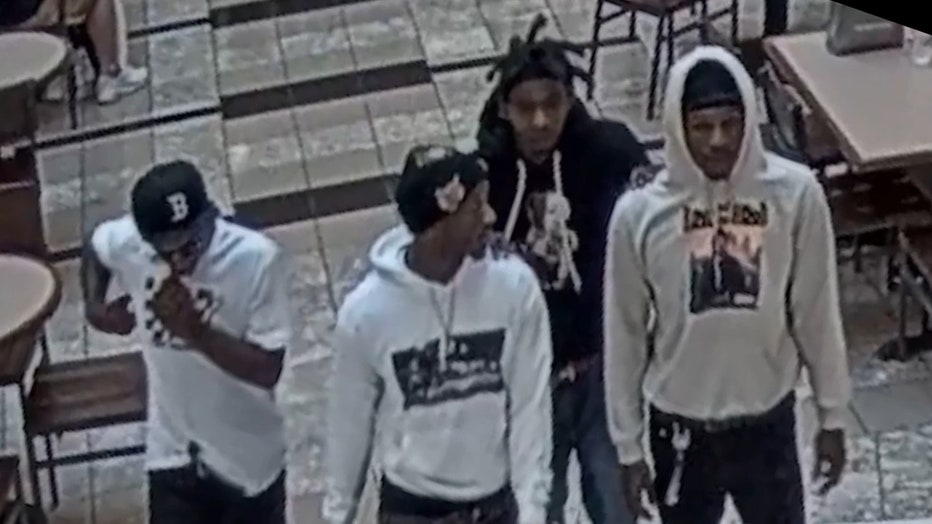 Provided by the Tampa Police Department

Looking back, he wishes he'd gone with his gut and alerted mall security at the first sign of trouble. He just hopes police catch up with the four men before anyone else gets hurt.

"Random things happen to good and bad people and you just have got to constantly be aware of your environment," he said. "I'm just thankful for my breath, and the fact that I'm breathing, and I guess that's the main thing. And my time, my freedom - that's what they didn't take from me."

If you have any information or can identify these men, you can provide anonymous tips to Crime Stoppers of Tampa Bay, Inc. or call 1-800-873-8477.