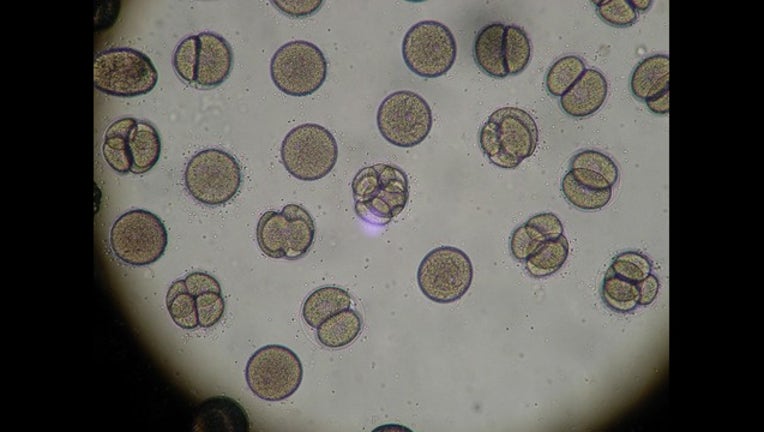 PORTLAND, OR (AP) - For the first time in the United States, scientists have edited the genes of human embryos, a controversial step toward someday helping babies avoid inherited diseases.

The experiment was just an exercise in science - the embryos were not allowed to develop for more than a few days and were never intended to be implanted into a womb, according to MIT Technology Review, which first reported the news.

Officials at Oregon Health & Science University confirmed Thursday that the work took place there and said results would be published in a journal soon. It is thought to be the first such work in the U.S.; previous experiments like this have been reported from China. How many embryos were created and edited in the experiments has not been revealed.

The Oregon scientists reportedly used a technique called CRISPR, which allows specific sections of DNA to be altered or replaced. It's like using a molecular scissors to cut and paste DNA, and is much more precise than some types of gene therapy that cannot ensure that desired changes will take place exactly where and as intended. With gene editing, these so-called "germline" changes are permanent and would be passed down to any offspring.

The approach holds great potential to avoid many genetic diseases, but has raised fears of "designer babies" if done for less lofty reasons, such as producing desirable traits.

"This is the kind of research that the report discussed," University of Wisconsin-Madison bioethicist R. Alta Charo said of the news of Oregon's work. She co-led the National Academies panel but was not commenting on its behalf Thursday.

"This was purely laboratory-based work that is incredibly valuable for helping us understand how one might make these germline changes in a way that is precise and safe. But it's only a first step," she said.

"We still have regulatory barriers in the United States to ever trying this to achieve a pregnancy. The public has plenty of time" to weigh in on whether that should occur, she said. "Any such experiment aimed at a pregnancy would need FDA approval, and the agency is currently not allowed to even consider such a request" because of limits set by Congress.

One prominent genetics expert, Dr. Eric Topol, director of the Scripps Translational Science Institute in La Jolla, California, said gene editing of embryos is "an unstoppable, inevitable science, and this is more proof it can be done."

Experiments are in the works now in the U.S. using gene-edited cells to try to treat people with various diseases, but "in order to really have a cure, you want to get this at the embryo stage," he said. "If it isn't done in this country, it will be done elsewhere."

There are other ways that some parents who know they carry a problem gene can avoid passing it to their children, he added. They can create embryos through in vitro fertilization, screen them in the lab and implant only ones free of the defect.

Dr. Robert C. Green, a medical geneticist at Harvard Medical School, said the prospect of editing embryos to avoid disease "is inevitable and exciting," and that "with proper controls in place, it's going to lead to huge advances in human health."

The need for it is clear, he added: "Our research has suggested that there are far more disease-associated mutations in the general public than was previously suspected."

Hank Greely, director of Stanford University's Center for Law and the Biosciences, called CRISPR "the most exciting thing I've seen in biology in the 25 years I've been watching it," with tremendous possibilities to aid human health.

"Everybody should calm down" because this is just one of many steps advancing the science, and there are regulatory safeguards already in place. "We've got time to do it carefully," he said.

Michael Watson, executive director of the American College of Medical Genetics and Genomics, said the college thinks that any work aimed at pregnancy is premature, but the lab work is a necessary first step.

"That's the only way we're going to learn" if it's safe or feasible, he said.

Marilynn Marchione can be followed at http://twitter.com/MMarchioneAP