It's called stellate ganglion block (SGB) and right now it's one of the only injectable medical procedures available to treat PTSD.

The treatment takes just minutes but doctors say it can offer a lifetime of relief.

Rosone is a veteran and PTSD survivor who served in a combat zone in Iraq for three and a half years. He worked as a human intelligence collector for the U.S. Air Force where he identified insurgent groups and interrogated terrorists.

"It was hard to go from a mission-focused job to no mission and for me the PTSD really settled in and started to become a problem for me when my life slowed down," Rosone said.

Rosone tried numerous treatments, from talk therapy to pharmaceutical drugs but nothing seemed to help. Then he heard about SGB.

The procedure involves injecting an anesthetic into the neck, specifically around the main nerve that controls the fight-or-flight response. For decades, it's been used to treat chronic pain, but now a small number of doctors across the country are using it to treat PTSD.

"Patients with PTSD who have mild to moderate symptoms seem to be responding really well to these treatments," anesthesiologist Dr. Arun Kalava said.

Dr. Kalava is an ABA board-certified anesthesiologist and for the last two years has been using SGB to treat PTSD survivors. 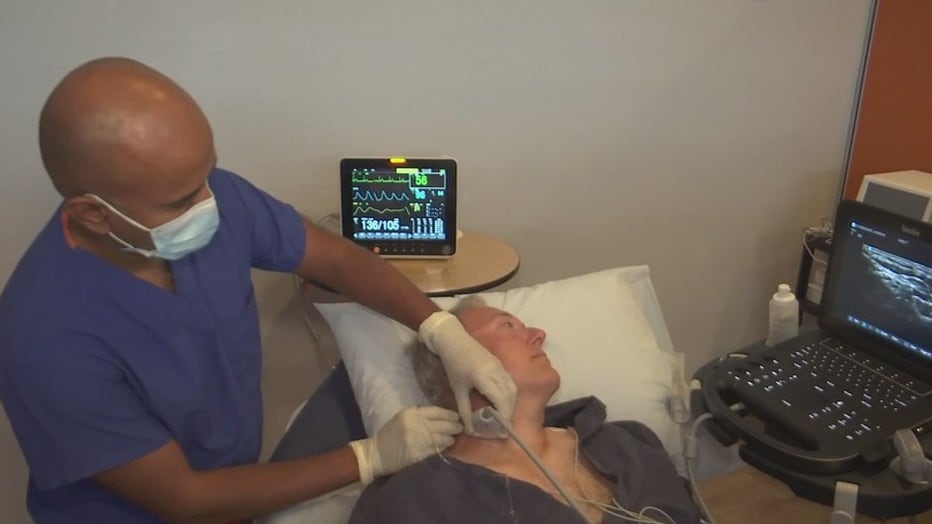 "There's not many treatment modalities available that people can use to get superior results," Dr. Kalava said.

It's the kind of results Rosone says he's never seen with any other treatment.

"It's like you have a lot of noise going on in your head and all around you and then suddenly everything becomes quiet," Rosone said.

The process begins with an ultrasound, giving Dr. Kalava real-time feedback on how to precisely position the needle. The anesthetic acts as a block, reducing nerve impulses and allowing the part of the brain that controls the fight-or-flight response to reset.

"With these nerve block, what we're trying to do is cut down the activity significantly where the symptoms are milder or very tolerable," Dr. Kalava said.

As Dr. Kalava explains, he never expected he would be treating veterans with PTSD.

"I'm just trying to serve the need to the best of my abilities because I have the skills already and I'm just using those skills to help a different subset of patients which I usually do not encounter in my practice," Kalava said.

For Rosone, his newfound relief is something he hopes others like him can soon find as well.