TAMPA, Fla. - As the nation recognized veterans for their service Thursday, some veterans said they also need more support when they leave the military.

"The homeless vets, the ones with PTSD – that should be at the top of the list right up there with the ones that have lost limbs," said Jerry Harden, a Vietnam War veteran in Clearwater.

The number of veterans experiencing homelessness went up in 2020 after declining in recent years. Army veteran Robby Groover, who works to help homeless vets find their purpose, said there aren’t enough resources to rehabilitate people. 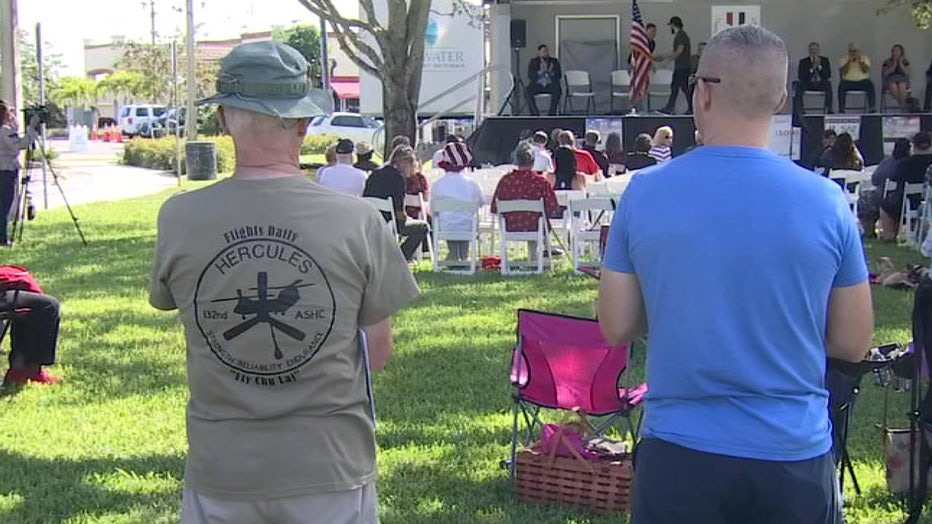 "We’re building the momentum towards helping the cause but even the big players let so many fall through the cracks. And that’s why it’s so important for community-based organizations like mine to really establish that," said Groover, president of the Veterans Alliance of Clearwater.

Thousands of veterans need help with mental health. A June study from Brown University’s Cost of War Project found that, since 9/11, service members and veterans died by suicide four times higher than those killed in combat.

"Suicide is something that’s plaguing our community. It’s these invisible wounds that people don’t really pay attention to," said Groover.

It's been over 60 years since Norma, a pharmacist in the 1940s, helped David during WWII at a Navy hospital in California. They went their separate ways, living separate lives: he was up in North, she stayed in California. After all this time, they ended up at the same Pasco County nursing home -- right down the hall from each other.

There’s a lot of unseen trauma and the Crisis Center of Tampa Bay has a veteran-staffed line that can help. Veterans can call 1-844-MYFLVET or 1-844-693-5838 or visit online at www.myflvet.com.

"Last year we had over 29,000 veterans call us either through our veterans support line or through 2-1-1, and they got connected to over 78,000 different resources," said Clara Reynolds, president and CEO of the Crisis Center.

Bill Hodges is an Air Force veteran with a professional speaking background. He uses a podcast to help other veterans maximize and understand the benefits due to them after going through his own claim with Veterans Affairs.

RELATED: Bay Area veteran turns to podcast to help other veterans across the globe

Stigma continues to be a strong barrier among veterans, so widening access for help is important. Reynolds shared where she sees gaps in community resources.

"There's a lot of veterans that don't want to access the VA [Veterans Affairs] for whatever reason, and we as the treatment community need to recognize that and be able to provide that level of treatment and support," said Reynolds. "I think that the other thing is that not all therapy is created equal. You know, we don't go to a general practitioner when we're having a cardiac event and when we think about therapeutic interventions, there's very specialized therapeutic interventions for trauma and for post-traumatic stress disorder. So I think it's really important for us to continue to talk about that."

Veterans said they hope for more caring hands and ears to listen and understand.

"We just need to stop, take a breath, and take care of the veterans," added Harden.