LAKELAND, Fla. - In north Lakeland, Wednesday’s tornado skipped down Gibson Shores Drive, hitting one house and missing the next.

Scott Leavitt was just getting home from work when the wind started to pick up. He rushed inside and it happened.

"Everything started shaking," he recalled. "My ears were popping like crazy."

Then part of the roof ripped off and he scrambled.

"It happened so fast," he continued. "I was trying to find a safe place, but what’s safe when the whole roof is going away?"

Storms that tore through Pinellas County continued to wreak havoc all the way into northern Lakeland Wednesday night.

It was a day of heavy lifting and clean up for others on his street as well, along with coming to grips with what happened.

"We lost a shed in the backyard -- a lean-to. Totally lifted flooring and all. And it was anchored down. Went over the power lines and it was thrown across the backyards of the two houses in back of us," Luke Dickerson said.

His daughter and two kids were inside their home when the tornado hit.

"She heard trees falling and metal twisting," he continued. "She took up the two children and put them in the bathtub and stayed in there for about a minute and a half and was terrified."

At least three houses were damaged. A number of others were roughed up a bit.

From Pinellas to Polk, clean-up continues after tornadoes ripped through area

After ripping through the neighborhood, the EF-1 tornado skipped one street over to the Hilltop Food Market convenience store. It took down a sign and knocked out the air conditioning unit.

"Two customers ran inside the store and hid underneath the shelving and all that," owner Yogi Patel said.

Leavitt is still in shock. His home is gone; his beloved classic Mustang, motorcycle, and truck all trashed. 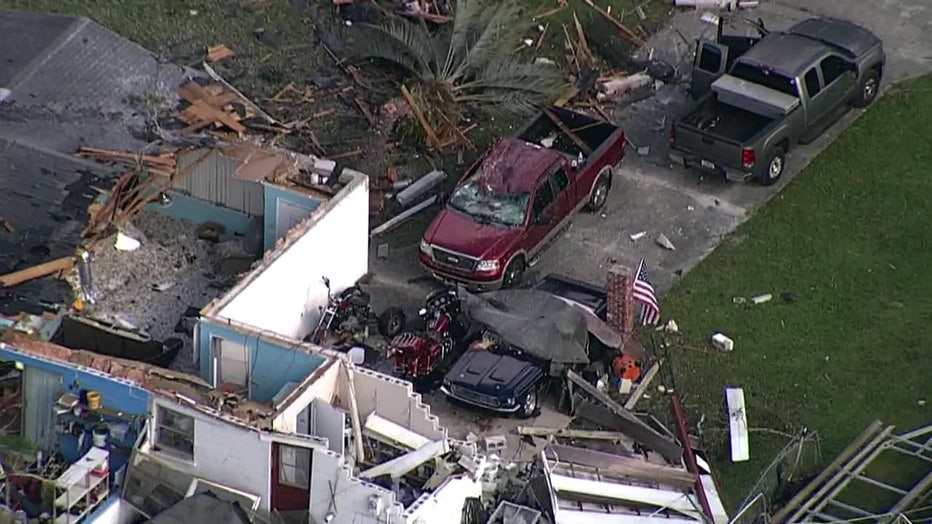 Scott Leavitt's Mustang, motorcycle, and truck were damaged and buried by debris, but he hung his American flag anyway.

Meanwhile, his cat Ash is nowhere to be found. He said he feels bad because when he rescued her, he made a commitment to take care of her for the rest of her life, never guessing something like this would ever happen.

"I know things can be replaced, but you work your tail off all your life, and it’s all gone in a couple of seconds," he added.