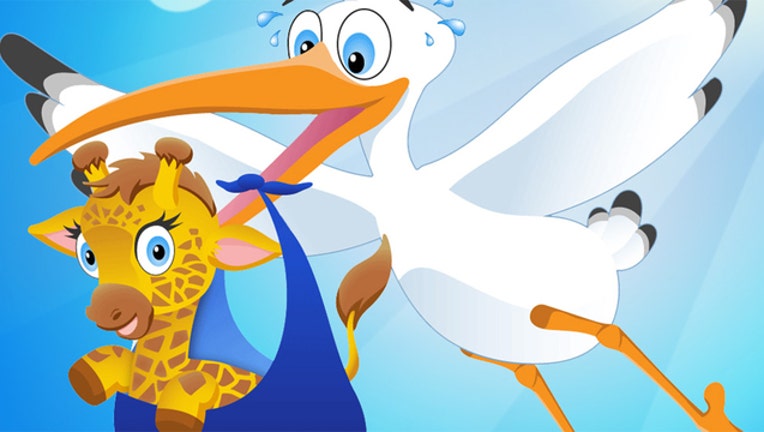 HARPURSVILLE, New York (FOX 13) - After months of anticipation, Animal Adventure Park announced April the giraffe was finally in active labor, and shortly after 10 a.m., Saturday, April 15, she gave birth to a healthy baby boy. Fast forward to 44:00 in the video to see the moment baby arrives!

If you're not familiar with April's pregnancy or the park's story, check out one of our many stories on the topic.

In early February, the park began to prep its Facebook followers for an impending birth, launching a live camera view of its giraffe stalls. But after weeks with no signs of a baby, the park said its staff and veterinarian, Dr. Tim, may have been wrong about the conception date.

Millions have since tuned in on a regular basis to watch and wait for April to give birth. April's mate, Oliver is in an adjoining stall and can be seen pacing. He's probably been anxious for this moment to arrive.

The staff at Animal Adventure Park also stepped into the spotlight as April's fans bombarded comment threads with questions about the women and men seen entering the stalls.

Zoo keepers Alyssa, Corey, and Joel, plus the park's owner, Jordan, gave regular updates on the goings-on at the park and in the giraffes' stalls. Alyssa could regularly be seen just before bedtime in the stalls, feeding the giraffes special treats of carrots and lettuce.

WATCH: Giraffe born in front of park-goers at Memphis Zoo

At times, keepers were forced to stay overnight due to brutal winter weather battering the park. On a few occasions, winter weather managed to take down internet service - and the giraffe camera - concerning fans and sending park workers into a frenzy. They reported being bombarded with emails, calls and comments from April fans across the world when the camera would go down.

Conspiracy theories also plagued the park's comment threads from people claiming ideas from an elaborate April Fool's joke to April not actually being pregnant. The park maintained throughout the April frenzy that any and all conspiracy theories were just that.

Meanwhile, the park capitalized on April fever by launching a set of giraffe emojis, available for $2.99, shirts, plush toys, and text alerts with exclusive April-related content, available for a $4.99 subscription. The park also parted ways with its original sponsor at the end of February, making way for Toys R Us to capitalize on its established mascot, Geoffrey the giraffe. Since then, the Toys R Us logo has been synonymous with April and Oliver's live feed.

And as soon as the baby was born, the logo switched to Babies R Us. Well done, everyone!

The money the park earned as a result of April's popularity is going to good use. After launching a separate website for all things April - www.ApriltheGiraffe.com - plus securing a new sponsor, the park announced it would make a $25,000 to the Giraffe Conservation Foundation.

Now that April has given us all what we've been waiting for, we can surely look forward to the park's morning and evening Facebook updates including an overload of cuteness from a sweet baby giraffe calf. Until then, let's watch April madly lick the air in search of a carrot.

-Once the calf’s hooves appear, labor will be over within 30 to 60 minutes

-Male giraffes are taller and heavier than females

-The knobs on their heads are called ossicones

-They can reach speeds of up to 35 mph

-They live up to 25 years in the wild