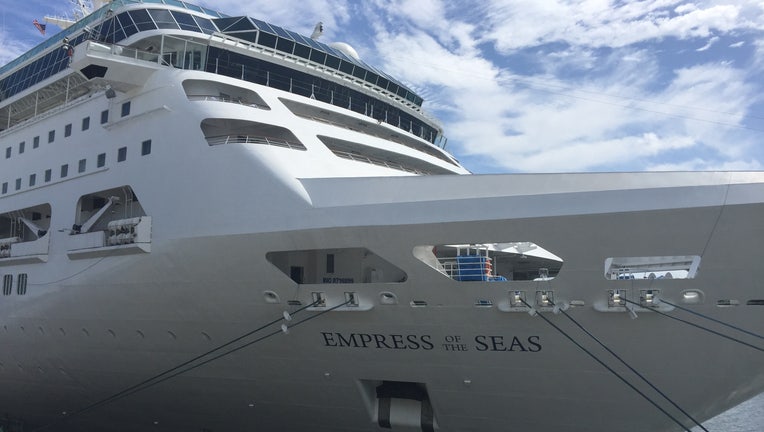 TAMPA, Fla. - A federal judge will hear arguments Thursday in Florida’s bid to block federal restrictions on cruise ships during the COVID-19 pandemic, while U.S. Department of Justice attorneys point to a return to cruising by mid-summer.

U.S. District Judge Steven Merryday will hold a hearing in Tampa on Florida’s request for a preliminary injunction against restrictions imposed by the federal Centers for Disease Control and Prevention. The hearing will come after the two sides reached an impasse in mediation aimed at settling the dispute.

The hearing also will come after the industry giant Royal Caribbean announced Friday that it plans to begin sailing from Florida ports in July and August.

Florida Attorney General Ashley Moody, backed by DeSantis, filed the lawsuit in April challenging restrictions imposed by the CDC that idled the industry after outbreaks aboard ships early in the pandemic in 2020. The lawsuit focuses heavily on a "conditional sailing order" that the CDC initially issued in October with a phased approach to resuming cruise-ship operations.

But U.S. Department of Justice attorneys filed a brief Monday that said, in part, recent developments "further undermine" the state’s arguments that an injunction is needed. Those developments include the CDC approving simulated voyages that involve testing cruise-ship operators’ ability to mitigate risks of the virus.

"Cruising is on track to resume by mid-summer, and Florida cannot establish an irreparable injury that would occur in the absence of an injunction," the brief said. "Plaintiff’s original motion was premised on the misconception that an ‘industry’ was ‘shut down’ indefinitely. That was never a valid characterization of the CSO (conditional sailing order), and it is demonstrably not the case now."

The federal restrictions have become tangled with decisions this spring by DeSantis and state lawmakers to ban businesses --- including cruise ships --- from requiring what are known as vaccine "passports" that would show people have been vaccinated against COVID-19.

Opposing the federal restrictions also has become a high-profile political issue for DeSantis, whose office blasted the CDC last week after the impasse was reached in the settlement talks.

"Unfortunately, the CDC has opted to continue its ridiculous and unlawful regulations that target a single industry by imposing vaccine requirements --- something no other business or industry must do," a news release from DeSantis’ office said.

Royal Caribbean announced Friday that it plans to launch cruises from Miami on July 2 and from Fort Lauderdale on July 3.

"Guests are strongly recommended to set sail fully vaccinated, if they are eligible," the company said in a news release. "Those who are unvaccinated or unable to verify vaccination will be required to undergo testing and follow other protocols, which will be announced at a later date."

The news release also said "Royal Caribbean is continuing discussions with the U.S. Centers for Disease Control and Prevention and multiple state, local and port authorities in the U.S. and with various destination communities regarding the various requirements for the upcoming sailings."

The state’s lawsuit contends that the CDC exceeded its authority with the restrictions and that the conditional sailing order is "arbitrary and capricious." Also, it alleges that the CDC has violated the Administrative Procedure Act, which deals with how agencies impose regulations and carry out laws.

Department of Justice lawyers have countered by saying the federal government has long had authority to regulate ships to prevent the spread of communicable diseases.

During the hearing Thursday, Merryday also likely will take up arguments about a law signed last month by President Joe Biden that is known as the "Alaska Tourism Restoration Act." The law provides temporary standards for cruise ships going to Alaska.

In the brief filed Monday, Department of Justice attorneys reiterated arguments that the law ratified the conditional sailing order issued by the CDC. The brief argued that with the ratification, Congress "not only confirmed that the CDC had the statutory authority to issue the order, but also extinguished" Florida’s claims under the Administrative Procedure Act.