Assange supporters celebrate as British court rejects extradition to US

Supporters of Wikileaks founder Julian Assange celebrate outside the Old Bailey court in central London after a judge ruled that Assange should not be extradited to the United States to face espionage charges. (Credit: Andela Milivojevic via Storyful)

LONDON - A British appellate court opened the door Friday for Julian Assange to be extradited to the United States on spying charges by overturning a lower court decision that the WikiLeaks founder’s mental health was too fragile to withstand incarceration in America.

The High Court in London ruled that U.S. assurances about Assange’s detention, received after the lower court decision, were enough to guarantee he would be treated humanely. Assange's lawyers say they will ask to appeal.

In the ruling, the High Court directed the lower court judge to send the extradition request to Home Secretary Priti Patel, who would make the final decision on whether to send Assange to the U.S. for trial.

"There is no reason why this court should not accept the assurances as meaning what they say," a two-judge panel of the High Court said in its ruling. 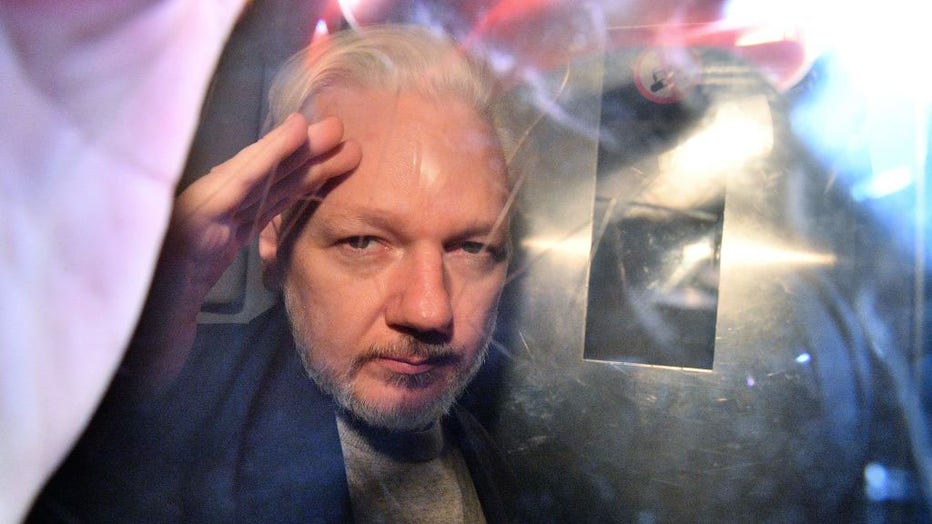 FILE - WikiLeaks founder Julian Assange gestures from the window of a prison van as he is driven out of Southwark Crown Court in London on May 1, 2019, after having been sentenced to 50 weeks in prison for breaching his bail conditions in 2012. (Phot

Since WikiLeaks began publishing classified documents more than a decade ago, Assange has become a lightning rod for both criticism and veneration.

Some see him as a dangerous secret-spiller who endangered the lives of informers and others who helped the U.S. in war zones. Others say WikiLeaks has publicized official malfeasance that governments wanted to keep secret.

Both views have been debated as Assange has sought his freedom — and to evade the Americans.

The U.S. has asked British authorities to extradite Assange so he can stand trial on 17 charges of espionage and one charge of computer misuse linked to WikiLeaks’ publication of thousands of leaked military and diplomatic documents.

RELATED: Amnesty International calls for charges to be dropped against Julian Assange

Assange’s fiancée, Stella Moris, called Friday's decision a "grave miscarriage of justice" that threatens the rights of journalists everywhere to do their jobs without fear of retaliation by governments that don’t like what they publish. She said Assange’s lawyers would seek to appeal.

"We will fight," Moris said outside the court, where supporters chanted and waved banners demanding Assange’s release. "Every generation has an epic fight to fight and this is ours, because Julian represents the fundamentals of what it means to live in a free society."

Assange, 50, is currently being held at the high-security Belmarsh Prison in London. The High Court ordered that he remain in custody pending the outcome of the extradition case.

Assange has been in detention since he was arrested in April 2019 for skipping bail during a separate legal battle. Before that, he spent seven years holed up inside Ecuador’s Embassy in London. Assange sought protection in the embassy in 2012 to avoid extradition to Sweden to face allegations of rape and sexual assault.

Sweden dropped the sex crimes investigations in November 2019 because so much time had elapsed.

In January, District Judge Vanessa Baraitser rejected the U.S. request to extradite Assange, saying the Australian citizen was likely to kill himself if held under harsh U.S. prison conditions.

U.S. authorities later provided assurances that Assange would not face the severely restrictive conditions that his lawyers said would put his physical and mental health at risk.

If convicted, Assange won’t be imprisoned at the "supermax" penitentiary in Florence, Colorado, the highest-security prison in the United States, American authorities promised the court. They also pledged that he wouldn’t be held under "special administrative measures," which can include segregation from other prisoners and the loss of privileges such as visits, correspondence and use of the telephone.

They also said he would be eligible to serve any prison sentence in his native Australia.

The charges Assange faces carry a maximum sentence of 175 years in prison, though lawyers for the U.S. have told British courts that the longest sentence ever imposed for such an offense was five years and three months.

Lawyers for Assange argue that their client shouldn’t have been charged because he was acting as a journalist and is protected by the First Amendment of the U.S. Constitution that guarantees freedom of the press. The documents he published exposed U.S. military wrongdoing in Iraq and Afghanistan, they say.

Barry J. Pollack, a lawyer for Assange in the U.S., called Friday's decision "highly disturbing," citing unfounded allegations that the U.S. plotted to kidnap or kill his client.

"The U.K. court reached this decision without considering whether extradition is appropriate when the United States is pursuing charges against him that could result in decades in prison, based on his having reported truthful information about newsworthy issues such as the wars in Iraq and Afghanistan," he said.

Human rights advocates argue that the U.S. government wants to stifle its critics. While the British High Court was not ruling on the merits of the charges, the extradition proceedings have opened a broader discussion about Assange's case.

Amnesty International’s Europe director, Nils Muižnieks, said the indictment "poses a grave threat to press freedom both in the United States and abroad."

"If upheld, it would undermine the key role of journalists and publishers in scrutinizing governments and exposing their misdeeds — and would leave journalists everywhere looking over their shoulders," Muižnieks said Friday.

But so far, the court has opted to ignore these issues all together, said Nick Vamos, the former head of extradition at the U.K.’s Crown Prosecution Service. Now that the American assurances, have been accepted, Assange would have to base his appeal on other matters he raised in the district court — all of which had been rejected in the past.

"All of the political heat is interesting for the media, but for the extradition court, they don’t seem to be concerned about it," Vamos told the BBC.

Vamos said that if Assange is given permission to appeal, the case could go on for another six months. If the courts decide he has no grounds for appeal, it could be over as soon as January.

"We had a phrase when I was working on the extradition team at the CPS ... that extradition isn’t over until the wheels are up on the plane," he said. "Anything can happen, even at the last second."