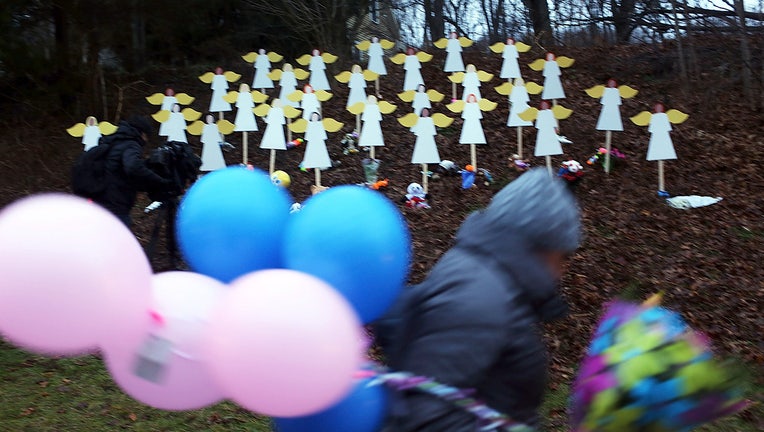 Twenty seven wooden angles stand in a yard down the street from the Sandy Hook School December 16, 2012 in Newtown, Connecticut. (Photo by Spencer Platt/Getty Images)

TALLAHASSEE, Fla. - The U.S. Supreme Court on Monday declined to take up an appeal by a former Florida Atlantic University professor who contended he was fired in retaliation for blog posts questioning the 2012 massacre at Sandy Hook Elementary School in Connecticut.

Justices, as is common, did not explain their reasons for declining to hear the case filed by James Tracy, who contended that the university violated his First Amendment rights.

Tracy, who was fired in late 2015 from his tenured post in the university’s School of Communications and Multimedia Studies, took the case to the Supreme Court after losing in U.S. district court and at the 11th U.S. Circuit Court of Appeals.

Tracy drew widespread attention for blog posts questioning whether the Sandy Hook massacre --- in which a gunman killed 20 children and six adults --- had occurred. In a petition asking the Supreme Court to take up the case, Tracy’s attorneys described the blog, which was not part of the university, as "notorious and widely criticized."

But Tracy’s attorneys took aim at a university conflict-of-interest policy that requires faculty members to disclose outside activities. The appeal alleged that the university used the policy "as purported justification to terminate" Tracy for not disclosing information about the blog.

The petition, filed at the Supreme Court in July, contended that the policy was unconstitutionally vague, chilled speech and gave the university "unbridled discretion to engage in content-based viewpoint discrimination against employees."

"(The) vagueness of the policy is particularly dangerous because it operates to inhibit the fundamental First Amendment freedom of public university employees to speak on issues of public concern and engage in other expressive conduct," the petition said. "It is entirely unclear, for example, whether the policy applies to speech activity such as uncompensated personal blogging, social media posting, or even article and op-ed writing."

But in a brief filed in October, attorneys for the university wrote that Tracy’s "blog speech was not a motivating factor in FAU’s decision to discharge him from employment."

The brief said Tracy was fired for "gross insubordination" after he refused to comply with reporting requirements that were part of a faculty collective bargaining agreement.

"As both the district court and the Eleventh Circuit observed, Tracy is in this position for one reason: He obstinately refused, for reasons he has never cogently explained, to simply complete the required disclosure report," the brief said.

In rejecting Tracy’s arguments in November 2020, a three-judge panel of the Atlanta-based appeals court upheld a jury’s decision on the First Amendment issue and a district judge’s rulings against Tracy on other issues.

"To establish that he was discharged in retaliation for protected speech, plaintiff had to prove, among other things, that his speech played a ‘substantial part’ in the university’s decision to terminate him," the appeals-court opinion said. "The jury found that plaintiff had failed to do so, as it found that plaintiff’s blog speech was not a motivating factor in the university’s decision. We conclude that there was more than sufficient evidence to support the jury’s verdict."