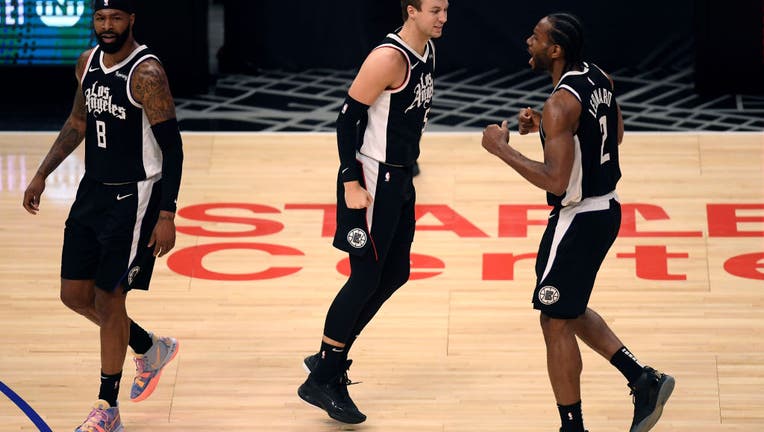 LOS ANGELES - In a thriller at Staples Center and with both teams on the brink of elimination, the Los Angeles Clippers defeated Luka Dončić and the Dallas Mavericks on Sunday afternoon. The Clippers have now advanced to the second round of the NBA playoffs.

The win comes just three days after the LA Lakers were dethroned by Phoenix and were eliminated from the playoffs on Thursday night.

The do-or-die win also comes after Kawhi Leonard’s iconic 45-point showdown in front of a sold-out roaring crowd in Dallas on Friday night.

Sunday afternoon showed how dangerous the Clippers are as a team. Instead of relying heavily on Leonard who ended Game 7 with 28 points, the difference came from the contribution of every player thrown in the rotation. 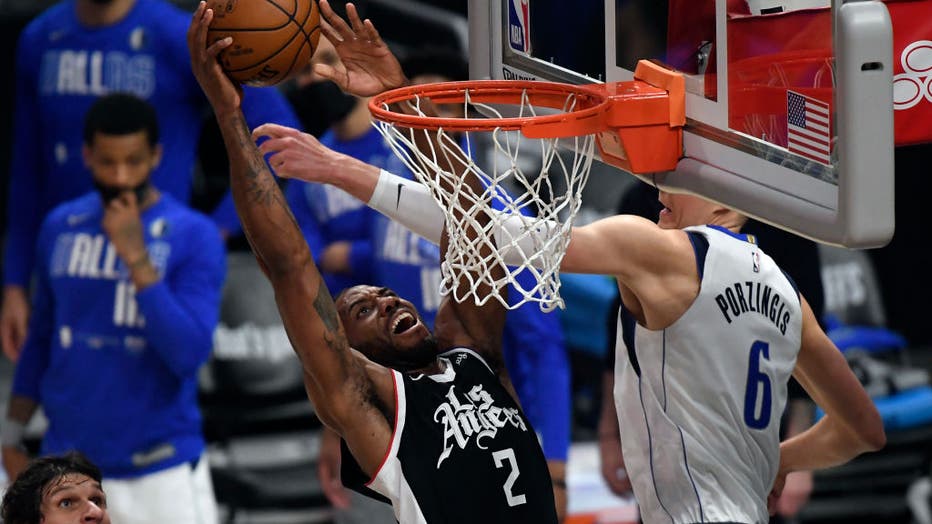 LOS ANGELES, CA - JUNE 06: Kawhi Leonard #2 of the Los Angeles Clippers dunks the ball against Kristaps Porzingis #6 of the Dallas Mavericks during the second half of Game Seven of the Western Conference first round series at Staples Center on June 6

Unlike in Game 6, the Clippers' role players stepped up to the challenge in Game 7. Terance Mann was called in during the first quarter and was a force on the court, scoring 13 points in the first half. Leonard and Paul George also had 13 points each at the half.

With his twin Markieff Morris (LA Lakers) rooting him on from the sidelines, Marcus Morris was extraordinary from the three-point line. However, Morris found himself in foul trouble with three fouls in just the second quarter, which temporarily limited his playtime. He kept his momentum in the second half, ending the game with 23 points.

Nicolas Batum played for 42 and scored 11 points, while Luke Kennard made the most of his 15 minutes, scoring 11 points, including some impressive three-points shots.

When it looked like the Mavericks had the potential to catch up, the Clippers shut it down. With 11 minutes and 43 seconds left on the clock, the Clippers were up 100-85.

During the fourth quarter, the Mavericks had a nice run and were able to cut to lead to 7 points before the Clippers took back control of the game.

Game 7 didn't feature George at his best offensively, but he has been a consistent defensive weapon and proved why he earned the nickname "Playoff P." George finished with 22 buckets and Reggie Jackson finished with 15.

What about "Playoff Rondo?" Rajon Rondo missed several shots and during his nine minutes of play, he underwhelmed with 3 points.

Dončić was explosive for Dallas as expected and finished the game with 46 points. Still, it wasn't quite enough.

Overall, the Clippers were seamless under pressure and as a united front, won with a final score of 126-111.

"We just fought hard. We never gave up. We know what type of team we were. We all watched film, we wanted to get better and we did it on the defensive end," Leonard said in a post-game interview.

The team also collectively made 20 three-point shots, which is the most in a Game 7 in NBA history, according to the Elias Sports Bureau.

Now, Los Angeles heads to Salt Lake City to take on the number one seed, Utah Jazz in the Western Conference semifinals. 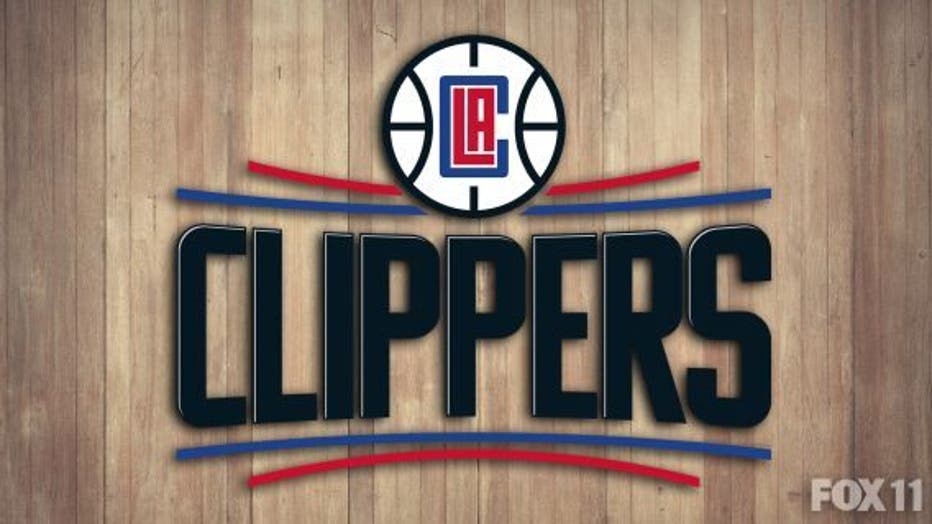 SERIES AT A GLANCE

In order to make it to Round Two, the Clippers had to do something they hadn't done in this season’s playoffs so far: win at home.

The Clippers have been able to turn the series around and avoid being swept after starting off 0-2 and having no solutions for Doncic.

Once the Clippers arrived in Dallas, there was a massive shift. Game 3 had a bizarre, nightmarish start for Los Angeles, and somehow, they managed to come out on top by 10 points.

Game 4 was a disaster for Dallas and Los Angeles refused to cut them any slack in the offensive extravaganza.

The Clippers were given multiple opportunities to win in Game 5 but came up short by 5 points due to turnovers and crucial missed shots in the final minutes of the fourth quarter. It was also a visibly off night for Leonard.

Leonard, also known as "The Klaw," put on a dynamic performance in Game 6 on Friday night, reminding the league why he is a two-time NBA Finals MVP.

Fans of the Clippers have every right to be frustrated the game even went to seven games, as it may have been an unwelcome reminder of what happened when they blew a 3-1 lead and lost in Game 7 to Denver in the NBA Bubble in 2020.

When asked about that in a post-game interview, Clippers head coach Ty Lue said: "Last year was last year…that [expletive]'s over."

Many NBA fans have been dreaming of a Western Conference Finals matchup at Staples Center between the Los Angeles Lakers and Clippers since 2019 and for the second year in a row, the Battle of Los Angeles will not happen. The Clippers were unable to make it out of the semifinals last season and this season, the Phoenix Suns sent the defending champions home on an early summer vacation on Thursday night.

Even rapper and LA native Snoop Dogg, who has been loyal to the Lakers his entire life, said the Clippers were the better team on social media after the Lakers’ meltdown and 30-point blowout loss to Phoenix in Game 5.

For what it’s worth, the Clippers beat the Lakers in all three of their matchups this season.

The 2020-21 scores between the LA teams were are listed below:

This postseason brings fresh blood and highlights that we have entered into a new era in the NBA. Not only is it the first time since 2010 neither LeBron James or Steph Curry will be in the NBA Finals, but it’s also the first time since 1998 that the finals will not feature any of the following four teams: the Los Angeles Lakers, Golden State Warriors, San Antonio Spurs or Miami Heat.

Eight NBA teams remain in the fight to become champions.

No James Harden? No problem. After losing Harden just one minute into the game with an apparent hamstring injury, the Brooklyn Nets were still dominant over Milwaukee in Game 1 of the Eastern Conference semifinals, kicking off the series with an 8-point win.

The Denver Nuggets and Phoenix Suns will duke it out for a trip to the Western Conference Finals. Phoenix grabbed the league’s attention when they dethroned the LA Lakers, showcasing the talents of Devin Booker and Deandre Ayton. The team is well-coached by Monty Williams and also has a leader with a heart of gold in NBA veteran Chris Paul. The Suns are electric, but Denver’s roster is loaded and will challenge the young Phoenix squad offensively and defensively.

It was showtime at the Wells Fargo Arena on Sunday afternoon. Philadelphia, with Joel Embiid, had a brutal first half, going into halftime down 54-74. Doc Rivers made some rotation changes in the second half and the Sixers had a new dynamic and minimized the deficit, but could not close. However, they came close. Atlanta ultimately won 128-124. Will the 76ers find a defensive solution for Trae Young? The young star is fearless and will make every game in the series a must-watch. After all, he has proven he’s here to put on a show by not only entertaining us but more importantly, by winning.