Sixteen-year-old Kaylee Deitrick played a mini violin concert for him in his living room.

“You go through so much pomp and circumstance when you’re in the military,” he told FOX 13. “You have dignitaries and everything, but for someone to come to your house and play for you, it’s very special.”

Kaylee played for Bill as a special 'thank you' for his 20-plus years of military service in the U.S. Army.

Normally, she charges for what she calls a “violin-o-gram.” She plays three songs for about $40.

What she earns will eventually go towards college. 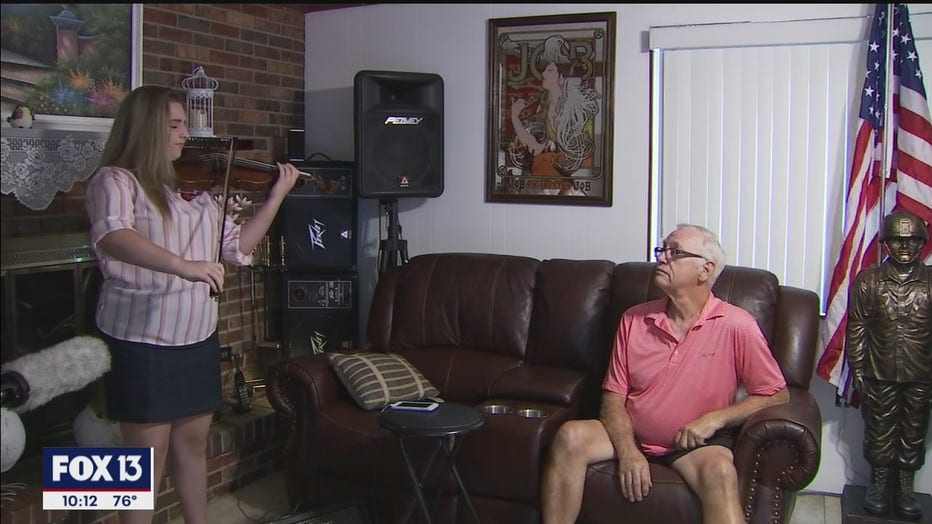 Right now, she is a senior at Harrison School for the Arts in Lakeland. She hopes to major in music at Florida State or Belmont University in Nashville.

Kaylee started playing the violin when she was 10 years old. No one else in her family is a musician, so it was a bit of a surprise for her family when she declared she had a passion for the violin.

But after just a few months of practicing, her parents became convinced that Kaylee had serious talent, when she played “Anchors Aw-weigh” for her dad who is a U.S. Navy vet.

Ever since, her life has been centered around perfecting her playing.

Bill was impressed, and emotionally moved.

“I was thinking about all the guys I was with,” said Bill. “So it really touched home.”

To find out more about Kaylee, go to her Facebook page, Swan City Strings.