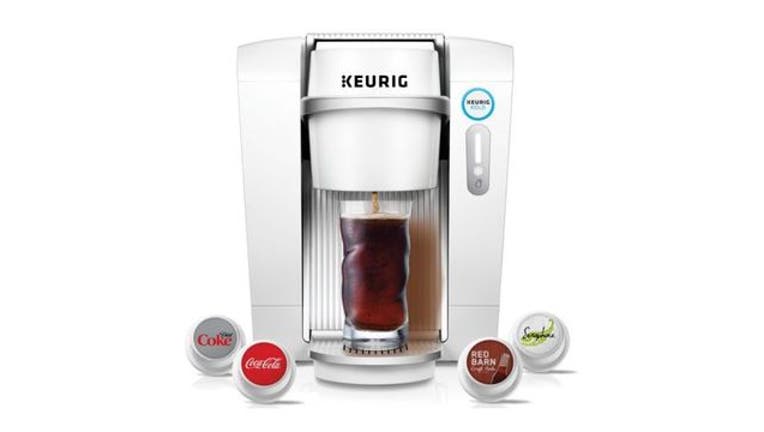 NEW YORK (AP) — Making a glass of Coke at home will soon be possible, if you don't mind paying more than $300 for a machine that sits on your kitchen countertop. Plus an extra dollar or so per drink.

Keurig Green Mountain says it will start selling a machine Tuesday that makes single servings of cold beverages including Coke, Sprite, Dr. Pepper and flavored seltzer waters. The machine is similar in concept to Keurig's brewers, which let people make cups of coffee and tea by inserting a pod into the machine and pressing a button.

Still, it's not yet clear who will buy the Keurig Kold, which is the size of a very large crockpot. Keurig says the suggested retail price for the machine is $369.99, but that prices could be as low as $299 depending on promotions. Each pod will cost between $1.12 and $1.25 and make an 8-ounce serving. That means it's not really a way to save money, since people can buy 2-liter bottles and 6-pack cans of soda for less, on a per-serving basis.

Instead, Keurig CEO Brian Kelley said Kold is a way for people to have a variety of drinks at their disposal, without having cans and bottles take up space in their homes. Among the other drinks the machine can make are "craft" sodas made by Keurig, and later this year, cocktail mixers.

"It's a premium — it's about choice and convenience," Kelley said.

The idea of making sodas and other drinks at home isn't new. SodaStream International also sells a carbonation machine that makes seltzer and other flavored drinks. But its machine differs from the Keurig Kold.

With SodaStream, people fill a bottle with water and press down on a button to carbonate the liquid. They can add as much carbonation and flavoring as they want. A complaint among some users is that the carbonation comes from a CO2 canister, which needs to be replaced every several weeks or so, depending on how often it's used.

The Keurig Kold, by contrast, is more controlled. People fill the machine's water tank, then insert a pod to create a specific drink, such as Coke. The pods have two chambers — one with the carbonation, and one with the syrup or flavor. The machine makes the drink in about 90 seconds or less, chilling the water in the process.

In addition to its high price, Phil Terpolilli at Wedbush Securities thinks a barrier to Kold's popularity will be that soda is already so widely available.

"The consumer can already can go into a fridge and crack open a Diet Coke," Terpolilli said.

Still, Keurig thinks its Kold machine could eventually be bigger than its coffee brewers, which it says are in about 17 percent of U.S. households. In addition to going on sale on its website Tuesday, the company says the Kold will be available starting in October at select retailers in Atlanta, Boston, Chicago, Dallas, Los Angeles and New York.

Those who don't want another machine taking up space on their countertop might want to wait a few years; Keurig says it's working on a machine that could make both hot and cold drinks.