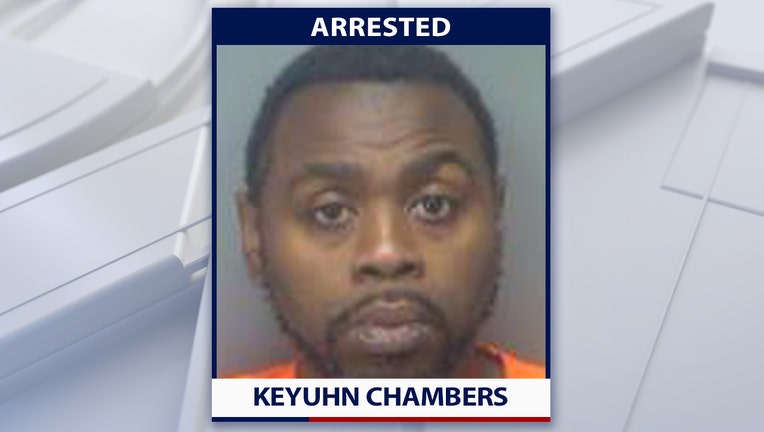 PINELLAS PARK, Fla. - A Pinellas Park man is facing homicide charges after a woman died and three others, including an infant, were taken to the hospital following a domestic disturbance that turned into a 'hazmat' situation Friday afternoon.

Police say they were called to the Clear Harbor Apartments, located at 11260 US Highway 19 N., around 1 p.m. because a man, later identified as Keyuhn Chambers, was seen with blood on his clothing along with blood in the breezeway of the apartment complex.

Inside the apartment, officers say they found Chrystal Williams suffering from multiple stab wounds and a baby with a garbage bag over its head. Williams and the baby were taken to an area hospital, where Williams died from her injuries.

The apartment building was evacuated until the Pinellas Park Fire Department was able to clear the building of the odor and any potential danger. Two first responders were transported to local hospitals for inhalation of the unknown chemical and have since been released.

PREVIOUS COVERAGE: A domestic disturbance turned into a deadly hazmat situation Friday afternoon at a Pinellas Park Apartment complex, according to the Pinellas Park Police Department.

Investigators say Chambers and Williams were married, but it is unclear what happened leading up to the stabbing and hazmat event.

Police say the four-month-old infant is the child of one of Williams’ friends. The infant was not injured but was taken to the hospital due to exposure to the unknown chemical.

Police say Chambers fled the scene on foot before they arrived. However, he was later located and taken into custody by responding officers with visible blood still on his clothing.