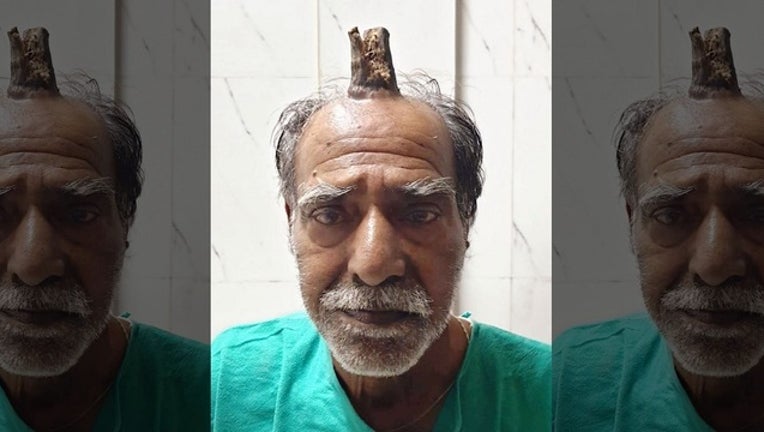 The man's barber had been shaving it down for him. (SWNS)

FOX NEWS - A man in India recently had a four-inch hornlike growth removed from his head after it began causing him pain, and after attempts to trim it by a local barber stopped being successful.

The 74-year-old reportedly injured his head about five years ago, which at first resulted in a lump, SWNS reported.

“Initially, he ignored it as it did not cause any discomfort,” Dr. Vishal Gajbhiye, told SWNS of his patient, Shyam Lal Yadav. “Also, he got the growth cut by the local barber. But, when the lump hardened and started growing further, he approached the hospital at Sagar.”

Gajbhiye said he diagnosed his patient with a sebaceous horn, also referred to in medical cases as a devil’s horn. It typically occurs in a sun-exposed area of the face and hands, and is made up of a keratin mound, according to a case report documented in the U.S. National Library of Medicine National Institutes of Health.

Gajbhiye removed his patient’s growth with a sterile razor and used a skin graft to close the opening in his head, which has “now healed completely,” according to SWNS. The growth was found to be benign, but he likely faces treatment in the future to prevent regrowth.

According to SWNS, Gajbhiye submitted the case to the International Journal of Surgery because of its rarity.