BETHEL PARK, Penn. - A married man who may have been leading a double life was arrested on Friday in connection to a missing Pennsylvania woman after telling police he lured her on a cross-country trip to Las Vegas and killed her in the desert, investigators said.

John Matthew Chapman, 39, allegedly confessed to murdering 33-year-old Jamie Rae Feden, who was last seen on Sept. 15, but so far has not been charged with homicide as investigators work to locate Feden’s body, the Bethel Park Police Department said. He is facing several charges, including kidnapping.

Chapman convinced Feden to take a cross-country trip with him from Pennsylvania to Las Vegas to look at homes in late September, WPXI-TV reported, citing court documents.

Around Sept. 25, he lured Feden out to the desert under the guise of a photoshoot, according to the document. He allegedly told police he used zip ties to bind Feden’s hands and feet and tied her to a signpost before covering her mouth and nose with duct tape and suffocating her. 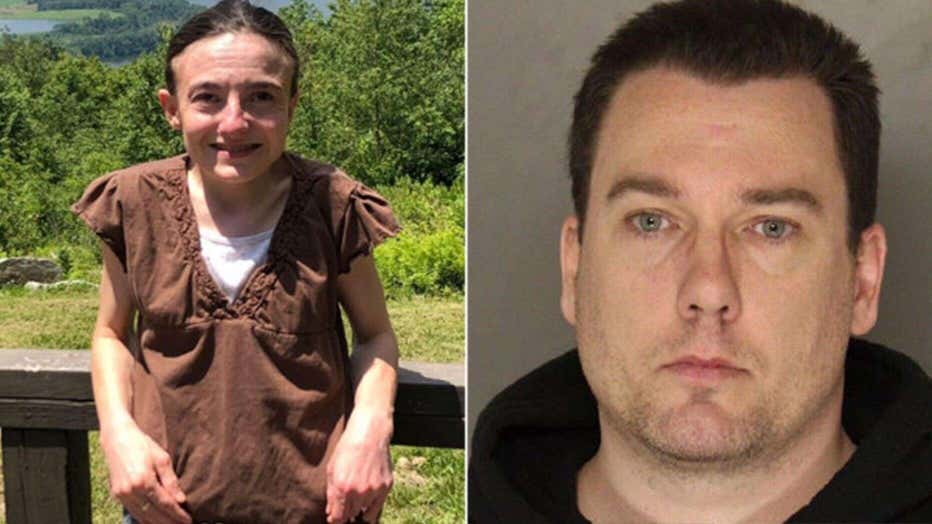 He removed the zip ties, tape and Feden’s clothing before leaving her body near the signpost and driving back to Pennsylvania, according to the document.

Feden was just over 4 feet tall and weighed 75 pounds, police said. She reportedly suffered from a rare congenital condition known as VATER syndrome.

While Feden was missing, police said Chapman sent her family messages on Facebook to cover up the disappearance and murder.

After he was taken into custody Friday, Chapman made a call from the police station to his wife Maureen. She told WPXI her husband said: “I killed her because I had to.”

She said her husband was living a "double life" after he told the family he was going to Las Vegas on a work trip.

Chapman was described as Feden’s boyfriend in a criminal complaint obtained by Pittsburgh station KDKA-TV. The complaint describes their relationship as “tumultuous.”

The body of an unidentified woman believed to be Feden was found on Oct. 5, authorities said. Police were working to positively identify the remains.

If Chapman is charged with homicide, he will likely be extradited to Las Vegas, police said.