EDGARTOWN, Mass. - Republican governors are escalating their partisan tactic of sending migrants to Democratic strongholds without advance warning, including a wealthy summer enclave in Massachusetts and the home of Vice President Kamala Harris, to taunt leaders of immigrant-friendly "sanctuary" cities and stoke opposition to Biden administration border policies.

The governors of Texas and Arizona have sent thousands of migrants on buses to New York, Chicago, and Washington, D.C., in recent months. But the latest surprise moves — which included two flights to Martha’s Vineyard Wednesday paid for by Florida — reached a new level of political theater that critics derided as inhumane. 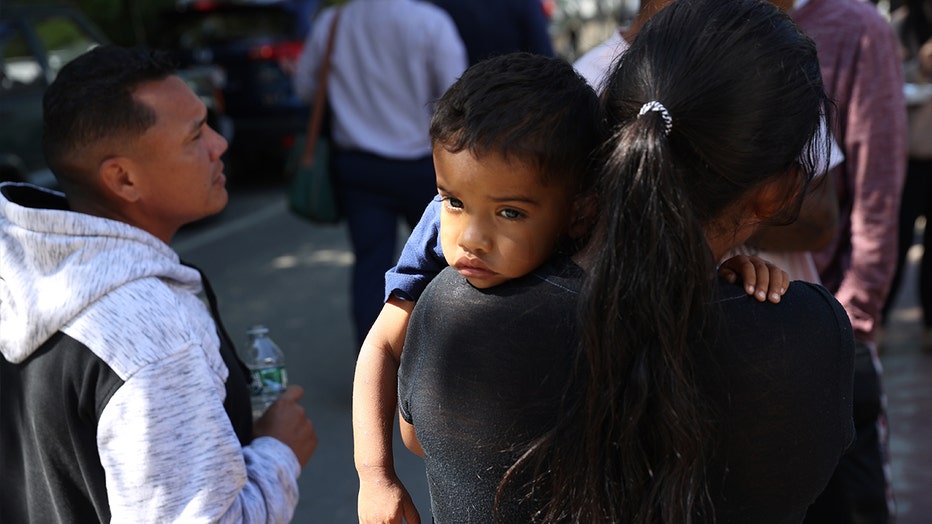 Martha's Vineyard, MA - September 15: A mother and child spent some time outside the St. Andrew's Parrish House where migrants were being fed lunch with donated food from the community. Two planes of migrants from Venezuela arrived suddenly Wednesday

Upon arrival in Martha’s Vineyard, where former President Barack Obama has a home, the migrants who are predominantly from Venezuela were provided with meals, shelter, health care and information about where to find work.

The vacation island south of Boston, whose year-round residents include many blue-collar workers, appeared to absorb the dozens of arrivals without a major hitch.

Elizabeth Folcarelli, chief executive of the nonprofit Martha’s Vineyard Community Services, was wrapping up work when she saw 48 Venezuelans with luggage and backpacks approach her office. They carried red folders with brochures for her organization.

Two planes filled with migrants were sent from Florida to Martha's Vineyard. Gov. Ron DeSantis' spokesperson said it was "part of the state’s relocation program to transport illegal immigrants to sanctuary destinations."

Migrants played soccer and hung out in small groups on the porch of their temporary shelter Thursday while meeting visiting attorneys who gave free advice and other service providers. 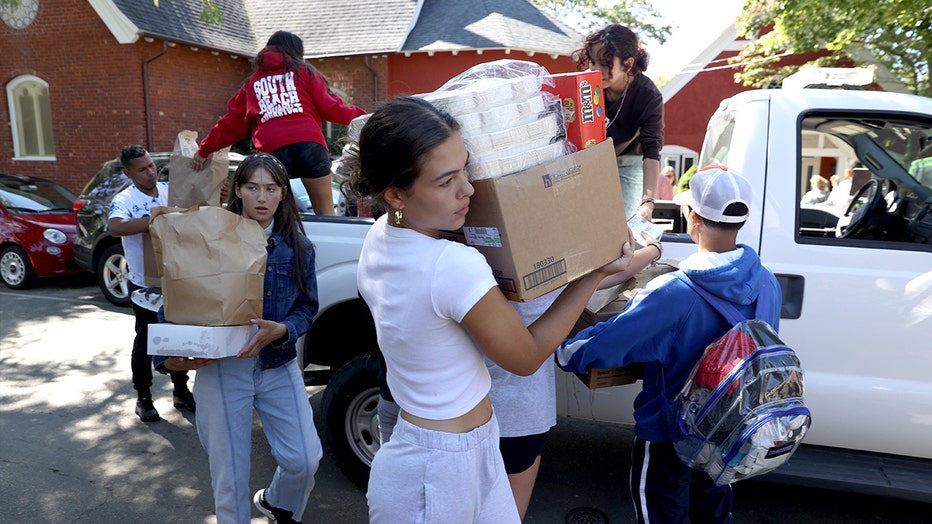 Well-wishers dropped off donations, and volunteers signed up to provide whatever help they could offer. There were no signs of protest.

MORE: 2 buses of migrants dropped off outside VP Harris’s residence near Naval Observatory in DC

The president of the League of United Latin American Citizens, Domingo Garcia, said that some of the migrants sent on buses from Texas to Washington, D.C. were "tricked" — an allegation that The Associated Press has not confirmed and that officials in Texas and Arizona have denied.

Florida Gov. Ron DeSantis said the flights to Martha’s Vineyard were part of an effort to "transport illegal immigrants to sanctuary destinations." The Florida Legislature has earmarked $12 million to transport "unauthorized aliens" out of state. 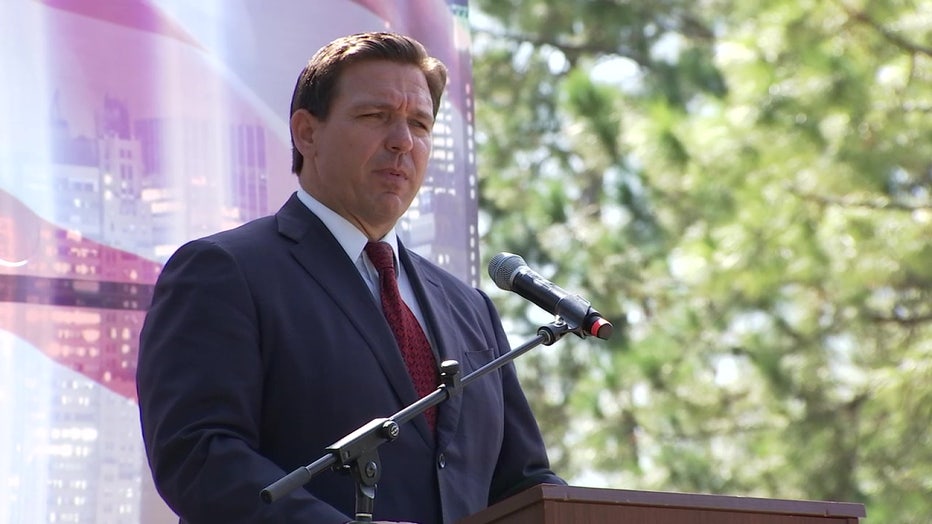 Governor Ron DeSantis marked the 21st anniversary of 9/11 at a ceremony in Clearwater.

DeSantis’ office didn’t answer questions about where migrants boarded planes and how they were coaxed into making the trip. 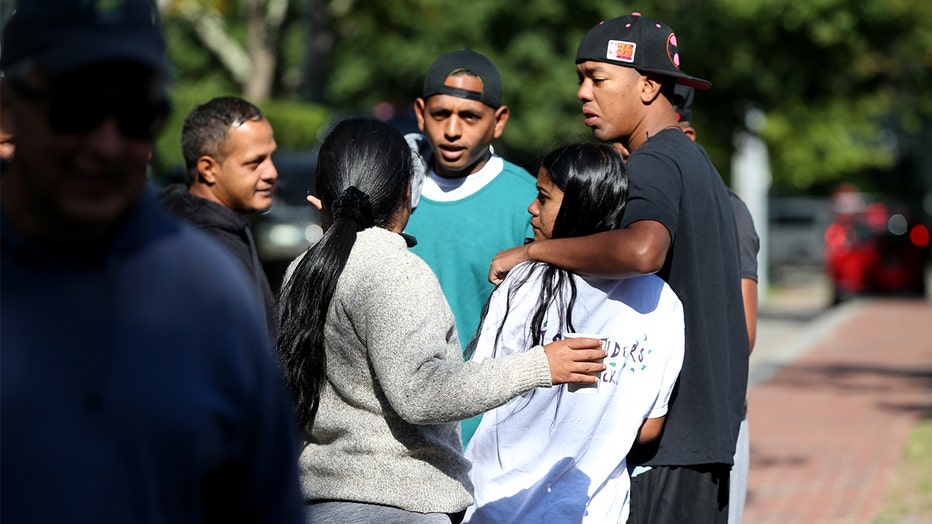 The two buses of migrants from Texas that arrived early Thursday outside Harris’ residence at the United States Naval Observatory carried more than 100 migrants from Colombia, Cuba, Guyana, Nicaragua, Panama and Venezuela.

"The Biden-Harris administration continues ignoring and denying the historic crisis at our southern border, which has endangered and overwhelmed Texas communities for almost two years," said Texas Gov. Greg Abbott, who has poured billions of taxpayer dollars into making border security a signature issue.

California Gov. Gavin Newsom, a Democrat who has publicly feuded with DeSantis and Abbot over their conservative policies, on Thursday asked the U.S. Department of Justice to investigate whether transporting migrants across state lines as "political props" broke the law. 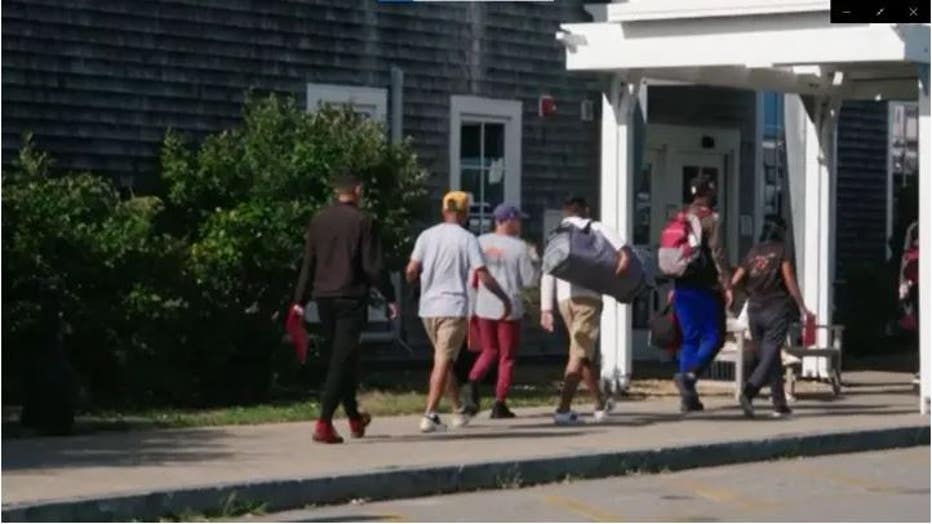 "Transporting families, including children, across state lines under false pretenses is morally reprehensible, but it may also be illegal," Newsom wrote in a letter to U.S. Attorney General Merrick Garland that he also posted on his Twitter account.

Without mentioning DeSantis or Abbot by name, Newsom suggested the federal government could bring charges of kidnapping and "civil rights conspiracy" because the migrants were targeted because of their national origin.

After migrants seeking asylum cross the U.S.-Mexico border, they spend time in a U.S. Customs and Border Protection facility along the border until they are generally released into the U.S. to wait out their cases. Republicans say Biden’s policies encourage migrants to vanish into the U.S.; Democrats argue the Trump-era policy of forcing migrants to wait out their asylum cases in Mexico was inhumane.

White House press secretary Karine Jean-Pierre said Thursday that federal officials were not told in advance by the Republican governors who sent the migrants to Massachusetts and Washington.

From June 2022: DeSantis says immigrants from Mexico are trying to get to Florida

"We aren’t a border state. People are wondering, ‘Why are you doing this?,'" DeSantis said. "People will say, ‘Let Texas or Arizona worry about that.' Let me tell you, people trying to come in illegally are trying to get to Florida." 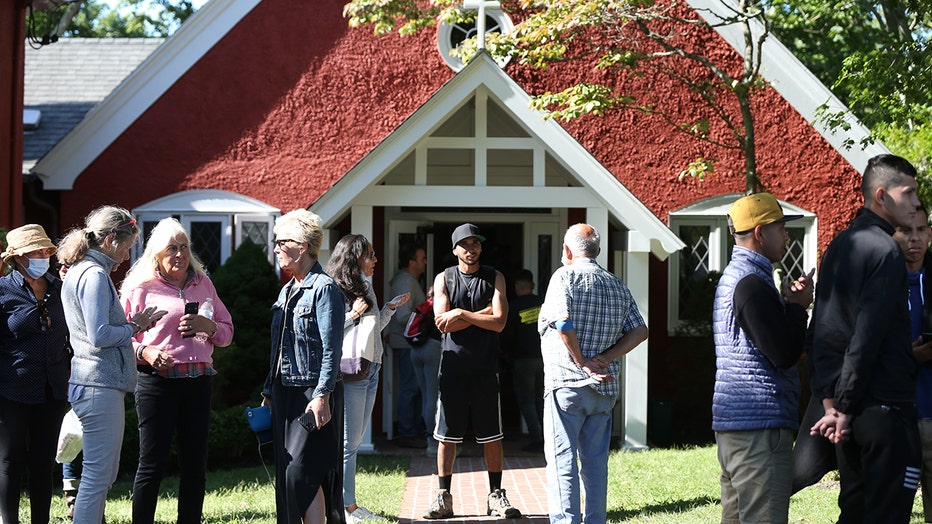 Martha's Vineyard, MA - September 15: Volunteers mingle outside of St. Andrews Episcopal Church. Two planes of migrants from Venezuela arrived suddenly Wednesday night on Martha's Vineyard. The migrants are being taken care of at the church for now.

DeSantis appears to be taking the strategy to a new level by using planes and choosing Martha’s Vineyard, whose harbor towns that are home to about 15,000 people are far less prepared than New York or Washington for large influxes of migrants.

Texas and Florida have infuriated officials in destination cities by failing to provide passenger rosters, estimated times of arrival and other information that would make it easier to prepare. In contrast, Arizona has coordinated with officials in other cities.

President Joe Biden is facing the same challenges that dogged his predecessor, former President Donald Trump: a dysfunctional asylum system in the United States, and economic and social conditions that are prompting people from dozens of countries to flee. 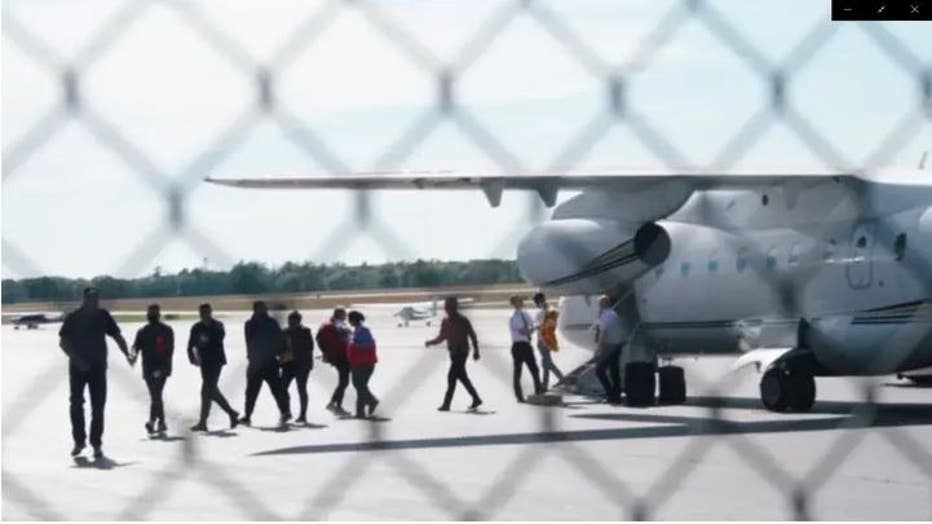 U.S. authorities stopped migrants crossing from Mexico about 2 million times from October through July, up nearly 50% from the same period a year earlier. Many are released in the United States to pursue their immigration cases because U.S. authorities have struggled to expel them to their countries under a pandemic-era rule that denies them a chance to seek asylum.

Some Republicans celebrated the latest delivery of migrants from border states.

"Welcome to being a state on the Southern border, Massachusetts," tweeted DeSantis spokesman Jeremy Redfern.

Stephen Miller, a chief architect of Trump’s immigration policies, said bringing "a few million" migrants to Martha’s Vineyard should transform the island of about 15,000 people into "a modern Eden."

Talia Inlender, deputy director of UCLA’s Center for Immigration Law and Policy, said the flights to Martha’s Vineyard appear to violate Florida law that they be limited to "unauthorized aliens."

"These folks are not unauthorized," she said. "They aren’t flying under the radar in any way."