A mother says she and her family are lucky to be alive after she tried a DIY reusable dryer sheet hack that she saw on TikTok, and she’s shared a warning about it on the app.

Hailee Clarke from the U.K. posted a video to TikTok at the start of November stating a fire started inside her dryer the same night she tried the laundry hack.

"I just wanted to spread some awareness. I tried this hack yesterday with a cloth, fabric softener and water as tumble dryer sheets in my tumble dryer," Clarke explained in her video. "This is the first time I’ve ever used it. I’ve never had a problem with it in any shape or form."

Clarke’s video goes on to show her destroyed dryer and laundry load, which have been badly burned.

"We were woken up this morning to the house filled with smoke," Clarke continued. "The dryer had been smoking, it was on fire from the inside through the night. It was absolutely terrifying. We’re lucky to be alive… Be careful of the hack that you try."

Fox News reached out to Clarke for comment. It is not immediately clear if the sponge and fabric softener combo is the direct cause of the alleged fire.

Several TikTok users left comments stating that it’s obvious that something like this could happen because most commercial fabric softeners have flammability warning labels. Though, many of these warnings are in reference to fabric softeners having the ability to degrade flame retardant chemicals in clothing and not the product itself, as seen in published safety data documents from Procter & Gamble’s Downy, Henkel’s Snuggle and SC Johnson’s Mrs. Meyers.

Clarke defended herself from critics in a follow-up video Thursday to show how she missed the flammability warning label printed on her fabric softener bottle, which isn’t as visually prominent when compared to her other household products she owns.

The American Cleaning Institute (ACI) does not recommend "this [fabric softener, water and sponge] home concoction," but the organization’s spokesperson did tell Fox News that families don’t have to worry about the safety of these laundry products on an individual basis.

"Liquid fabric softeners – as used in the washing machine – and dryer sheets are used safely by millions of people every week. You do not have to worry about liquid fabric softener residue after you take your clothing out of the washer," the ACI’s spokesperson wrote in an email. "It is important to use these products as directed and to read the fabric care labels of the garments you are laundering. You should not use dryer sheets with garments labeled flame-resistant or with children’s sleepwear."

The DIY dryer sheet hack with diluted fabric softener has been used for decades by people who want to either save money or avoid dryer sheet waste, and the hack has gained significant popularity on TikTok thanks to a number of viral "CleanTok" videos.

Colón learned the hack from her grandmother and has used the method on and off for years. So far, she hasn’t experienced any burning clothes or fires when using the dryer sheet hack in her dryer. When asked to review Clarke’s video, Colón said she noticed a few mistakes.

"The individual who attempted the hack cut the sponges in teeny tiny pieces, which can get stuck in the lint catcher. In all true honesty what the individual did was not the hack I posted. I did not post a video with teeny tiny sponges. [Also,] The solution did not look very diluted," Colón told Fox News. "If all of the solution is completely squeezed, the sponge is not ‘wet.’ It is damp with a scent. The way the individual handled the sponges in her video tells me she did not fully squeeze them before putting them in the dryer."

"A dryer should never be left on overnight and without any supervision. Just like a stove or oven should not be left on overnight without supervision," Colón continued. "Your dryer should be deep cleaned every single month inside and out and the lint catcher must be clean after every cycle. No one knows if this was properly done. The fire could have been started for a variety of reasons and not necessarily the sponge but if done properly this will NOT happen."

Colón reiterated that she shared her DIY dryer sheet hack as an available laundry option, but she does not do it all the time.

"It is an option I use if I don’t have dryer sheets," Colón said. "If you look at the comments, many individuals who have done this for years have never experienced such a thing, including myself." 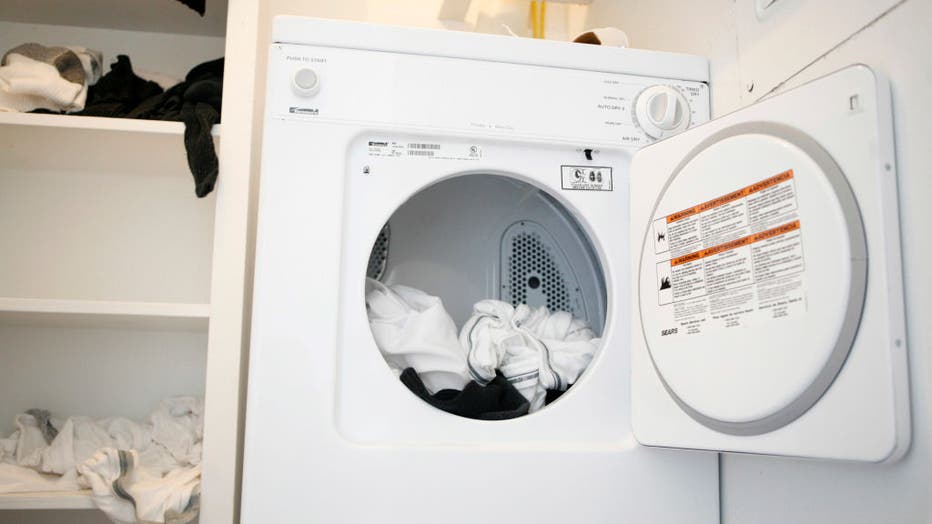 Clean laundry remains in a dryer in an apartment. (Photo by Eli Meir Kaplan/Getty Images)

She added, "A hack is a method that someone uses to do something that works for them. Every individual has complete and full authority to make a conscious decision to make an attempt to test something to see if it works or not do it at all."

Although some launderers have found success with creating DIY dryer sheets with diluted fabric softener, it is not an approved method by laundry manufacturers or the ACI.

"Please beware of any advice that recommends unproven chemical mixtures at home," the ACI told Fox News. "You should not be using liquid fabric softener in the dryer, only as directed in the washing machine. We strongly advise only using appliances and laundry additives as intended and directed per the manufacturers’ instructions."