TARPON SPRINGS, Fla. - Shoi Caballes was considered a mother to many children, not just her own. Thursday night at a vigil in her memory, she was remembered for her giving spirit after being tragically killed in a fire Wednesday at a Pinellas County gas station.

During a private gathering, Caballes' five children were joined by dozens of loved ones, all of who thought of her as a mom.

"The best and one-of-a-kind," said family friend Panteli Skaroulis. "She would do all the little things."

"So meticulous," said Chase Arnold, a family friend. "She never missed a birthday, never missed anything, at every event, just one of the kindest, most caring souls."

According to the Florida Highway Patrol, Caballes was pumping gas Wednesday afternoon at the Shell Circle-K on East Lake Road in Palm Harbor when another driver backed into the pump, knocking it down.

Caballes was pinned between the pump and her SUV, which caught fire.

Florida Highway Patrol troopers say a driver backed into a Pinellas County gas pump, setting off a blaze that killed another person who was pumping gas on the other side.

PREVIOUS: FHP: Children tried to save their mother from Pinellas gas station fire

Two of her children were in the car at the time. They got out and tried to help her. So did a good Samaritan, Jared Pierson, who's also homeless.

"I saw a child with a fire extinguisher trying to save their mom," Pierson recalled.

Despite their efforts, the flames were too much.

"I will never forget how tough those kids were," Pierson said. "I wanted to make sure I showed love for the family." 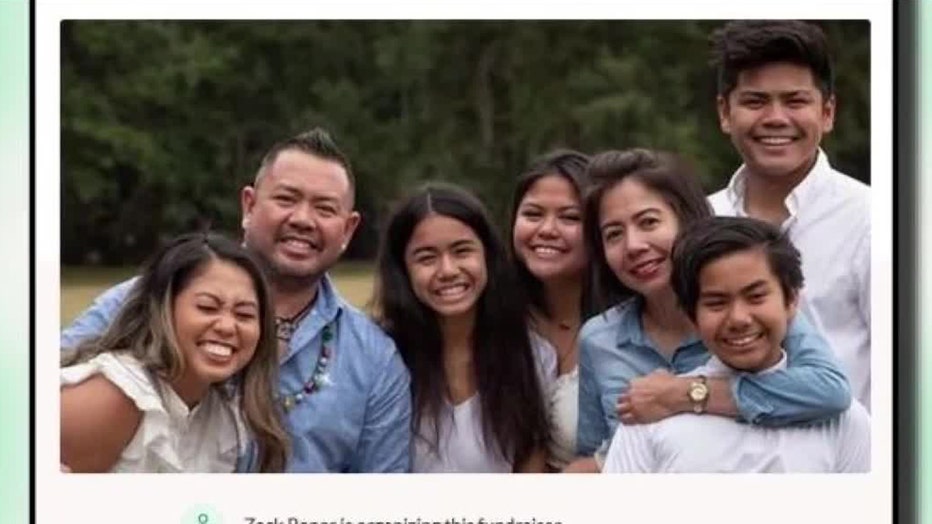 Thursday night, he and countless others gathered at Saint Ignatius Catholic Church in Tarpon Springs to support and pray with Shoi's family, some wearing blue and white, which were two of her favorite colors.

"Just such a big heart," said Arnold. "Everybody was family. It didn't matter who you were. If she met you for the first time or the last time, she treated you like family."

"Warm," "welcoming," "amazing," and "loving" were a few words that came up frequently to describe Shoi. She was a nurse and a woman of strong faith, always looking to help.

"It didn't matter how far the games were, she would attend them all, taking the little guys to piano practice, whatever it may be," Skaroulis said.

Now, the family known as a family to all is surrounded by love, at a time they need it most.

"Her life revolved around just making people happy, caring for them at their lowest low, being with them at their highest high," Arnold said. "She was just an all-around great mother and human being."

"Just one of the kindest, most caring souls."

An online fundraiser had raised nearly $80,000 for the Caballes family by Thursday night. It surpassed $100,000 Friday morning.

FHP has identified the driver who hit the gas pump as a 66-year-old woman from Palm Harbor. So far, no charges have been filed.