PHOENIX - A Maricopa County judge has denied Secretary of State Katie Hobbs' request to sanction Republican Kari Lake and her attorneys for their lawsuit contesting the 2022 election results, but has awarded thousands of dollars in court fees to the governor-elect.

On Dec. 27, Judge Peter Thompson ruled that Kari Lake would be ordered to pay the following to Hobbs:

The secretary of state had asked on Dec. 26 to sanction Lake and her attorneys, but that motion was denied.

"There is no doubt that each side believes firmly in its position and with great conviction," Thompson wrote in the ruling. "The fact that Plaintiff failed to meet the burden of clear and convincing evidence…does not equate to a finding that her claims were, or were not, groundless and presented in bad faith."

The judge had thrown out Lake’s challenge of her defeat in the Arizona governor’s race to Hobbs, rejecting her claim that problems with ballot printers at some polling places on Election Day were the result of intentional misconduct.

On Dec. 24, Judge Thompson had found that the court did not have any clear evidence of widespread misconduct that could have impacted the results of the 2022 midterm election.

During a two-day trial, Lake's team focused on ballot printer issues in Maricopa County, asking the judge to declare her governor or order a re-vote in the county.

The challenge was to prove that any misconduct was intentionally made to deny her victory.

According to court documents filed on Dec. 26, Hobbs filed an application for attorney's fees and expenses, requesting about $37,000 paid as a sanction.

The argument cites "character of work," saying that this was an expedited election proceeding requiring extensive work by her counsel. Hobbs also says that since Maricopa County Superior Court Judge Peter Thompson denied Lake's claim entirely and that Hobbs was victorious, her attorney fees should be paid back.

There could be more cost, however, as officials with Elias Law Group, which represented Hobbs, said there could be at least $450,000 in costs.

"Enough really is enough. It is past time to end unfounded attacks on elections and unwarranted accusations against elections officials," read a portion of the Motion for Sanction. "This matter was brought without any legitimate justification, let alone a substantial one."

Legal professional speaks out on motion

We spoke with a legal expert on the Motion for Sanctions.

"If you wanna play unfrozen caveman lawyer on your YouTube channel, that's one thing," said Ton Collins, Executive Director of the Arizona Citizens Clean Elections Commission. "If you want to go into a court of law and take up the court's time and invoke the entire legal process, you gotta do an adequate, professional investigation."

Collins says he is not surprised by the calls to sanction Lake.

"It demonstrates how this problem of election denial, and being unwilling to accept the results of a fair election and the rule of law and objecting to the rule of law come together, and create a real toxic problem," said Collins.

Collins said the case posed concerns for the future of elections.

"You are undermining not just the democratic process but using, leveraging the judicial process that protects all of us against itself for your own aims," said Collins.

Lake's lawyers have responded to Hobbs and Maricopa County's Motion for Sanctions, in a filing with the court.

According to the filing, Lake's lawyer argues that the claims were "substantiated, brought in good faith," and are a "matter of public concerns."

"Defendants’ motion for sanctions is not supported by case law or the record. Trust in the election process is not furthered by punishing those who bring legitimate claims as Plaintiff did here. In
fact, sanctioning Plaintiff would have the opposite effect," read a portion of the court documents we obtained.

Meanwhile, Lake had a tweet on her profile on Dec. 25 that claims the judge's decision to dismiss her case was ghostwritten. That tweet has since been deleted. 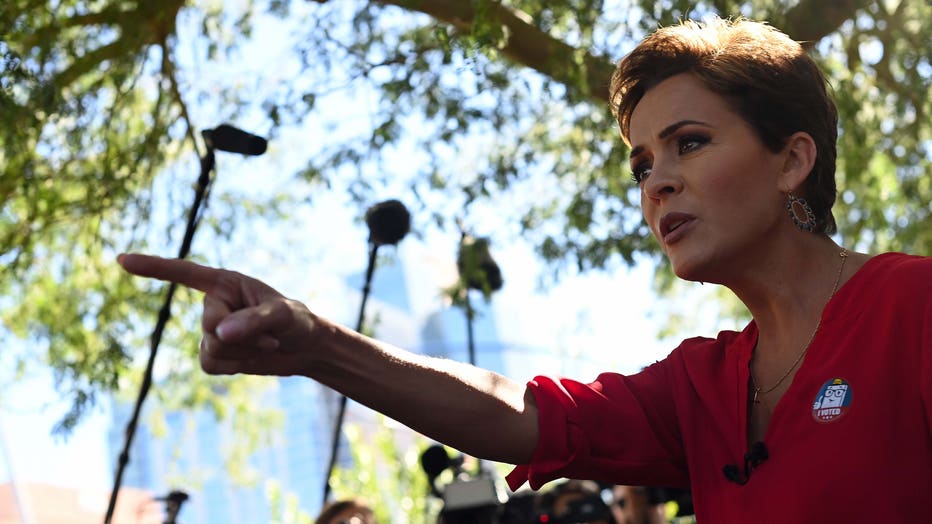 The motion for sanction came after a judge ruled against Lake in her lawsuit over the 2022 election, with the judge ruling that he found no intentional misconduct in the election. FOX 10's Justin Lum reports.

During a two-day trial, Kari lake presented her case for why election results in Arizona's gubernatorial race should be overturned.

In her lawsuit, Lake claims tens of thousands of voters were disenfranchised on Election Day, and cost her the election. FOX 10's Irene Snyder reports.

Lawyers for Republican gubernatorial candidate Kari Lake were back in court on Dec. 22 after her campaign filed a lawsuit challenging the results of the midterm election.

Dec. 21 was Day 1 of a two-day trial brought on by Lake, the Republican Party candidate for Arizona Governor. She was defeated by Democrat Katie Hobbs in the November election, but Lake has made various claims over alleged improprieties in the election. FOX 10's Steve Nielsen reports.