TAMPA, Fla. - You might not realize it but your cell phone and other mobile devices could be helping government leaders and medical experts plot the next steps in fighting COVID-19.

Through a process called geofencing, data scientists study the movement of people's mobile devices in the Tampa Bay area and how that movement correlates to hospital admissions, in hopes of using that data to slow the spread of the virus.

County leaders were initially concerned about privacy violations with this kind of technology, but Mullarkey made it clear that data collected through a third party vendor, and how it's used, comply with privacy protection laws.

"We don't know gender, we don't know age, and we don't care to know those items," Mullarkey said. "Every device that we have information on has actually been anonymized to the point that I can't identify the device ID."

Last month, Mullarkey showed the system in action to the Hillsborough County Emergency Policy Group. His presentation included comparison maps of virus cases on March 18, before the safer at home order was issued, and on April 5, four days later. 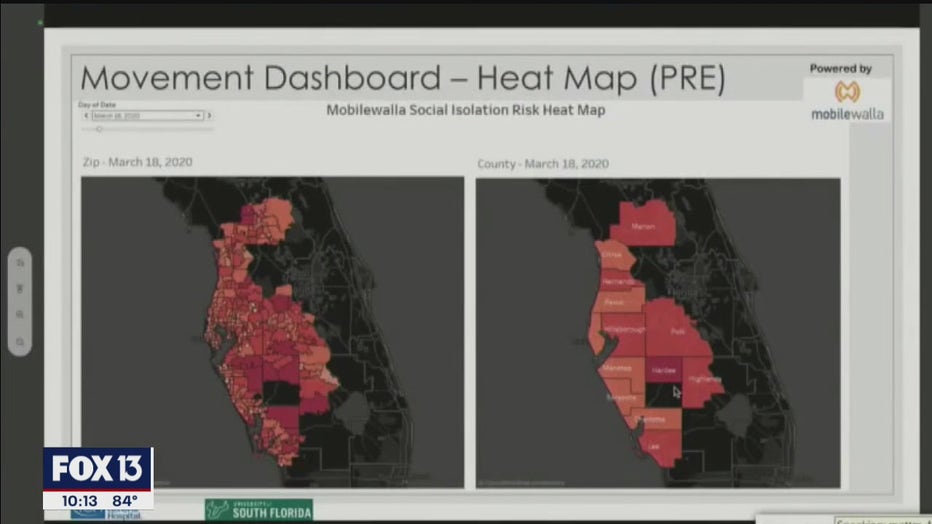 "We want to be able to use some of this movement dashboard to create those high-risk areas that we can then deploy those resources," Dr. Peter Chang with Tampa General Hospital said at the May 7 meeting.

With each phase of Florida's reopening, data scientists have seen numbers of "unique" and "dense" locations visited, double.

"When mobility changes, up or down, dramatically, 21 days later, we will see the number of admissions to the 52 hospitals in our region change," Mullarkey explained.

He noted that daily COVID-19 positive hospital admissions during the early stay-at-home orders were at about 20 a day. As of last week, they're seeing 40 to 50 a day.

"If nothing changes, our models are very clear that those admits will grow to 50, 60 and 70 admits a day across our 52 hospitals in July," Mullarkey said. "The virus just needs opportunity and every time we move and come into contact with others, we give it an opportunity."

This data being studied is specific to the Bay Area. It won't necessarily reflect the situation in cities like Orlando or Jacksonville.