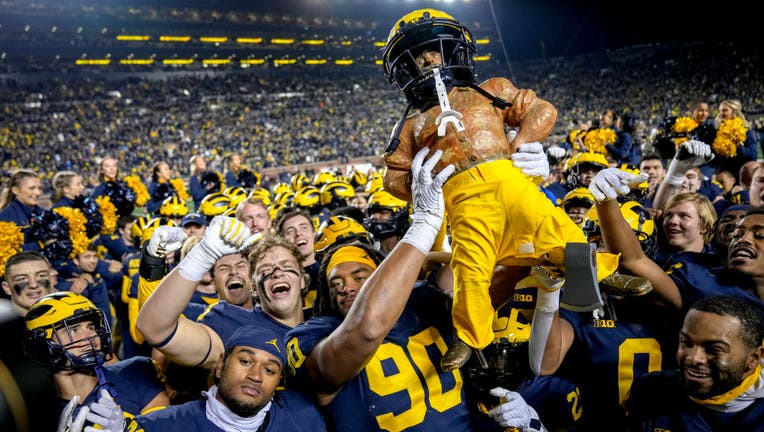 Mike Morris #90 of the Michigan Wolverines hoists the Paul Bunyan Trophy in the air after defeating the Michigan State Spartans at Michigan Stadium on October 29, 2022 in Ann Arbor, Michigan. (Photo by Nic Antaya/Getty Images)

ANN ARBOR, Mich. (FOX 2) - The Washtenaw County Prosecutor is moving forward with charges against seven Michigan State University football players after a brawl that took place after a game against the University of Michigan.

The charges include six misdemeanors and one felony against cornerback Khary Crump.

MSU had already suspended eight players following the fight which included one Spartan using his helmet against a Wolverine player. The brawl happened following Michigan's 29-7 win over the Spartans on Oct. 29.

The lone MSU player that was suspended but not charged is Malcolm Jones.

The charges are the latest development of an in-state rivalry game that became ugly after the final whistle blew. As players were heading to the locker room, fighting broke out under the stands between several MSU players and a Michigan player.

RELATED: No. 2 Ohio State, No. 3 University of Michigan rivalry set for another classic

Video from the evening showed a brawl involving at least 10 MSU players when two U of M players entered the Michigan Stadium tunnel.

In addition to the suspensions, MSU Head Coach Mel Tucker admonished the players involved in the fight, saying there was "no excuse for behavior that puts our team or our opponents at risk."