Nevadans voted yes to a new amendment that will legally protect same-sex marriage in its state Constitution.

Nevada has become the first state to recognize same-sex marriage in its state Constitution.

A measure on Nevada’s 2020 election state ballot asked voters whether they support an amendment recognizing marriage between couples regardless of gender.

“Shall the Nevada Constitution be amended to: (1) remove an existing provision that only a marriage between a male person and a female person may be recognized and given effect in Nevada; (2) require that the State of Nevada and its political subdivisions must recognize marriages of and issue marriage licenses to couples regardless of gender, and that all legally valid marriages must be treated equally under the law; and (3) provide that religious organizations and members of the clergy have the right to refuse to perform a marriage, and that no person has the right to make any claim against a religious organization or member of the clergy for refusing to perform a marriage,” according to the state ballot. 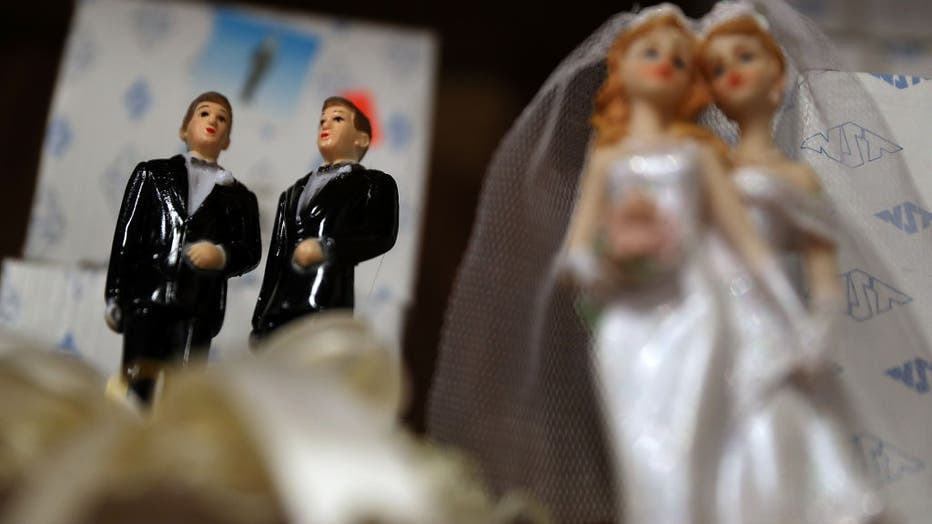 FILE - Same-sex marriage cake toppers are displayed on a shelf at Fantastico on December 5, 2017 in San Francisco, California.

Same-sex marriage rights have traveled a long and bumpy road in Nevada.

“In 2002, a ballot question was passed that defined marriage as only between a man and a woman,” according to the Reno Gazette Journal.

But Nevada’s LGBTQ community battled tirelessly for over a decade, and in 2014, the 9th U.S. Circuit Court of Appeals struck down Nevada’s gay marriage ban.

“It’s so exciting that it passed. It’s been a very long process," YeVonne Allen, program director for the Equity, Inclusion, & Sustainability Office at Truckee Meadows Community College told the Reno Gazette Journal. "Nevada was one of the few states in 2000 that voted to make [marriage] in its constitution between a man and a woman. Fast forward to the twenty-teens and people realized how bad it was to have that in our Constitution."