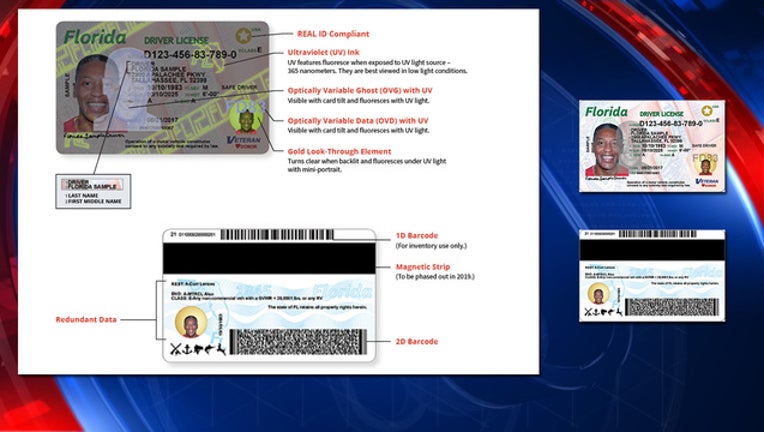 TALLAHASSEE (NSF) - Colorful high-tech driver's licenses and state identification cards, designed for added security and to cut down on fake IDs, will start rolling out across Florida this month.

But unless it's time to update a card because of an expiration date or a name or address change, there's no need to rush out for a new ID.

In the works since 2014, the new design will become available Aug. 21 at a driver's license office in Volusia County's Orange City.

“We are in the middle of reaching out to all of our stakeholders, and letting them know how to identify the new card, this is what it looks like, these are some of the security features you can look for,” said Alexis Bakofsky, a spokeswoman for the Florida Department of Highway Safety and Motor Vehicles. “Starting January 1, 2018, it will be the only credential that is issued in Florida.”

Intended in part to crack down on fake licenses, the state agency expects to spend $460,000 to complete the statewide rollout. The money comes from the state's Highway Safety Operating Trust Fund.

The agency did not provide information on how much it has spent on the redesign.

The card features nearly double the number of security features as the current card, Bakofsky said.

“Some you'll see. Some you will not see,” Bakofsky said. “That is to maintain security so that a law enforcement officer, or anyone who needs to authenticate that credential, can safely do so.”

Each card will have better safeguards, from features that appear only when viewed under ultraviolet light to a pastel-colored linear rendering of the Florida state seal and a large orange “FL.”

A head shot of the person who has been issued the card will appear in four locations, including one that is a part of a transparent background.

A red box will be affixed to the front for people under 21, stating when the cardholder will reach that age.

The back features an image of the state of Florida, the year 1845 in reference to the year of Florida's statehood and the word “Florida” amid blue lines representing ocean waves.

The information on the card will also be linked through two barcodes and a magnetic stripe on the back.

The state is working on a new feature to replace the magnetic stripe in 2019.